In the poem “Migration,” Brian Komei Dempster writes: “Only when I circle back, can I continue beyond.” This seems to be the motivation behind Dempster’s debut book of poetry, Topaz.

As Dempster indicates throughout the collection, his family members were among the more than 120,000 people of Japanese ancestry who were forcibly removed from their homes during World War II and sent to internment camps. Dempster’s family eventually ended up at the Topaz Incarceration Camp in Utah. The majority of his poems seek to understand the experiences that this family endured while they were incarcerated and the experiences that followed after the war. And as part of this desire to understand his place in all of this family history, Dempster writes that he needs to first actually find the memories of his family. In one of the poems, he writes about trying to get his grandmother to talk about her experiences, but she never directly answers his questions (“My Questions to Obachan, Her Answers”). Like many people who were taken to internment camps, his mother doesn’t want to speak of it. 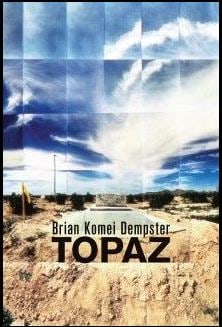 So in a way, Topaz is Dempster’s way of uncovering the family memories, of circling back for them. He writes of prayer beads and steamer trunks, and the poems seem to be those beads, each a meditation on a memory. Or they fit into the symbolic steamer trunk that Dempster references throughout as if it were the container of a collection of “letters, photographs, fragments of stories” (from “Crossing”). It is clear from the book’s dedication and notes that Dempster’s focus is on his family, with brief connections to other focal points of Asian American history beyond the Japanese American internment. But the poems about his family are the cornerstones of the collection. The opening poem, “Topaz,” begins, “I am the prism/refracting/your prison.” For Dempster, he is the prism, and through him, his ancestors’ experiences can be uncovered and remembered.

There are stylistic differences among the poems; some are longer narratives, some read like letters or meditations. But my favorite poems are the eight that are quite sparse, poems like “Topaz,” “Sheer,” and “Pearl.” These minimalistic poems linger, like those fragments of memory that all of us try so desperately to hold on to as time passes and events are drawn further back into the past. These are the poems that Dempster uses to pull the narrative of his own family together. And these are the poems that hold the collection together in a place that is solid and grounded, grounded in family and history, suffering and love.

Dempster visits Seattle from the University of San Francisco where he teaches to read and talk about his debut book of poetry entitled “Topaz.” The book follows the influence of the internment camp experience amongst Japanese Americans and traces the ramifications through generations of a family and a people.

On May 31, Brian Komei Dempster will do a program entitled “Japanese American Impisonment & Resettlement: The Power of Our Intergenerational Stories” with presentations by Janet Sakamoto Baba and Atsushi Kiuchi from the Pacific Northwest writing project. 7:00 p.m. at NVC Memorial Hall at 1212 South King St. The event is Co-presented with the Nisei Veterans Committee, Densho, The Japanese American Legacy Project & Elliott Bay Book Company. On June 1 at 3:00 p.m., Dempster reads with fellow poet Janet Norman Knox at Eagle Harbor Books at 157 Winslow Way E. on Bainbridge Island. On June 3, he will be at University Book Store (4326 University Way NE) at 6:00 p.m. in a reading entitled, “Asian Pacific American Poetry Across the Generations,” with poets Sharon Hashimoto, Arlene Kim and Alan Chong Lau with a special tribute reading of the poems of the late Kim-An Lieberman. Finally on June 5 at 6:00 p.m., the poet collaborates with his musician father Stuart Dempster, artist mother Renko Ishida Dempster, and storyteller Dee Goto in the theatre at the Wing Luke Museum (719 South King St). For details on all of his events, visit briankomeidempster.com/events.