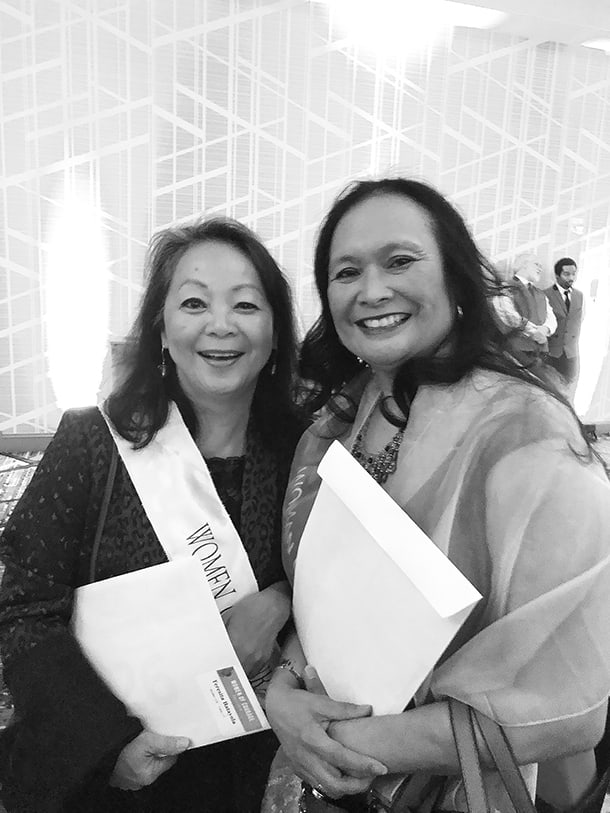 The word “revolution” can be synonymous with terms like metamorphosis, turning and transformation. The University of Washington Women’s Center seeks to recognize women who have brought liberation and revolution to the lives of women. Cindy Domingo has been a longstanding revolutionary, political activist, ardent feminist and community figure inside Seattle and beyond. Her efforts have sought transformation to women of the world. Were it not for world-shaking events, her life may have been different, and she would not be recognized by the UW Women’s Center for her ongoing activities.

As turmoil grew in the Filipino community locally and abroad during the 1980s, things changed from the woman she might have been. Cindy Domingo recalls that she was supposed to have attended college on a full scholarship to eventually become a pharmacist. Instead of that, Cindy declares, “I became an activist in the KDP and that just threw everything off kilter! It became my passion in life.” Destiny through tragedy called to Cindy, and she stood up stronger with the KDP (Union of Democratic Filipinos). She shifted from a would-be pharmacist in a lab, and turned into an activist standing on a global stage.

Many in the Asian American community and labor union movement keep in memory the tumult which occurred after Cindy’s brother Silme was assassinated by the Marcos regime of the Philippines. Silme Domingo was a member of the KDP and a large influence on many, including his family. Along with many friends she has edited a book with personal accounts of their struggle against Marcos, and their efforts as a movement during the difficult 1970s and violent 1980s.

Cindy has recently been travelling and giving talks since the release of the book, A Time to Rise: Collective Memoirs of the Union of Democratic Filipinos (KDP). She of course reflects on her brother, and other KDP members provide a personal insight on the revolution taking place inside of their relationships and homes. The book is a snapshot of Cindy’s starting line in activism, and the book represents one travelled waypoint that has led to her current honor as a Woman of Courage.

In attendance at the Women of Courage gala were many of Cindy’s professional and personal friends. One of these people, Seattle City Councilmember Lisa Herbold, has admired Cindy’s efforts as a political aide over the last couple decades. Councilmember Herbold can survey Cindy’s work within King County in a way that others may not be able to do without political experience. Over the roaring din of the gala audience inside of the Seattle Sheraton, Councilmember Herbold hollered, “I’ve felt like a kindred soul with Cindy in many ways.”

Councilmember Herbold served with Nick Licata, and Cindy has been the longtime chief of staff for King County Councilmmeber Larry Gossett. Herbold regards further that “[Cindy] has been able to balance the job of working for the government along with activism in a way that I’ve really admired. There’s an energy that it takes to do all that. There’s also a certain ability she has to maneuver in government to be appreciated as well. It’s a difficult balance to strike, and most people in the job of an aide stop doing the side activism.”

Cindy Domingo’s activism extends to many places inside and outside King County. Locally she helps lead the organization LELO, or Legacy of Equality, Leadership and Organizing, which seeks to bring racial and economic justice to workers. Also, Cindy has travelled as an election observer to try and prevent corruption in Philippine elections and to support Philippine solidarity.

Additionally, Cindy has close ties with Cuba as the chair of the U.S. Women & Cuba Collaboration. There she highlights the women’s movement in Cuban society and government. Cindy also acts as a bridge to rebuild direct relations between our two nations which have reverted under the current US government’s administration. She fondly considers Cuba an environment of respite and kinship. And still, there is more to be recounted for Cindy’s work.

King County Councilmember Larry Gossett was present for the awards as well. He and Cindy have been comrades in government work for 24 years, and have known each other personally more years than that. When asked about how he felt hearing Cindy’s accolades brought up during the event he said in humor, “I don’t know why they didn’t talk about me more? Where was I in all that?” As a comedian the councilmember delivers well, but he does provide more serious candor about Cindy. “She’s a very extraordinary woman, and a very experienced and socially conscious leader.”

As it regards Cindy’s globetrotting, Councilmember Gossett also validates her efforts as an alignment to their political region. According to him, the zip code 98118 is identified as one of the most culturally and ethnically diverse in the United States, it is also a zip code he represents. Larry underlines this by stating, “Therefore, [Cindy and I] have to attend and keep an eye on the whole world in order to attend to the people in our district.”

In consideration of her efforts for women abroad Cindy stretches her memory back and says, “Ever since I went to the 1995 United Nations Conference on Women, I dedicated myself to the liberation of women and I think I’ve carried that out since then.” In general, Cindy believes that everything about her life has been about liberating women. Although her interaction in social issues has been broad, an underlying string of seeking freedom for women has always threaded and turned with Cindy through her trials and successes. The gala is just one more stop in an ongoing life of social justice for Cindy Domingo. Her work does represent well some of the apparent core principles for the Women of Courage Gala: justice, representation and inclusion. As the gala honors close Cindy laughs in reflection, “I’m so glad I didn’t become a pharmacist, because I’d be bored as hell!”