When pressed on developing strategies for addressing the community’s public safety concerns in the Chinatown-International District (CID), Seattle Police Department officials have said that police are guided by crime data—and that community concerns don’t usually line up with the data.

According to police data, for example, the biggest rise in crime in the CID comes in the form of car prowls. But this year’s public safety survey conducted by the Seattle Chinatown International District Preservation and Development Authority (SCIDpda) and InterIm CDA points to what members of the community have long suspected: SPD’s data is flawed. Crimes such as drug dealing, guns being fired in the neighborhood, and violent crimes often go unreported because a majority of CID residents don’t call 911.

According to the survey, over 50% of respondents indicated that they witnessed either a non-violent or violent crime in the CID. Of those who reported witnessing non-violent crimes, 72.9% said they did not report it to the police. The most common reason for non-reporting was that they did not expect any follow through by the police (40.4%), followed by thinking that police couldn’t do anything (31.9%).

Of those who reported witnessing violent crimes, 59.5% did not report the crime to police. The top two reasons for not reporting violent crimes were that someone else called (40%) or because they did not expect any follow through by the police (31.9%).

After conducting and analyzing the responses to this year’s survey, SCIDpda and InterIm CDA came up with a list of recommendations to improve safety conditions in the neighborhood. Recommendations included educating community members about reporting crime, developing a culturally responsive protocal for SPD to serve the neighborhood to address the gap in data-driven practices that are not responsive to communities of color, and seeking long-term engagement and financial support for other programs and public spaces in the CID.

In April, SCIDpda and InterIm CDA presented the survey results and their recommendations to Mayor Ed Murray’s Chinatown-International District Public Safety Task Force, comprised of 19 CID business owners and community leaders. The task force in turn presented its recommendations to Murray in June. On July 1, Mayor Murray released his action plan, which included a promise to improve police communication and responsiveness in the CID through new efforts on engaging the community, improving 911 responsiveness and language capabilities, and ensuring that police patrols maintain high visibility. 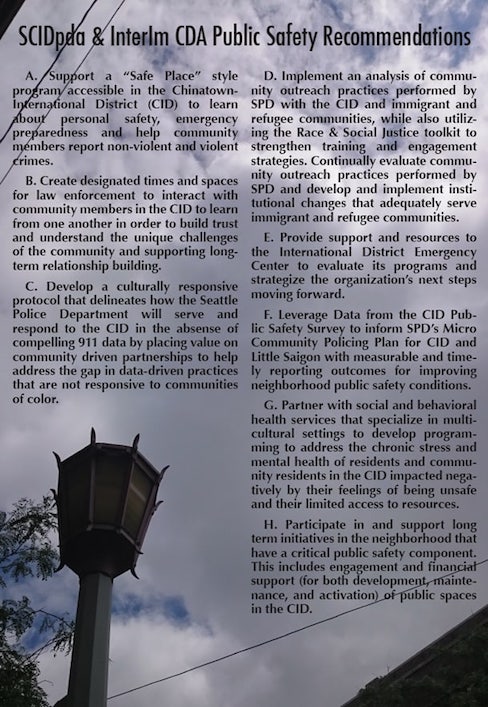 Links between health and neighborhood safety

A new focus of this year’s public safety survey was the impact of safety to one’s stress and anxiety level. CID residents, workers, and visitors provided 334 responses. Out of 320 people who responded to the statement that their stress and anxiety were due to the neighborhood being unsafe, only 30% said they completely disagree.

Valerie Tran, BUILD Health Program manager at InterIm CDA, said that this portion of the survey helped them to understand the links between health and neighborhood safety. For example, some residents are afraid of going outside of their apartments in certain hours of the day, which leads to sedentary behaviors that can cause depression, cardiovascular disease, and obesity.

“We’re not making any causal links that public safety is causing all these issues, we know that it’s one contributor to causing people to be stressed and be sedentary,” Tran said. “If we do want to protect our neighborhood’s health, both physical and mental, we need to look at public safety as one of the things we can address to improve our health.”

In coming up with their recommendations to the mayor and the task force, SCIDpda and InterIm CDA, assisted by criminal justice students from Seattle University, also looked at the CID’s 911 incident response data for 2015. Sokha Danh, formerly of SCIDpda and now the Neighborhood Safety Advocate at the Public Defender Association, said that data collected from the public safety survey gave the 911 incident response report more nuance. There are various reasons why many crimes in the CID go unreported, one of which, Danh said, is the immigrant, refugee, and low income communities’ long historical fear and distrust of police officers. Danh said that the survey could help SPD and the City of Seattle understand the CID better.

Public safety is the city’s responsibility

Donnie Chin, the founder and leader the International District Emergency Center (IDEC), was murdered in the CID in July 2015. For decades, Chin provided medical aid and other forms of support in both emergency and nonemergency situations to address a need in the neighborhood due to a lack of resources provided by the city. Tran said that one of the things SCIDpda and InterIm CDA did while putting together their recommendations was to find ways to relieve IDEC of such a huge responsibility to take care of the neighborhood. That responsibility, they said, really belongs to the city.

“There’s a lot of conversations [about how Chin’s work as a civilian] was enabling police to not do their job. It was enabling a lot of city departments to not step up and actually address this neighborhood the way that it should be,” said Jamie Lee, IDEA Space Program Manager at SCIDpda.

At a June 23 meeting organized by Rep. Sharon Tomiko Santos and IDEC to update the community on Chin’s murder investigation, SPD Chief Kathleen O’Toole said that the majority of 200 new police officers will be stationed in Downtown and the CID to help increase visibility. The public safety survey saw a difference of opinion regarding police presence in the neighborhood among different age groups. According to the survey, only 14.9% of respondents aged 19 to 35 years old at least somewhat agreed that the police keep CID safe. Meanwhile, 28% of respondents aged 55 years old and older said they at least somewhat agree that the police keep the CID safe.

The recommendations made from the public safety survey do not suggest concrete and detailed plans in which SPD should interact with members of the CID community, but Lee said that the point stressed in the list of recommendations is that a better relationship between SPD and the community needs to be improved. Meanwhile, Tran said that the city and SPD need to understand the nuances of the CID community: how it perceives and responds to safety issues.

“If the City is really invested in getting to better understand the nuances of this neighborhood, seeing them invest and placing value in this kind of community-driven data collection is really important,” Tran said.

Unlike previous years, the 2016 public safety survey was conducted online on Survey Monkey and through disseminating paper copies of the survey to residential buildings and businesses in Chinese, Vietnamese, and English. In the future, SCIDpda and InterIm CDA said they hope to refine the survey by reducing the number of questions down from 46 to make it easier for people to respond and finish the survey. The two organizations also hope to start the survey-gathering process sooner next year. Tran said she considered this year’s collaborative effort successful.

“The [mayor’s public safety] task force is over, but our work continues,” Danh said.