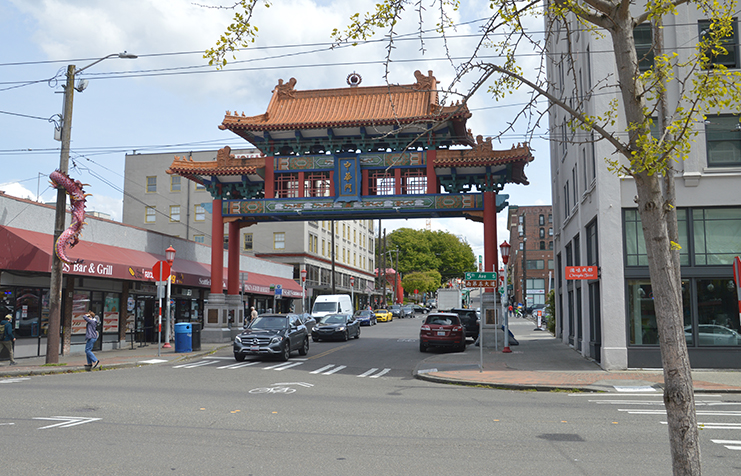 Community organizations in the Chinatown International District wrote letters to Sound Transit concerned about the impacts of the agency’s plans for building a second light rail station in the neighborhood.

In the letters, submitted as part of public comment on Sound Transit’s Draft Environmental Impact Statement (DEIS) for the light rail expansion, the organizations said the DEIS does not adequately assess impacts of the project on the neighborhood. The option to build the station on 5th Avenue was widely considered unacceptable due to business displacements and disruption to the neighborhood.

“We have determined that evaluations by Sound Transit have ultimately failed to fully address and account for the ways in which the expansion will irreversibly change the neighborhood,” reads a newsletter from the Wing Luke Museum.

The Sound Transit Board will pick from five options for where and how to build the new CID station, as part of an expansion approved by voters in 2016.

The options are all either on 4th Avenue or 5th Avenue, built either shallow or deep (like Beacon Hill Station). The fifth option is a diagonal shallow station option under 5th Avenue.

In a letter to Sound Transit, the Chong Wa Benevolent Association urged Sound Transit to select a station location on 4th Avenue to minimize “unwarranted displacement and disruptions to local businesses and especially to the more than 1,200 non-English speaking elderly residents.”

“Many of the local businesses cannot survive years of construction disruption, exacerbated by the pandemic and recent hate crimes against Asian Americans,” the letter said.

In its comments for Sound Transit, Historic South Downtown (HSD) wrote that building the station on 5th Avenue “would break the promises and stated goals” of the Racial Equity Toolkit, which Sound Transit and the City of Seattle have partnered on to plan the project. According to HSD, this choice would have “direct, permanent impacts” on four to six National Register-eligible or listed buildings, as well as indirect and construction impacts on others. “There is an open question as to whether the long-term, direct, and indirect impacts of the 5th Ave. S. options could be mitigated at all,” HSD said.

Many organizations compared the Sound Transit expansion to other public infrastructure projects that disproportionately impacted the CID, from I-5 expansion to construction of the Kingdome and the streetcar construction to zoning changes. “For a neighborhood that exists due to historically racist policies such as redlining and lack of city services, our neighborhood once again faces an uncertain destiny,” reads the Wing Luke Museum newsletter.

According to the Wing, the DEIS “relies on limited information to evaluate historic and archeological resources,” does not include enough specific information about what would be impacted or displaced in the neighborhood, and neglects to consider the Japanese American Remembrance Trail and the Redlining Heritage Trail.

Because the Wing considers the CID neighborhood an extension of its exhibits, it fears the project would harm the visitor experience and contribute to “disintegration of the cultural, historic fabric of our neighborhood, which is already suffering dissolution,” and therefore harm the museum’s sustainability, according to its comments sent to Sound Transit.

International Community Health Services (ICHS), like other organizations, supports a second light rail station in the neighborhood and said it would have some positive impacts, but criticized the DEIS as too cursory in assessing impacts to the neighborhood, making it difficult for stakeholders to make an informed decision about which option to support.

ICHS said it’s likely that more displacement of small business and residents would occur than the DEIS suggests.

ICHS’s letter raised concerns that relocating bus service from 5th Avenue to 7th or 8th – which would last for years – would disrupt the drop-off and pickup of patients and staff and specific ICHS operations including a mammogram semi-trailer that provides breast cancer screenings, food delivery to Legacy House assisted living, ambulance service and more.

ICHS and other organizations criticized Sound Transit for not conducting a noise analysis of the project. ICHS said the DEIS ignores that hundreds of residents live in parts of the CID whose health could be impacted by the noise pollution. ICHS added that a visual assessment of the project’s impacts was missing.

COVID-19 and anti-Asian racism have both “tested the neighborhood’s resiliency,” ICHS noted, and “were not fully considered when the DEIS was drafted.” These issues are especially impactful for seniors, some of whom are afraid to venture out for fear of attacks.

InterIm Community Development Association concurred that Sound Transit should remember anti-Asian hate when designing the station. “[T]he physical environment of the tunnel or station must be designed with an eye toward preventing these attacks,” the organization wrote.

InterIm also called on Sound Transit to look for “better alternatives with fewer harmful impacts on the community” in its letter, raising concern about long term, indirect displacement caused by either a 4th or 5th Avenue station.

While the DEIS acknowledges direct displacement impacts, it does not account for indirect displacement caused by rising land values and rents associated with the project, InterIm wrote, which could displace culturally-important businesses, community services and organizations well after construction is over.

InterIm and others said the DEIS lacked a safety plan for pedestrians using sidewalks near construction zones. InterIm said that given the CID’s importance for the Asian diaspora in the region, a better plan is needed to address how construction might make it harder for people to reach the CID by bus for work or cultural events. InterIm raised concern that building on 4th Avenue would eliminate over 200 parking spaces, disrupting access for people who need to drive to the neighborhood for grocery shopping, medical care or social services.

The Seattle Chinatown International District Preservation and Development Authority (SCIDpda) and HSD wrote that a shallow station on 4th Avenue would be the least impactful of all options.

Construction would close key streets in the neighborhood, and “create noise, dust, truck traffic, and visual impacts that would hamper or prevent community gatherings and activity in Hing Hay Park and other outdoor spaces, and affect quality of life for residents of Uwajimaya Village, Fujisada Condominium, Publix Building, and Bush Hotel—many of whom are seniors or living with disabilities,” according to SCIDpda.

SCIDpda called on Sound Transit to conduct advanced study of how to minimize construction impacts of the shallow station options, and share the results with the community before the final EIS.

The 5th Avenue options have the most potential for new Transit-Oriented Development (TOD), according to the DEIS. Any such development should prioritize community ownership, according to SCIDpda and InterIm, to avoid worsening the neighborhood’s risk of displacement and gentrification. “These measures must be in the form of explicit legal commitments; the promise of a TOD opportunity alone is not sufficient mitigation or incentive to support a Fifth Avenue alignment,” according to SCIDpda.

SCIDpda, FLS and the CIDBIA wrote that closing 4th Avenue to construct a station there, and diverting north-south traffic through the neighborhood, would increase congestion and could result in environmental health impacts like pedestrian injuries, car crashes, exposure to exhaust and more.

SCIDpda and others criticized the deep station options as inadequate for the large numbers of people who use transit for stadium events. Elevators frequently break down, SCIDpda wrote, and won’t be safe to use during another pandemic.

The public comment period ended April 28. The comments sent to Sound Transit will help inform a final Environmental Impact Statement, scheduled for publication in 2023. Only then will the Sound Transit Board select one of five final routes and station locations. Design and construction are scheduled to start in 2026.

The Chong Wa Benevolent Association’s letter to Sound Transit requested that public comment be extended to May 28 to provide more time for limited English speakers to comment on the options and their impact.

Activist group the CID Coalition wrote to Sound Transit asking for a 90-day extension of the public comment period for the DEIS. The group wants to use the extra time to conduct outreach with community members who may not be aware of the project and its impacts, including limited English speakers and people experiencing homelessness. The CID Coalition letter was shared by organizations including Puget Sound Sage, API Coalition Advocating Together for Health (APICAT), the Seattle chapter of the Japanese American Citizens League, OCA Asian Pacific Advocates of Greater Seattle, Egg Rolls/ChuMinh Mutual Aid, and several businesses.

“[W]e we are adamant that all voices and perspectives be heard on a project that proposes to cut through the heart of our neighborhood,” the letter reads.