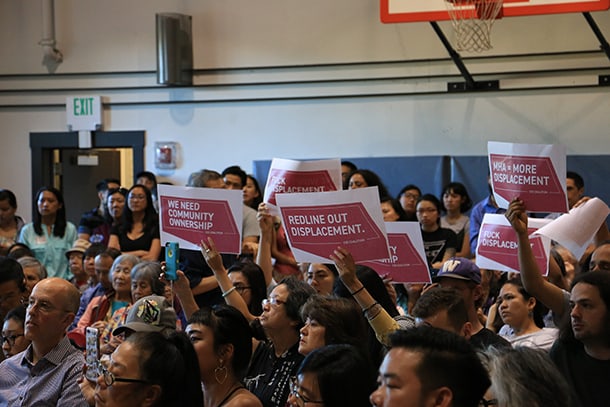 For more than 20 minutes, there was silence as City officials explained that zoning in parts of the Chinatown International District (CID) needed to change, to allow developers to build higher. “We are asking for this change because it would allow us to require new buildings to build affordable housing,” said City Councilmember Rob Johnson.

He was referring to the Mandatory Housing Affordability (MHA), or “Grand Bargain,” one of the recommendations in Mayor Ed Murray’s signature Housing Affordability and Livability Agenda (HALA). In return for a change of zoning (an “upzone”), the City can force developers to either set aside seven percent of their housing as “affordable,” or else pay into a fund managed by the City. The City can then use this fund to support affordable, subsidized housing throughout the City.

On Monday, July 31, the Council approved the upzone for the CID neighborhood in a 8-0 vote.

But on July 19, around 250 people packed the Nisei Veteran’s Committee Memorial Hall on South King Street in Little Saigon neighborhood mostly to oppose the upzone and voice their fears about displacement and gentrification in the neighborhood. Over 30 limited English speaking elders wore headsets as the forum was translated.

The room was quiet as City officials explained why they believed the upzone was necessary. Councilmember Johnson emphasized—repeating three times—that the “historic core” of the CID (roughly between 5th Avenue and I-5 going West to East, and between South Jackson Street and South Weller Street) would be unaffected by the upzone.

It was only after Tom Im of InterIm Community Development Association (InterIm CDA) spoke that the room unleashed a wave of cheers and applause. Im said the MHA zoning requirements do not go far enough in helping prevent displacement in the neighborhood.

“Ultimately it’s about saving the grandmas and grandpas that live here from being uprooted from their homes, or a family business that has been in the ID for generations from being told to leave because the building housing their business is being sold,” Im said.

It was the first of many times the room cheered in response to someone voicing concerns about displacement, affordability, and the future of the CID. In a city where rents have risen to the fifth most expensive in the country, many in the CID expressed their worries about displacement.

Five City Councilmembers attended: Bruce Harrell, Lisa Herbold, Lorena González, Rob Johnson and Mike O’Brien. While Harrell represents Council District 2, which includes the CID, the remaining four Council members make up the Planning, Land Use, and Zoning Committee, Chaired by Johnson. The event took the form of a public committee meeting, legally required as such because a majority of the Council attended.

After presentations from the City and InterIm CDA, public comments lasted for over two hours. Most people spoke against the MHA, and criticized the City for lacking transparency and not listening to the neighborhood when making decisions that affect them.

Leslie Morishita, Real Estate Development Director at InterIm, explained the importance of the CID as a spiritual home for people around the region, as well as a home for immigrants and refugees and those with limited English.

“For residents, especially long time, elderly residents, being pushed out of the ID means the devastating loss of social and cultural ties that support day to day living and the loss of a sense of self and agency in the world,” Morishita said.

Several people brought up the history of displacement in the CID, from the forcible expulsion of the City’s Chinese population in 1886 to the incarceration of Japanese Americans during World War II.

Other speakers criticized the upzone as a giveaway for developers.

“The very last thing the CID needs is tall commercial buildings casting literal shadows across the people who live here,” said Alice Marabe, a lifelong Seattleite with family ties to the neighborhood. “The city needs to know what values it’s thinking about when it talks about development. That’s a very vague word. Development for whose benefit and whose interests?”

Others brought up the effects of displacement and gentrification around the city. Jill Mangaliman, executive director of environmental justice organization Got Green, talked about being displaced to Burien after living in Seattle their whole life. “We see what unchecked development looks like in Rainier Valley. It’s so gentrified that our own community members can’t even live in our city.”

Devin Cabanilla, a business consultant and Filipino American historian who works in the neighborhood, said he’s concerned about the future of the neighborhood. Though his family has lived here since 1910, it’s too expensive to raise his three children there.

“With the median income in the area extremely high, it’s impossible for me to be part of a new foundation of Chinatown,” Cabanilla said. “We may be at the end of our generations here.”

One or two people spoke in favor of the upzone, with one man suggesting that the MHA would be the right policy to bring more badly-needed housing to the neighborhood.

But most speakers at the forum criticized multiple aspects of the MHA. These included the requirement that only seven percent of housing be designated as “affordable,” rather than a higher percentage. The meaning of “affordable” itself was criticized as being misleading. The Mayor’s HALA recommendations are aimed at people who earn between 30 percent and 80 percent of the Area Median Income (AMI). In 2017, 80 percent AMI for a household of one is an annual income of over $50,000 dollars per year. For a family of four, the AMI is nearly $77,000 per year.

Meanwhile, in a ranking of the median household incomes of some 45 Seattle neighborhoods from data website Statistical Atlas (drawn from slightly outdated 2010 census data, it should be noted), the CID comes dead last in median household income, at around $25,000 dollars per year. For a family of four, this is just above the federal poverty line of $24,600 per year.

People also noted that if developers choose to pay into an affordable housing fund, there’s no guarantee the housing generated by the fund would be built in the neighborhood. And overall, only 150 affordable units are expected in the CID over the next ten years.

In an interview before the event, Frank Irigon, who has worked as an activist in the CID and the API community for decades, did not mince words when discussing the threats to the preservation of the neighborhood.

“My own opinion is, they’re colonizing the International District, and the city is telling us to welcome the builders and developers with open arms,” Irigon said. “And that’s bullshit.”

Before public comment, representatives from the City and InterIm CDA discussed some solutions to the many issues brought up by neighborhood residents.

Near the beginning of the event, Gary Johnson of the City Office of Planning and Community Development explained that the City is about to launch a new planning process in response to concerns from the neighborhood has conveyed over the past year. The City will look at whether it can give City-owned land to the community for affordable housing, as well as allowing the community greater input in new development. A City committee will work to make sure large municipal projects are coordinated to avoid impacting residents, while another group will look at ways to improve parks, cityscapes and the pedestrian environment with the help of an advisory committee composed of neighborhood advocates, including Pradeepta Upadhyay and Maiko Winkler-Chin of InterIm CDA.

Im of InterIm ran through a list of proposals from the organization: Community control of more land to build affordable space on, an eviction prevention program and neighborhood tenant organizer, requirements that landlords to provide more notice for businesses to negotiate new leases. Im said the City should support a job training program and Section 8 housing vouchers for those facing displacement. It should also fund a community engagement position so people in the neighborhood can be informed about City projects, Im said.

Midway into the public comments, a restaurant owner and board member of Friends of Little Saigon spoke to address something she felt was missing from the discussion so far: the loss of hope.

She explained that before the forum, she and others had gone door to door to businesses in the neighborhood asking people to attend. Most didn’t seem to care. They said they’d lost business starting five years ago when the streetcar was constructed in the neighborhood, and blamed a rise in homelessness on hurting business as well.

“Community members don’t want to invest in their own community anymore,” she said. “What are we going to do to instill hope in them again?”

Slideshow photos by Cathy You: