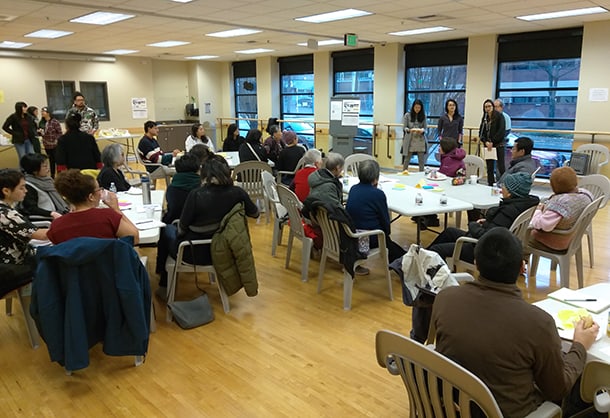 The Chinatown-International District (CID) Coalition (also known as Humbows Not Hotels) hosted a community meeting with Seattle City Councilmember Kirsten Harris-Talley on November 19. Forty community members came to the meeting to discuss their concerns about development-driven displacement in the CID.

Last year, CID Coalition co-founder Cynthia Brothers wrote a piece in the Seattle Globalist about the rapid pace of development in the neighborhood and how it might lead to displacement.

For Brothers, this is exemplified by a proposed 14-story hotel and condo mixed use facility planned at 8th Ave. and S. Lane St.

Members of the CID Coalition and others are concerned that these developments would erase much of the neighborhood’s cultural character and affordability.

The CID is one of the poorest neighborhoods in the city. According to the 2010 U.S. Census, residents of the neighborhood make $45,000 less per year than Seattle’s median household income of $80,000. Affordability is an especially pressing issue for many limited-income elderly residents and low-income workers.

This has been viewed as an existential threat by many as the City Council approved an upzone for the CID this summer. An upzone is a zoning change which allows developers to build taller. In exchange, the City can force the developers to either set aside seven percent of their housing as “affordable,” or else pay into an affordable housing fund managed by the City.

When the upzone was slated for the CID neighborhood, many members of the CID Coalition members and residents of the neighborhood either testified against it, saying it wouldn’t go far enough in guaranteeing affordability in the neighborhood.

“[My grandmother] likes to walk around and play mahjong in the neighborhood,” said Tiffany Chan, an activist with the CID Coalition. Many of the CID Coalition members are young people with a strong cultural connection to the community, or who have elderly relatives who live in the community.

Matt Chung, one of the older activists, said: “When I was a kid, Chinatown was where we’d always go…this is still the most important part of the city to me….Without Chinatown we have no say [in Seattle].”

“I’ve seen with all of the rapid changes and conversations that have been happening around the city…[Seattle] having a history of segregation and a community that has had to do it for themselves…impacts immigrant and refugee folks for whom English may not be a primary language, and the systems that we’ve had have disproportionately put them outside of the conversation.”

The meeting began with some introductory information about nine other projects in the neighborhood, such as Koda Condos (which will build more than 200 market-rate condos), before the room broke up into various groups. The tables included youth and elders, neighborhood residents and advocates. The organizers posed simple questions about their vision for what the CID neighborhood could look like in the future.

Community members returned from the breakout groups with an emphasis on protecting and expanding affordable housing, addressing labor-inequality, anti-Blackness and translation services. The need for translation often poses a major obstacle to many members of this community, according to T.W. Wang, the Cantonese translator at the front of the room. Wang shared his story of discrimination and exclusion when he rented a room in the Bush Asia hotel apartments. According to Wang, hot water was unavailable at the hotel for a long time. He struggled to exercise his rights, because interpreting the law required proficiency in English.

The CID Coalition ended the meeting by addressing the group’s needs with a larger vision of community ownership. Brothers of the Coalition and of the online art and anti-displacement blog Vanishing Seattle, described this potential solution as community ownership. “Getting land out of the speculative market, and getting that land and resources back into the community as a way for the community to set the agenda…and be given resources and support by the city,” she said.

The CID Coaliton’s next community meeting is January 25th and the location is to be determined.  Councilmember Kirsten Harris-Talley is also hosting a community forum on Saturday, November 25th at 6:00pm- 10:00pm at the Southside Commons at 3518 S Edmunds St, Seattle, WA 98118