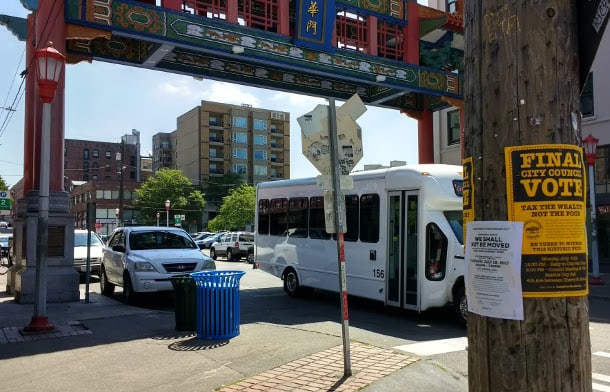 This week, community organizations and businesses in the Chinatown International District (CID) will host a town-hall style forum to communicate their fears of displacement and gentrification. All nine City Council members have been invited to attend.

InterIm Community Development Association (InterIm CDA), along with the anti-displacement CID Coalition and other community organizations, are inviting anyone to attend who is concerned about “the displacement of the community, including its residents, businesses, social services, nonprofits, and culture,” according to a statement from InterIm CDA.

The Town Hall coincides with the Council voting this month on a measure that would affect what kind of development will happen in the neighborhood: the Mandatory Housing Affordability (MHA). The MHA measure would change the zoning of parts of the CID — with the exception of the National Historic District at the center of the neighborhood — to allow developers to build taller buildings. In exchange, these developers must set aside a percentage of their housing as “affordable,” or else pay into an affordable housing fund that the city will use to build its own affordable housing. The MHA is part of Mayor Ed Murray’s Housing Affordability and Livability Agenda (HALA), and the trade-of is the so-called “Grand Bargain” between developers and the City.

The possibility of new development in the CID, brought on by the MHA, is driving fears of displacement and gentrification. The CID is one of the poorest neighborhoods in the city, and historically home to immigrants and refugees, including many with limited English. Some fear that, in a city where rents have recently surged to become the fifth most expensive in the country, the MHA rezoning will lead to housing becoming less affordable for CID residents.

In a statement, Interim-CDA notes that the rezone also coincides with worries about speculative real estate purchases — people outside Seattle buying up property as an investment without immediately using it.

According to Frank Irigon, who has worked as activist in the CID and the API community for decades, one of the goals of the event is to help educate people about the housing issues facing the neighborhood, including the Housing Affordability and Livability Agenda (HALA).

Irigon sees HALA as a giveaway for developers, and he fears it will not do enough to ensure that low-income residents of the CID can continue to afford living there. The MHA is designed to build housing for the low-income — defined as those making less than 60 percent of the area median income in Seattle. A single person making around $40,000 dollars a year or less would qualify as low-income, as would a family of four making around $58,000 dollars per year.

Irigon said that for the CID, displacement is a bigger concern than affordability, because most CID residents make far less than the area median income. In a ranking of the median household incomes of some 45 Seattle neighborhoods from data website Statistical Atlas (drawn from slightly outdated 2010 census data, it should be noted), the CID comes dead last in median household income, at around $25,000 dollars per year. For a family of four, this is just above the federal poverty line of $24,600 dollars. Seattle’s median income in 2017 is around $80,000 dollars per year.

Irigon fears that the same gentrification and displacement that struck the historically Black Central District, and the Yesler Terrace housing project, will ruin the CID.

“They’re getting rid of all these ethnic enclaves,” Irigon said. “They’ve neglected the International District, and then all of a sudden they say, ‘Hey let’s beautify this place.’ They didn’t beautify it before when our people were living there.”

Organizers of the forum are also concerned with cultural displacement, Irigon said.

“Many of us consider Chinatown, even though we don’t live there, as our cultural and historical home. And with these high-rises and hotels and these other businesses that aren’t culturally appropriate for that neighborhood, for our people, that’s what cultural displacement is all about.”

Irigon and other activists, including the late Bob Santos, fought to preserve and protect the CID after seeing gentrification, displacement and other pressures destroy historic Asian enclaves across the West Coast.

Irigon points out that the threat of displacement in the neighborhood is nothing new. He remembers when, in 1970, a fire at the Ozark Hotel in Westlake led to stricter building codes, which forced many building owners in the CID to close down their residential units, which devastated the housing stock in the neighborhood.

“What they couldn’t do 40-something years ago with the Ozark Fire Ordinance, they tried to do now with the Grand Bargain,” Irigon said.

The agenda for the event is as follows: