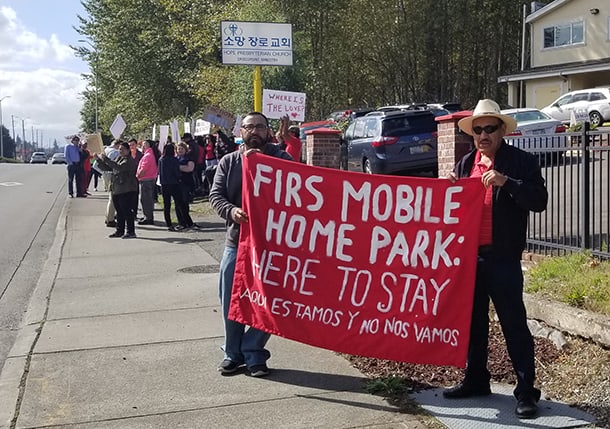 “Practice what you preach!” and “We want to stay in our homes!” chanted marchers along Pacific Highway outside of Hope Presbyterian Church in Des Moines.

Members of the Chinatown-International District (CID) Coalition joined the Firs Homeowners Association (HOA) in a public demonstration outside the church, to support a low-income, mostly Hispanic immigrant community that faces eviction from the mobile home park. They were joined by the Tenants Union of Washington State and the Association of Manufactured Home Owners.

A fight to prevent a community from being evicted by landlord Jong-Soo Park.

Based in SeaTac, the Firs Mobile Home Park comprises of 64 families — the Seattle Times reported in January, 170 people, including 90 children. In October 2016, landlord Jong Soo Park gave a closure notice to residents. Although the families own their homes, they pay $500 in rent for the land beneath their structures.

Park offered the families $2,000 each to offset relocation costs, an amount that activists say is insufficient to cover the costs of relocating the mobile structures. Washington state law stipulates that aged mobile structures like the ones in the Firs mobile home park cannot be moved. Otherwise, families will be charged with disposing and destroying their homes. Adding to the difficulty, even if families can gather the resources to move their homes, the number of mobile unit pads within King County is 9,000 and diminishing.

Faced with eviction, residents organized and formed the Firs HOA. The HOA accuses Park of using intimidation tactics against residents, including harassment; threatening late-night phone calls; turning off the water to the park; and boarding a unit with a family inside. The Firs HOA and allies say they appealed to SeaTac City Council but were denied the right to public comment and rebuffed from public meeting. At the moment, both Park and the Firs HOA are entangled in legal disputes over the right to eviction.

At press time, Park could not be reached for comment for this story.

Park’s goal in evicting the Firs residents is to develop a luxury hotel. The Firs Mobile Home Park is an attractive site for a developer, with a two-block proximity to the Angle Lake Light Rail State. Working with Park is Hotel Concepts, a luxury hotel developer, the same developer behind a proposed 16-story luxury mixed-use hotel and condominium project on 8th and Lane St. in Seattle’s Chinatown-ID.

“It was important to the CID Coalition to show up for the Firs community today,” said Cynthia Brothers, founder of the CID Coalition. “Not only because we are both facing issues of displacement by the same hotel developer, but also to take a stand against gentrification and eviction that are pushing families and elders out of their homes and support networks.”

Earlier this year, Washington State legislators allocated $2.5 million in the state budget to help the community buy the Firs Mobile Home Park. This falls below the $10.7 million dollar market value for the park, the Seattle Times reported. Firs residents say Park refuses to negotiate with them, or provide maintenance to the mobile park, since he announced the eviction.

“What gives us the most strength is that we do not want to join the growing number of folks without homes,” Zamora said. For two year and counting, the Firs HOA continues struggle to save their homes in a county that is losing mobile home units.

“We understand that [Park] is an active member of the church and there is no alignment between what he preaches and what he practices in what he is doing to us,” Zamora said. “I do not think it is humane for him to evict family, children, elders, and peoples with disabilities; that’s our fight.”

Towards the end of the demonstration, the New Hope Presbyterian congregation began leaving. Many of them appeared confused to see the demonstrators chanting and passing out flyers.

By the time a majority of parishioners left, Park could be seen quickly leaving the parking lot. Some Firs residents stopped him and asked if he would sit down and talk. Park promised tenants he would talk, but didn’t detail any specific plans before driving away.