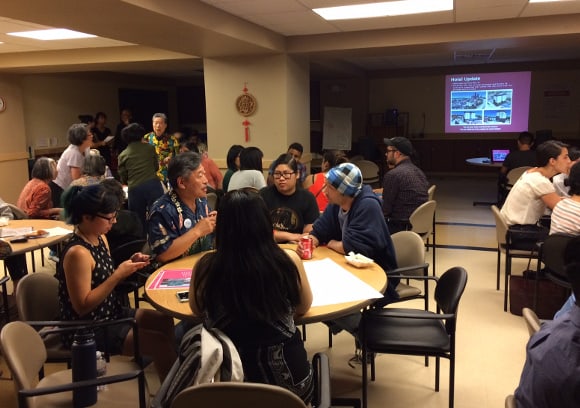 Discussions about a possible new corporate hotel, affordable housing, and community-generated goals in the Chinatown International District (CID) swirled at a July 9 meeting. The CID Coalition, also known as Humbows Not Hotels, brought together residents and friends of the district to share updates on local property development plans and gather feedback from the community.

Frank Irigon, a longtime Asian American civil rights advocate also known as Uncle Frank, briefly spoke about his work on behalf of the International District community as a student at the University of Washington. He described efforts to protest the construction of the Kingdome as a way of fighting against displacement, similar to goals shared by the CID Coalition. He praised the group of volunteer activists for their efforts to work both with and for the community.

Members of the CID Coalition took turns to provide updates and moderate group discussion about issues impacting the district. A significant portion focused on updates from an International Special Review District (ISRD) board meeting in May, which included discussion regarding a proposal to build a new Marriott hotel on 8th Ave S and S Lane St. At that meeting, many public commenters shared their dismay at the hotel’s location and design. Some added that it failed to represent the culture of the district, and the lot should instead be used for community-oriented economic development.

Christina Nguyen, a volunteer with the coalition, shared some of that feedback with the group at Sunday’s meeting.

“This is basically a slap in the face for our community,” Nguyen said, after sharing notes from the meeting. “We are more than colors in a window design.”

She continued to say that the overall concept for the hotel is “completely out of scope” with the people who live in the Chinatown International District.

The coalition also shared concerns about the proposed 14-story tall building’s shadow across neighboring structures, increased foot traffic in a sensitive area, and an overall sense that the project represents gentrification in the neighborhood. The hotel would replace a block that includes a Tai Kwon Do School and a former hookah lounge, and operate in close proximity to Legacy House, the only assisted living facility for Asian elders in Seattle. Bids for the lot had exceeded the capacity for nonprofits in the area, who had previously hoped to purchase and use the property to expand medical and social services for the community.

However, plans for the hotel are still in their early stages. The ISRD board must approve the developer’s permit before any construction may begin, and members of the CID Coalition have been lobbying the committee to deny that permit.

The coalition also shared their concerns around Seattle’s Mandatory Housing Affordability (MHA) requirements. If the city council approves an upzone in the district, the MHA laws would go into effect, and require developers to build affordable housing or pay a fee in lieu of those units. Current proposals for the Chinatown International District would mandate builders devote at least 7% of their buildings to affordable housing units or pay the fee. But some members of the coalition say the legislation lacks clear avenues for accountability, while failing to provide enough affordable housing units quickly enough to meet current needs.

Tam Nguyen, a business owner and advocate with Friends of Little Saigon, says he doesn’t necessarily care about the percentage. Instead, he says he’d rather support any legislation that clearly accomplishes three goals. Those include commercial affordability for small business owners in the area, bringing and retaining Asian and Pacific Islanders within the district, and higher levels of cultural competency among staff brought in from outside the neighborhood.

Volunteers also asked those who attended the meeting to share their concerns or ideas for the district’s future. Coalition members asked what should be done about affordable housing, affordable commercial space, community owned land, and stabilization assistance. Some groups recommended a community- based stabilization or anti-displacement fund, created and used by the API community and businesses.

Many groups also said they would like to see increased cultural opportunities. A table full of Cantonese speakers said cultural isolation for the aging community is difficult, especially when many young people don’t speak the language. Other commenters said they would like something like a community-developed landmark project, or a regularly scheduled night market.

The CID Coalition plans to participate in a meeting with city council members on July 18, to continue addressing displacement concerns. Interpreters will be present during the meeting, from 5 to 7:30 p.m. at Memorial Hall on South King Street. More information can be found here.