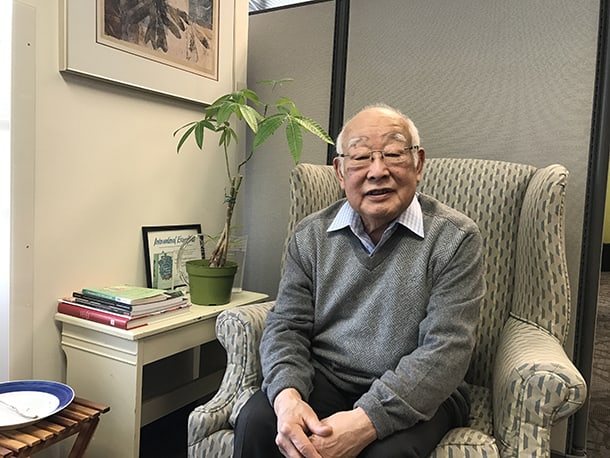 Tomio Moriguchi, longtime chairman of the Uwajimaya grocery chain and International District business leader, stepped to the podium at the Fisher Pavilion at Seattle Center on March 31 with his sister Tomoko Matsuno and daughter Denise to accept an award from the Japanese Cultural & Community Center of Washington (JCCCW).

The award, acknowledging the contributions of the Moriguchi family in strengthening Japanese culture and heritage, provided a fitting capstone to the career of the Tomio Moriguchi, the family member most closely identified with the store during its remarkable growth from a small business that sold fishcakes to Japanese laborers from the back of a truck in 1928 into a booming regional business with stores in the International District, Bellevue, Renton, and Beaverton. The company is planning to open a new store in South Lake Union this year.

Tomio retired last year following five decades at the helm of the company, both as CEO and chairman of the board. Tomio and Tomoko Matsuno, who had been serving as CEO since 2007, are now both retired, making way for Tomio’s daughter Denise to take over as CEO.

Phyllis Campbell, a senior executive at JP Morgan Chase and a longtime admirer of Tomio, said: “He has always had a generosity of spirit towards people first and community a close second. He has quietly mentored and championed so many individuals, especially those in the Asian American community. He is also a quiet philanthropist, giving back to causes and worthwhile endeavors to benefit the greater good.”

Karen Yoshitomi, JCCCW executive director, noted that Tomio helped organize “leadership breakfasts” for young professionals in the late 1980s and early 1990s under the auspices of the Japanese American Citizens League.” These breakfasts weren’t just an opportunity for networking and self-improvement for personal advancement, they were also about strengthening the local Asian community through civic engagement,” she said.

Jeffrey Hattori, CEO of Keiro Northwest, called Moriguchi “a profound role model and mentor” since he first met him in the late 1970s: “The following comes to mind when I think of Tomio: community and business visionary, servant leader, devoted to family, supports the broader good—all while being extremely humble and smart!”

Moriguchi, born in April, 1936 in Tacoma, celebrated his 80th birthday last year. “Last year, we concluded our CEO search,” Tomio said. “So I thought that it was a good time for me to retire and for the third generation to take over. On December 31, 2016, I stepped down as chairman of the board.”

Although Tomio is now retired from management of the company, he noted that he will continue to work on developing his personal real estate holdings. The properties includes a half-block parcel on South Jackson Street, which could emerge as a 400,000 square foot housing and commercial structure. “We’re at least two or three years away from breaking ground on this,” he said.

Moriguchi noted that he and his partners sold another quarter-block parcel next to Hirabayashi Place to a Taiwan development group.

Most recently, Tomio helped spearhead the remodel of the historic Publix Hotel in the International District, which closed in 2003 and reopened in 2016 as a new six-story mixed use building, yielding 125 apartments and 12,000 square feet of commercial space.

“This development work takes a lot longer than what I used to do,” Moriguchi said. “I suppose the only thing that I’ve retired is my paycheck. But seriously, I don’t want it any other way. I’m not the kind of person who ever enjoyed just going to Hawai‘i and kicking back on the beach.”

He counts his involvement in formation of the nursing home, which opened in 1976, and the ID agencies that continue to thrive today among his proudest accomplishments. “I was always disappointed that we couldn’t get more business people involved in the ID groups,” he said. “The problem is that they don’t sustain their interest for very long.” He pointed to Barry Mar and Ray Chinn as two property owners who successfully took advantage of city programs to redevelop their historic hotels.

Moriguchi recalled that the Model Cities Program, a source of federal dollars to address urban problems in Seattle in the early 1970s, helped support development of Inter-Im. But he added most of the dollars that were allocated through City program director Walt Hundley were invested outside of the ID. “I tried to attend to go to these meetings, but what they were doing had little to do with what we were doing in the ID,” he said. “They sent us $19,000 when they had millions.”

Moriguchi pointed out that SCIDpda, a community development corporation chartered by the City in 1975, was an outgrowth of the advocacy efforts of Inter-Im. Tomio served on the original board of SCIDpda, which restored the Bush Hotel and built International District Village Square among its many neighborhood projects. “It was fashionable back then to create public organizations like this,” he said. “It’s nice to see that our PDA has survived.”

As a businessman, Moriguchi said, his priority was helping sustain and promote small businesses in the neighborhood. He was involved in establishing IDEA in the mid-1970s and served as its president. IDEA launched the annual summer festival, which continues to this day as one of the biggest draws in the ID. It has been rebranded as “Dragon Fest” and takes place this year on July 15 and 16. IDEA also sponsored an annual Christmas party, which provided an opportunity for business owners and community leaders to get to know one another and for candidates for Mayor and the City Council to learn about neighborhood issues.

Moriguchi said he still serves on several non-profit boards, including a Japanese overseas newspaper association. This dovetails nicely with his continuing role as president of the North American Post, founded in 1902 as the oldest Japanese language newspaper in the Pacific Northwest.

Moriguchi continues to travel overseas for business and to meet old friends. He said a friend in Cebu used to be a frequent travel companion. “But he’s in a wheelchair now,” Tomio said. “He and my other friend in Manila, we used to go and have a glass of beer. We used to ask, ‘What bar should we go?’ Now it’s, ‘What Starbucks should we go to?’ You realize you’re lucky to have your health.

“Some of the kids I went to Garfield with—five of them are now on dialysis, including my brother. It restricts where you go and your quality of life. At the end of the day, you realize that money isn’t everything.”

Four years ago, Moriguchi moved to the Fujisada Condominiums in the International District, where he lives with his wife Jenny. How does he feel about living in the ID? “It’s okay,” he said, “except I wish we had double-paned windows to keep out the noise. There’s a late crowd at the Oasis Tea Zone across the street. They can get pretty noisy when they leave.”

Does Tomio provide regular business advice to his daughter Denise? “We talk,” he said. “We’ve been very close for a long time. After my first wife Lovett passed away, she and I were the only ones in the house. She knows I’m there if she has to call me. But she’s very intelligent. That’s all the more reason that you don’t want to say anything unless she brings it up.”

Denise Moriguchi said she has fond memories of accompanying her father to the office when she was little, “sitting among his piles of paper” and watching him work.

“He has always been my biggest role model—both personally and professionally so I am not surprised that I am following in his footsteps,” Denise said. “He has taught me to be patient, listen to what others have to say, think of the big picture, and put employees and the community before the bottom line.”