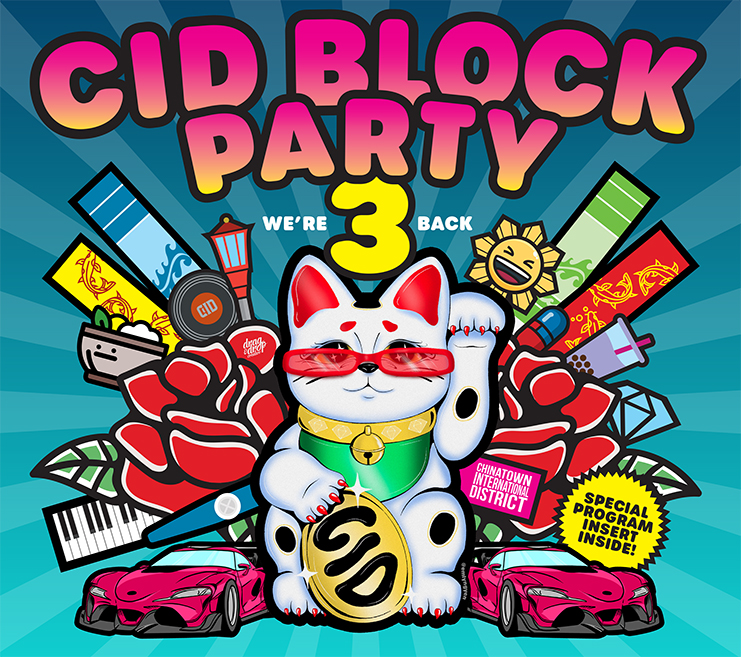 The I-5 underpass will be unrecognizable on August 20, 2022 as the CID Block Party returns for a third time. Located under the King St. Colonnades, on King Street between 8th and 10th avenues, the family-friendly Block Party will feature a lineup of Asian-American of artists, DJ’s, food trucks, a beer garden, vendors, and community sponsors and partners.

This year, the CID Block Party joined forces with community partners for a district-wide effort to celebrate a day in the neighborhood, so that residents and visitors can spend the whole day supporting local businesses and enjoying local culture in the heart of the CID. Other free neighborhood events happening on August 20 will include: A Friends of Little Saigon Celebrate Little Saigon event, HAI! Japantown, Seattle Asian American Film Festival Summer movie screening, and Chinatown-International District Business Improvement Association’s Food Walk.

The International Examiner asked Tuyen Than, organizer of the Block Party and co-founder at independent design studio Drag & Drop Creative, to share more about the intentions behind the celebration, and what people can expect when they attend this year.

International Examiner: The first CID Block Party was held in 2016, and the second in 2019. This will be the third. For people who don’t know, what is the CID Block Party all about?

Tuyen Than: CID Block Party was established as a platform, the event showcases and highlights the talents, diversity and richness of the Asian American community at King St Colonnades, the intersection of the neighborhoods. We featured artists such as Awkwafina, Shawn Wasabi, Kero One, Prometheus Brown (Blue Scholars, Beatrock Music, The Bar), Bambu (Beatrock, The Bar,), and Chong the Nomad.

Fresh out of college in 2016, CID Block Party was started by me and a group of friends, we called ourselves API Food Fight Club, who wanted to connect with our neighborhood. We were already all involved in the community in some way either through the International Examiner, Wing Luke Asian American Experience Museum, CID resident, small biz owner, karaoke host at Bush Garden, or community organizing. We did different things like a cash mob centered around discussions around public safety, Thank You Donnie Chin BBQ, and the CID Block Party.

In 2016, we had about 400 attendees. In 2019, attendance grew to almost 4,000. So, this event is about community. A community coming together with an idea… working together to put on a grassroots event fueled by volunteerism, creativity, and resilience.

IE: What was your inspiration in bringing back the Block Party again this year?

TT: Since the last event, so much has happened. We lost people to covid, addiction, overdose, guns, and suicide. Now more than ever, we need to come together to remind ourselves of the community that exists. We don’t know what’s going to happen tomorrow, but we have to remember that we’re strong, we’re resilient, and we’re here for each other. And also, if this pandemic has taught me anything, it’s that we have to be creative. Creativity, art, music, and dance is the heart and soul of this neighborhood.

IE: What kinds of performances can people expect from the Block Party, and how did you go about planning the performance programming?

TT: This year, we are proud to present a lineup of women/nonbinary DJs, including Sharadawn, thycups, DJ Accia, and novel natura from Seattle, DJ IVY from the Bay Area, and CHYL from LA.

I wanted to be intentional about the lineup because I believe that it is important to showcase and uplift the talents of women in the music industry. I believe that this lineup represents a wide range of styles and genres, and I hope that everyone who comes out to the show will enjoy the music and dance.

IE: This year, the Block Party is intentionally happening on the same day as many other events in the neighborhood, and the events are staggered so people can attend multiple events. How did you decide to organize it this way?

TT: I-5 freeway has long divided the city, physically and psychologically. The reason why we hosted our event at the underpass is for people to reimagine what street spaces could look like. Hosting this event at the InterImCDA Parking Lot / King St Colonnades, the intersection of the neighborhoods, also represents bringing our neighborhoods together.

In the spirit of community and collaboration, it only made sense that we reach out to other nonprofits that are also doing the same work, because we are much stronger when we work together towards achieving the same goals, so come spend the day with us in the neighborhood! There’s something for everyone anywhere. Eat, work, play, stay.

Another advantage of holding our event in the underpass is that the noise level will be contained. Also, we won’t be taking any street parking away from businesses or residents that rely on parking in front.

IE: For people who want to attend or volunteer at this year’s Block Party, what should they know, and where should they go online or on social media?

TT: We encourage anyone who wants to be a part of the event either as a vendor, volunteer, or artist to hit us up on our website cidblockparty.com, instagram @cidblockparty, or via email [email protected].

TT: I’d like to thank Jamie Lee, Tom Im, Ryan Catabay, Jintana Lityouvong, Sonny Nguyen, Allen Huang, Alan Alabastro, Khoa Pham, and International Examiner for being there with me at the very beginning. With no money, no experience, and no idea what we were doing, we were able to come together and create something special. Thank you for being a part of that.

It just takes one opportunity and a few people to believe for this event to be born. We are excited to say that we will be doing this event every year.