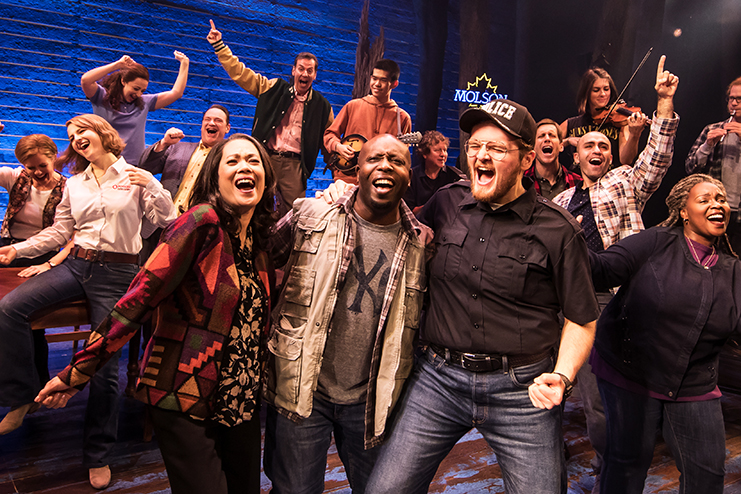 In 2018, the 5th Avenue Theatre presented Come From Away, a Broadway musical exploring a true story about the aftermath of the 9/11 terrorist attacks in a small Canadian town, and now, the 5th Avenue is bringing this show back to its Seattle stage.

Also returning along with this show is actor Christine Toy Johnson, who was delighted in 2018 to play the role of Diane, a Texan who falls in love with a Brit, and is reprising the role in this new North American tour. “I’m so happy to be coming back to Seattle with this show,” Johnson said, “and to be back in the beautiful city where our tour opened in October of 2018.”

What drew Johnson back to this show is its focus on open-hearted kindness. “Having done over 850 performances of it now, that is still true,” she reported. “The messages in the show resonate in an even deeper way today, as we continue to see how important it is to help each other out and to be generous with our compassion.”

In addition to performing, Johnson has been busy with writing and production projects. “During the shutdown, I was able to participate in a number of online opportunities, from presenting Zoom productions of a few of my own plays to participating in a few online presentations of other writers’ works,” she said. “I also was fortunate enough to do a fair amount of TV and recording work during that time, with strict COVID protocols on set to keep us all safe and healthy, while waiting for live theatre to come back.”

Johnson made intensive use of this unexpected time for writing. “I rewrote and expanded my play Empress Mei Li Lotus Blossom, a comedy about a New Jersey-born Asian American actress who poses as an exotic Hong Kong movie star in order to get her shot at Broadway,” she said, “which won a few prizes and had Zoom productions at the Abingdon Theatre Company in NYC, the National Women’s Theatre Festival, and the Greater Boston Stage Company.”

But the solitude of the COVID-19 shutdowns didn’t stop Johnson from pursuing collaborations. “I also wrote the book to a new musical with composer-lyricist Jason Ma that was commissioned by Village Theatre in Issaquah called Broken Ground, which centers a young woman’s discovery of a little-known writing system created by and for women during the Qing dynasty called ‘Nü Shu’ and features an all Asian and Asian American cast,” Johnson said. “We hope to see it on Village’s stage sometime in the future!”

Despite the challenges of the ongoing COVID-19 pandemic, Johnson feels privileged to be continuing her career. “I’m grateful to our unions and employers for making sure we have the support and systems in place to keep us as healthy as possible and manage plans for how to handle breakthrough cases amongst our company,” she relayed. “To date, we’ve had to cancel three performances, during the height of Omicron, and sadly the threat of having to shut down the show due to COVID-related illnesses is never far from our minds.”

Over the past four years, Johnson has escalated her advocacy work as well. “I continue to serve on the Council of the Dramatists Guild of America, the trade association that advocates for the rights of playwrights, librettists, lyricists, and composers” she said. “I was elected as Treasurer in early 2021, the first Asian American officer in the Guild’s 100-year history, and continue to serve as chair of our Diversity, Equity, Inclusion, and Access committee, and host the Guild’s podcast Talkback, distributed on the Broadway Podcast Network.”

She also maintains her work with the Asian American Performers Action Coalition (AAPAC) that she co-founded. “My advocacy work has been arguably even more robust since the pandemic began,” she said. “With the horrific rise in anti-Asian violence, not only do our stories matter more than ever, but also our vigilance and advocacy for our family, friends, and colleagues who are the most vulnerable.”

Johnson says the rise in anti-Asian violence presents a new kind of urgency. “The work we’ve been doing with AAPAC continues to be vital in creating context for how underrepresentation and the perpetuation of harmful stereotypes contributes to our dehumanization and erasure,” she said. “We see the direct line between these things and continue to provide data and various bridge-building initiatives to illuminate it, as a pathway to creating actionable solutions within the industry.”

To address this, Johnson’s goal is to create more Asian American and Pacific Islander characters and center their experiences in new stories. “AAPIs are still vastly underrepresented in the media, particularly in NYC theatres, which is AAPAC’s purview, and we are still fighting for our voices to be heard in many arenas,” she shared. “I recently had a meeting with a representative from the NBA, because of the documentary feature my husband Bruce Johnson and I made about Wat Misaka, the first non-Caucasian pro-basketball player from the 1947 Knicks, asking us to help make the case to higher-ups in the organization that Wat, a Japanese American man, was a ‘person of color.’ How is it in 2022 that we are still having to defend who we are and the history of AAPIs in America?”

In line with this focus, Johnson’s visit to Seattle will include time to highlight her own writing, a solo play with music called A Little More Blue. “It is about how my late father’s quest to be an all-American guy has galvanized my own journey towards making his dream into one of my own, through activism in the arts,” she described. “I’m thrilled that this labor of love has already garnered a few awards and am excited to do a private reading of it at the 5th Avenue Theatre while I’m in Seattle.”

Come From Away runs July 20 to August 7 at the 5th Avenue Theatre, 1308 Fifth Avenue, Seattle.