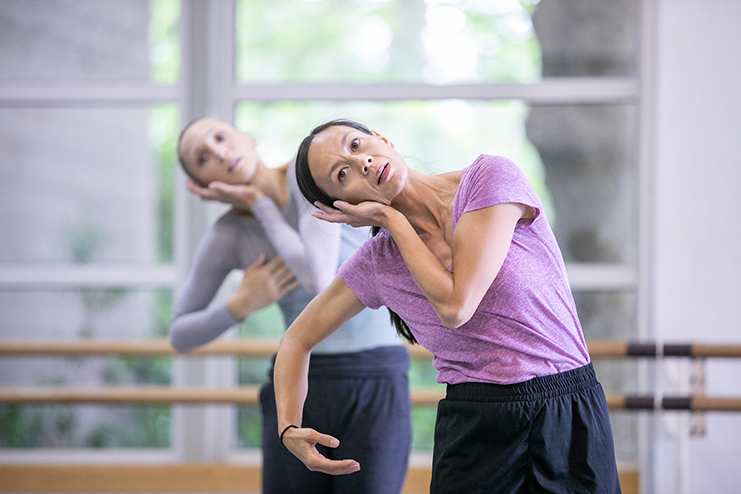 Pacific Northwest Ballet is again welcoming audiences to see performances in person at McCaw Hall, and coming up next is Plot Points, a slate of new experimental pieces by three choreographers. One of these choreographers is Robyn Mineko Williams, whose work previously graced PNB stages in 2019 with The Trees The Trees.

Williams reports that she is absolutely thrilled to return to PNB. “My time creating The Tree The Trees with the company in 2019 was a gem of an experience,” she recalled. “I came away with an awesome feeling of total happiness for the connection that the dancers, musicians, collaborators and I were able to build during our time together.”

Her new world premiere for PNB is entitled Before I Was, and arose out her pandemic experience of time at home with her seven-year-old son. “A huge part of his day is spent in wonder, totally in awe and in love with the seemingly small things,” she observed. “Watching him led me to the realization that I often run myself in circles in search of what he does, something that was once so natural to me – play, presence, silliness, wildness, trust, uninhibited authenticity.”

It was at that same age that Williams has her earliest memory of dancing. “I was about seven or eight years old, performing in our annual recital to theme song from the movie, E.T.,” she said. “I remember just loving all of it, the process of learning new moves, the build-up to the big show, donning my white and gold sequined tutu, the buzz on the other side of the curtain, and taking the stage for those three magical minutes our class had prepared for all year.”

As for many artists, the experience was compelling and intense for Williams. “I can remember the feeling I would have, post-recital, going to bed, completely teary and forlorn because it was all over,” she remembered. “I still get that same post-show blues feeling today.”

Williams continued to train, and then danced for almost two decades before transitioning to creating her own dance pieces. “It mostly happened as a result of my sense of knowing I needed a change of pace after 17 years in a rep company and then from deciding to say yes to whatever came my way,” she said. “As choreographic opportunities came, I took them no matter what they were, and by doing so, I discovered a real love for being on the other side of the lens.”

Then, in 2015, she founded Robyn Mineko Williams and Artists. “In 2015, I was eligible to apply for a Work In Progress residency grant at Baryshnikov Arts Center as a recipient of a Princess Grace Foundation-USA Choreographic Fellowship and decided to just go for it,” she reported. “I’d always wanted to make something ‘official’ with my brother, JT. He’s and artist himself and had been my lifelong creative sounding board.”

Williams was certain that if they received the grant, JT Williams, as an art director and production designer, couldn’t refuse the opportunity. “We ended up receiving the grant and started work on what was to become Undercover Episodes,” she said, “our first creation together, an immersive, site-sensitive, multi-disciplinary performance series of dance, music, and projection.”

But Williams isn’t a musician herself, so she reached out to the community. “I brought on Chicago musicians, Robby Haynes and Tony Lazzara, to join the team, too, which brought yet another perspective into the mix that had very little to do with dance previously,” she said. “The different ways we thought about concept, audience involvement and aesthetic created a style totally of its own.”

From then on, Williams insisted on collaboration as a way to create new work. “It pushed me to form RMW&A as an independent umbrella for Undercover Episodes and the future projects and experiments we made to live under,” she said. “Creating alongside other minds towards a unified vision has become not only a favorite practice for me but an essential one in order to find growth, connection, and evolution in my craft.”

Shaping dance, Williams says, isn’t just about bodies moving in space. “I’m very grateful for the continued opportunities to keep making, to keep working and stretching my imagination, and mostly to keep connecting with the brilliant people I meet and get to work with along the way,” she said. “The people and the relationships I make continue to be the best part of this adventure.”

That holds true for this newest world premiere. “Before I Was marks my second collaboration with the brilliant minds of Chicago rock duo, OHMME,” she said. “OHMME has created an original orchestral score that they will perform live alongside PNB.”

At the same time, this new piece returns to her most passionate roots. “I’m looking forward to exploring this innate ‘kid magic’ and how it shifts in radiance as life goes on,” she said. “I’m really excited to bring OHMME’s energy to the ballet and can’t wait to see and share the physicalization of this fantastic new blend of voices.”

Robyn Mineko’s “Before I Was” will be performed as part of Plot Points from March 19 to 27 at Pacific Northwest Ballet, McCaw Hall, 301 Mercer Street, Seattle.