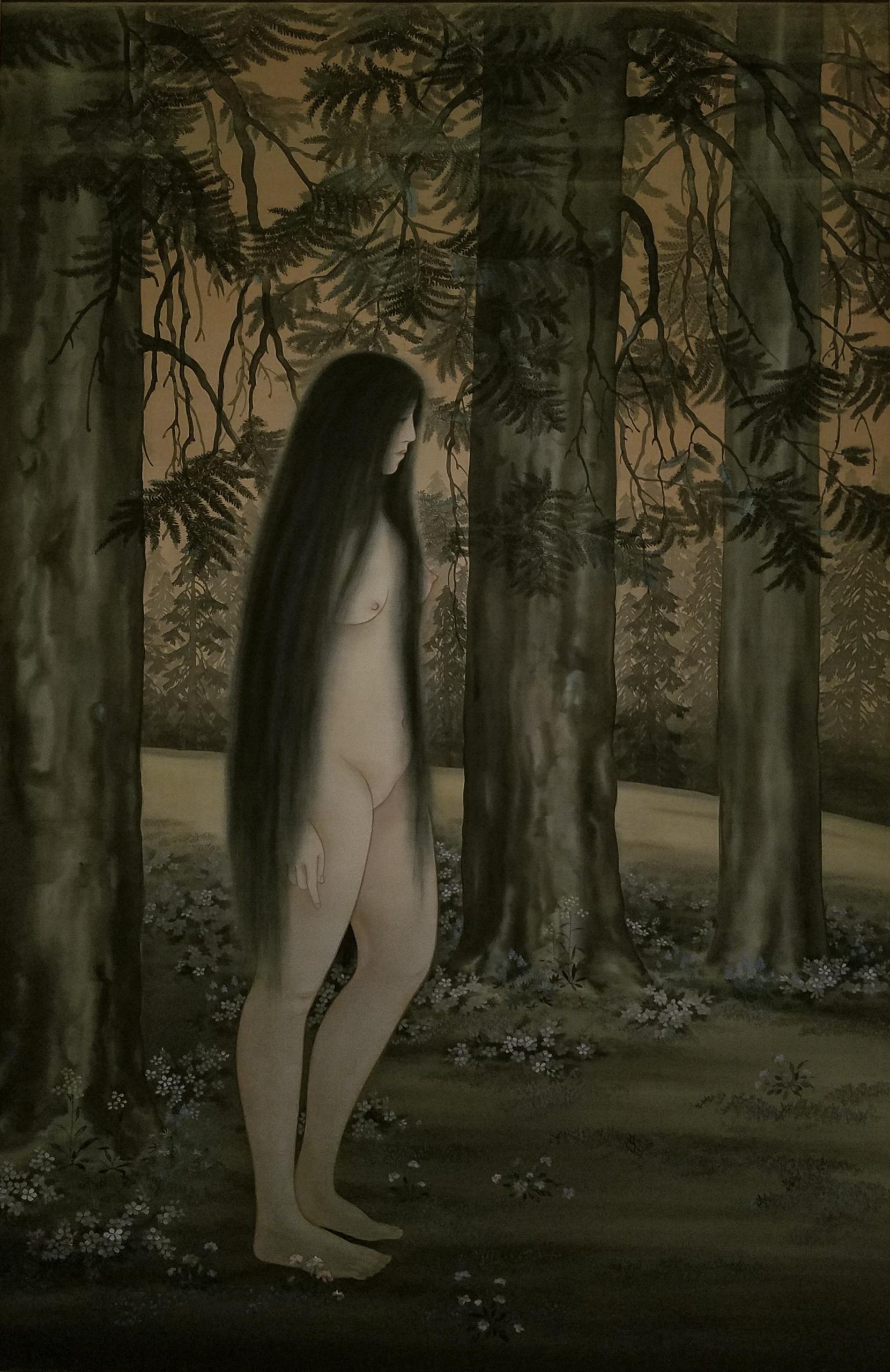 If you have seen the strikingly original prints of Yosemite by the Issei artist Chiura Obata (1885-1975), you already know something of his genius, but a new retrospective exhibition and its accompanying catalog brings the kind of revelation and wonder of a first experience. And for those not familiar with his art, prepare to be astounded.

Chiura Obata: An American Modern is an exhibition of over 150 pieces and a rare opportunity to see numerous privately held works, many never publicly shown before. Remarkable in its variety and breadth, it includes representative items from his childhood to his mature years, in a plethora of media, including woodblock prints, black ink and color watercolors, scrolls, paintings on silk and silk panels, a poetry portfolio, and even magazine covers.

Although there have been previous retrospectives of Obata works, the inclusion of so many pieces and genres in this unique exhibition not only provides a chronological context and narrative to his artistic evolution, but also an exhibition of his technical acuity, stylistic variety and artistic depth.

On the surface, many of Obata’s traditional works might appear no different than those by other Japanese artists, including those from the European influenced “Nihon ga” style from where he began. Looking deeper, however, there is exquisite technique and a non-conformist spirit in his works. Maiden from the North resembles the genre popular in Japan at that time, but a very close examination reveals the skill with which Obata incorporated the painting’s actual silk surface texture into exquisitely detailed kimono elements. Similarly, his black ink paintings (“sumi-e”) of animals may look typical, but in his deft hands, each animal’s unique essence is suggested with the most minimal of lines.

As proficient as Obata was in creating tranquility and ethereal moods, he could also be counted on to create the darkest of moods. The devastating portrayal of Hiroshima and his family’s personal story of loss from WWII, portrayed in the symbolical filled Landslide, are gravely somber. And few painters can rival his skill in the sweep of power and destruction of nature at its fiercest in pieces such as Glorious Struggle.

The American elements are important and make his art distinct from other Japanese artists. When supervising Japanese woodblock carvers for his Yosemite prints, Obata had to ensure details were adhered to because they were so different from traditional Japanese elements and colors. He had to explain that American pine trees were distinct from Japanese ones and that rock formations the size of skyscrapers really did exist.

Not content with merely reproducing Japanese painting traditions, Obata also incorporated modern elements in his artwork. Especially in larger works, there are elements taken insolation that are thoroughly abstract. A folding screen entitled Moonlight features Point Lobos, a repeated and favorite site for him. It not only has surreal colors and abstract elements, but also employs strong cubist influences.

Obata’s landscape colors were not meant to reproduce reality. Like Ansel Adams (a friend of Obata), who used black and white photography to evoke a heightened grandeur of nature, Obata used unique techniques and new colors to achieve the same result. Thus, Obata’s vision of the Grand Canyon is colorful in a way that is only distantly familiar, as Obata’s zen sensibilities sought to bring the experience of seeing, and not merely outward appearances.

Likewise, it is far too simplistic to judge Chiura Obata outwardly as just another Japanese artist or to argue if he was too American to be Japanese, or vice versa. This exhibition shows he was a complex individual and too rebellious to be merely put in any box.

As an exhibition, Chiura Obata: An American Modern is rich in art and impressive in numbers and scope, but weaker in telling Obata’s story and connections in the art. In this initial showing in Santa Barbara, there are scattered text descriptions, usually rich quotes from Obata himself, but much is left to the viewers to infer by themselves, and time-pressed or casual visitors will miss out. After Santa Barbara, modified installations will travel to Salt Lake City, Okayama, Japan, Sacramento, and will finally finish at the Smithsonian.

The exhibition book nicely fills that gap in information. Essays by some notable experts, including the ever reliable Greg Robinson, are well written and represent the artist solidly, as do the artist’s own words in essays and a rare interview. Although not all the exhibited works are here (only 91 of the works are reproduced), it is the first time many of these pieces have been published.

But nothing can replace actually seeing Obata’s works in person, especially when it comes to the impact of his larger pieces. The centerpiece of the show, Mother Earth, is a masterpiece – its brilliant juxtaposition of blurred and sharply defined elements, yellow ochre sky, haunting female subject make it Obata’s Mona Lisa. Truly stunning in its glorious seven feet of height, no book reproduction can capture it.

Simply, Chiura Obata: An American Modern is an exhibition not to be missed.

An extensive history of a century of Thai cartooning

From the everyday to the bizarre, “Hokusai Manga” collects the hand of a master in a new accessible format