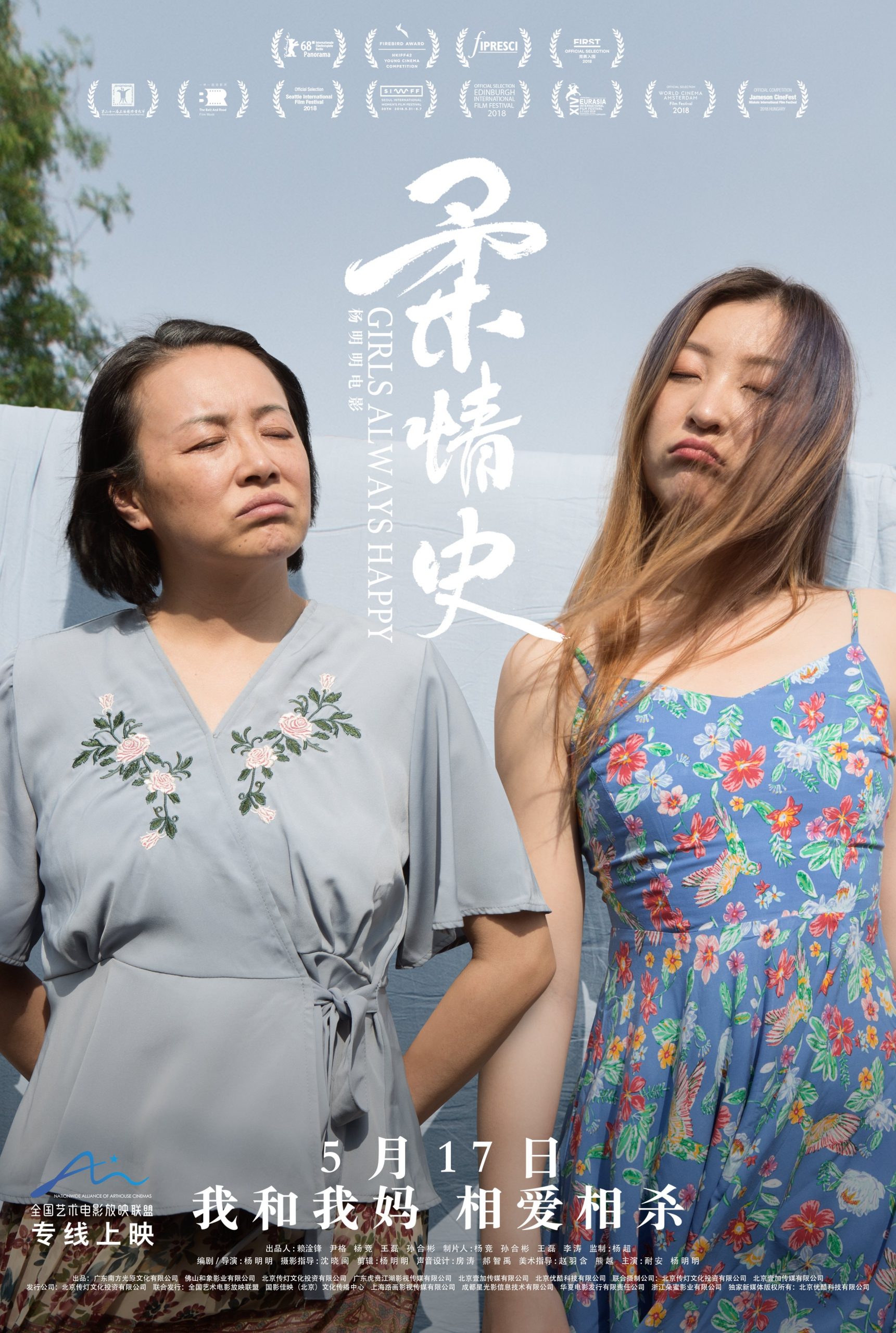 Girls Always Happy, the first feature-length film from writer, director and star Yang Mingming, is a cinema verite-esque exploration of the dysfunctional codependency between a widow (Nai An) and her 20-something daughter, Wu (Mingming). The two women are similar – perhaps too much so; both headstrong and opinionated, as well as alternately petulant, conniving and entitled. Within the close quarters of Wu’s hutong flat these traits are magnified and often clash. Mother criticizes daughter; daughter talks back; lather, rinse, repeat.

Overall the narrative is too long and drawn out, but in a handful of scenes certain issues bubble to the surface in poignant ways. These recurring themes include the hardship and long-term uncertainty of being a woman without a husband in such a traditional, patriarchal society, poverty, and the challenges of making a living as an artist. The director, like the character she plays, was raised by her mother in one of Beijing’s hutongs, making one wonder the extent to which (if at all) the toxic relationship portrayed onscreen is autobiographical.

Wu and her mother’s flaws and vices give rise to highly charged and entertaining exchanges, but leave little room for sympathy. Everyone probably has people like them in their extended family – they’re the ones to avoid at family gatherings and who are gossiped about mercilessly in their absence. Though Girls Always Happy is somewhat muddled and rough around the edges, Mingming’s talent for storytelling and sharp characterization is clear. 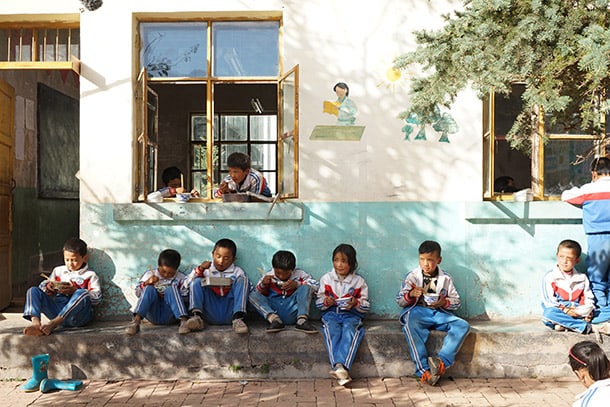 As part of Berlinale’s Generation Kplus sidebar, which aims at engaging youth and children with global independent cinema, director Lhapal Gyal’s Wangdrak’s Rain Boots portrays rural village life in the Tibetan highlands though the eyes of a young boy.

It’s rainy season and first grader Wangdrak (Druklha Dorje), in his track suit uniform and Power Rangers backpack, is the only one at school who doesn’t have the proper footwear. The others tease him for his worn sneakers which make him slip and slide along the village’s muddy paths, and which he has to let dry each night by the fire. His best friend, Lhamo (Pakmo Yangdrom), is the only person sympathetic to his plight, carrying Wangdrak on her back through puddles too big to jump across and standing up to bullies on his behalf. The children aren’t the only ones paying careful attention the weather reports – with harvest season imminent the adults of the agricultural collective are relying on the village’s spiritual leader to protect the crops from the elements.

On the surface, Gyal’s film is a kids’ movie that offers an unadulterated perspective on an insular community and its way of life; the cinematography captures their small world from the worn wooden desks and bare concrete walls of the classroom to the children’s simple toys and games, which contrast against the expansive landscape surrounding them. At the same time, though, the filmmaker teases out the friction between generations. The adults and elders adhere to traditions and faith that the young ones don’t understand nor appreciate, raising the question of what the future of a culture whose youth don’t particularly identify with looks like.

Regardless, the film’s beauty and charm lies not only in its arresting imagery, but also in its ability to powerfully evoke sensations like the sheer joy and feeling of invincibility that comes from stomping and splashing through water with a pair of rain boots on your feet. 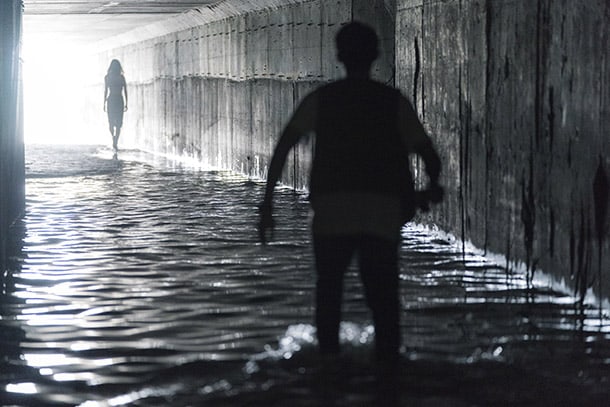 From the depths of the urban jungle that is Taipei, a woman has vanished, and no one seems to have really known her at all. Part fever dream, part noir, writer/director Maren Hwang’s Xiao Mei is a dynamic, playfully constructed puzzle film about loss, identity and human connection.

Set to a thrumming soundtrack by Luming Lu awash in bright saturated hues, Xiao Mei comprises a sequence of punchy vignettes featuring people who knew the missing girl including her landlord, her ex-boyfriend, her mother and a former classmate. Shot like confessionals, with the characters directly addressing the camera as though it is the lead investigator in the disappearance case, each sequence offers up a slightly varied perspective on who Xiao Mei was. The pieces don’t necessarily fit together to form a cohesive whole, but rather shed light on a multifaceted woman who represented very different things to the various people in her life. The camera tries to form an accurate representation of Xiao Mei in her absence, but it’s like trying to hold water in cupped hands; real meaning proves elusive and what remains instead are the ideas and fantasies that others projected onto her.

This is Hwang’s first feature film. Given the strength of each sequence, it’s clear that he’s a master in short form storytelling, unsurprising in light of his advertising background, but the overall effect of stringing all the shorts together is slightly uneven. The mystery element of the narrative prevents it from all falling apart, and the unexpected camera work keeps the audience engaged and guessing what will come next.

Raman Hui’s follow-up to Monster Hunt, one of China’s highest grossing films in history, is a big budget fantasy steeped in exquisite production design that still delivers on story and character, and doesn’t require seeing the original to have a good time.

In a world that vaguely resembles ancient China, albeit with monsters, newlywed couple and aspiring monster hunters Huo Xiaolan (Bai Baihe) and Song Tianyin (Jing Boran) are adjusting to life post-Wuba – Wuba being the radish-like monster that Tianyin gave birth to in the first film. (And yes, Tianyin is the husband). Believing that little Wuba would be better off being raised amongst his own kind, they sent him off to the monster world not knowing that, due to a prophecy, he would soon be targeted by both monsters and humans alike. Monster Hunt 2 sees both sides vying to find Wuba first, though unbeknownst to everyone he’s hiding in plain sight with gambling con man Tu Sigu (Tony Chiu Wai Leung) and his monster sidekick.

Given Hui’s Dreamworks pedigree (he served as co-director on Shrek the Third), it’s not surprising that the first film was such a hit. His approach, full of camp, slapstick and zingy one-liners, doesn’t detract from the values that Hui’s previous work promotes – those of tolerance and cooperation despite differences. As silly and over-the-top as Monster Hunt 2 can be, it’s still a fun ride best enjoyed by families but entertaining regardless for adults.