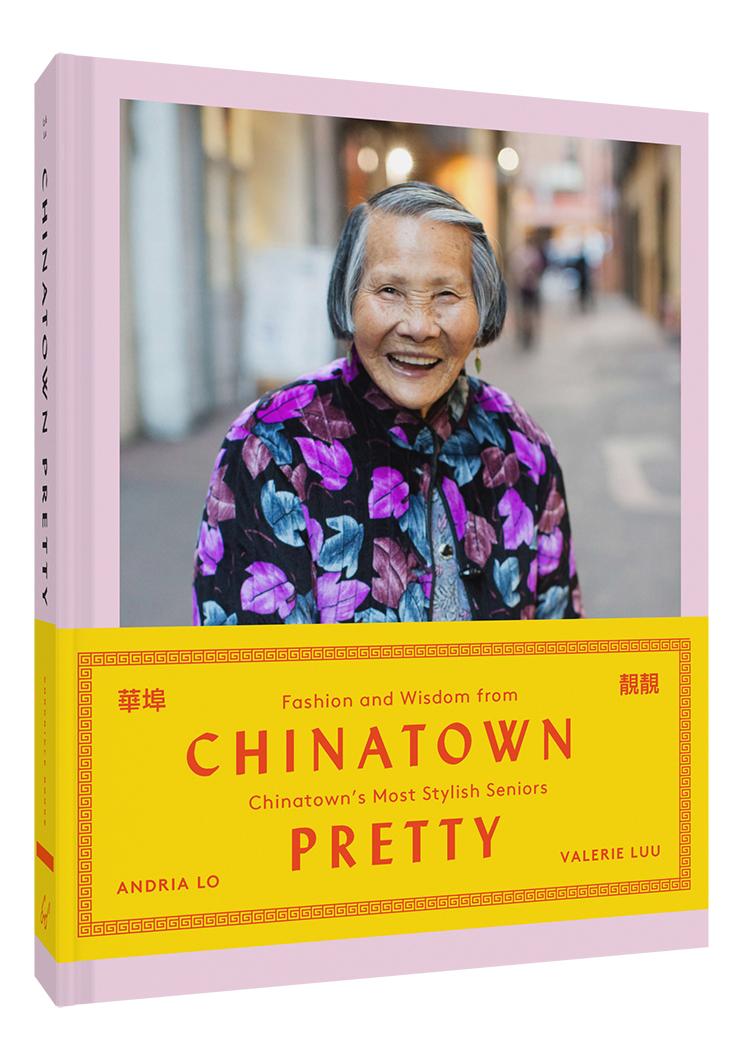 Chinatown Pretty is a collection of full color photographic portraits and interviews of Chinese seniors with a sense of style in their wardrobes.

All of the interviews and photographs are done on the street with seniors whose style of dress caught the attention of Lo and Luu. The two journalists were adept at meeting the seniors on the street and engaging them in conversation and photographing them.

Lo is a freelance photographer and Luu is a writer. Both live in the San Francisco Bay Area.

“This project is dedicated to all the grandmas and grandpas who took the time to talk to two strangers who were so curious about their clothes that they needed to stop them on the street,” according to Chinatown Pretty’s opening statement. “What would start out with us waving and smiling or exclaiming ‘poh poh hou leng!’ (‘pretty grandma’) would lead to personal conversations about their life journeys and immigration stories, their joys and their pains. These seniors taught us not only how to dress with joy and abandon, but also how to live a meaningful life. This book is for them.”

The authors came up with the term Chinatown Pretty, inspired by a “delightful mix of modern and vintage, high and low, bold patterns and colors.”

Huitang Deng, 75 years old, was named “Two Hats” by the authors. A San Francisco resident, he was wearing seven layers of shirts, plus a turtle neck and a back and tan vest, in addition to a fleece sweater.

Deng wears two hats. A grey beanie under a gray ivy cap. “I got this hat in Chinatown.” Deng removes the beanie and offers it to Lo and Luu.

In his right hand is a green umbrella with a children’s design. He’s a huge fan of Charlie Chaplin and Gene Kelly. He says he likes to dance in the rain with the umbrella just like Kelly did in his movies.

Charlie was asked about his youthfulness and what his secret was. “I know how to live, so I live long. Don’t smoke. Don’t drink whiskey. And I don’t have too many wives.” In Chicago, the book introduces us to Hang Ching Yip, given the nickname “Cowboy Boots,” by the authors.

The 88-year old man wears brown leather cowboy boots. A red knit hat keeps his head warm. He’s has a belt bag around his waist. His hands are on the handle bars of a mountain bike. Draped over the handle bars is a purple children’s purse with the name “Olivia” printed on it, along with a giraffe and an owl. A plastic grocery bag reads “Thank You” while featuring a hug smiley face.

“It was the accessories which made this outfit: the red beanie cocked just so, a purple basket with “Olivia” written on it and cowboy boots with athletic pants tucked into them.” The boots were a present from a friend,” Henry says.

Some of the Chinese elders were photographed in more than one outfit with detailed shots of their clothing and shoes.

Curry Puff lives in New York Chinatown and is dressed in a blue dress shirt and a brown tie with white stripes and aviator style sun glasses. His real name is Farn S. Lee. He was the first in his family to attend college, and he studied structural technology at the New York City College of Technology.

Curry Puff carries a comb to keep his gray hair neat and brushed. His daughter refers to his hair style as “Curry Puff” and is combed in a way to make him look taller. “The Malaysian waitresses in Chinatown used to tease him for sporting a gaa lei gok (Curry Puff),” his daughter said.

“He always keeps a comb in his pocket,” she adds.

You Tian Wu prefers bright red suits with matching pants and shirt. The authors call him “The One.” “Someone you may tragically never unite with but are connected by Fate.”

When the three met, “The One” was in his red suit. He as wearing a loud colorful flower tie and a bolo tie fashioned out of old Marci Gras beads.

The 82-year old was asked about his fashion philosophy. “When you are young you don’t have to care about fashion. But when you are old, you have to,” said the San Francisco resident.

New York’s Victor Lee’s nickname in the book is “Space Culture.” He has an easy going mustache over a wide grin of a smile. He wears a red knit shirt with an orange collar, dark green sweater with gold buttons and a lighter green patterned sweater on top and a green knit hat.

Around his neck hangs a long gold chain with an orange and white polka dot bow tie attached. In other photos, he has the same bow tie clipped to his sweater.

“It’s now in style. Normally I wear a down jacket, but i wanted to be more fashionable,” he said.

His jeans had hand written Chinese characters on it. “Space Culture,” he replied. “You know. The sky, airplanes, UFOs.”

Chinatown Pretty features high quality printing for excellent photo reproduction. The authors showed a unique ability to gain the trust of the Chinese seniors and turned their “ordinary” stories into an interesting read.

The stories are a perfect compliment to the engaging photographic portraits.