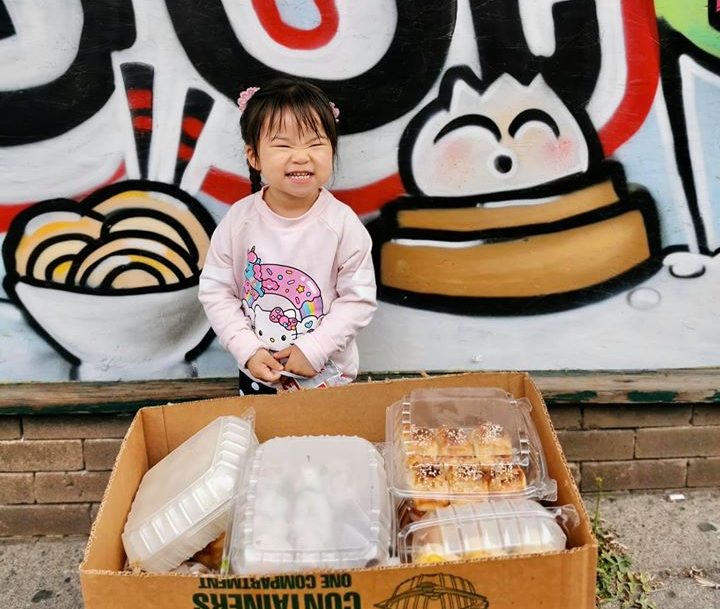 A quick aside before getting to this week’s news: Beginning Saturday, May 22, the International Examiner will have available a limited edition run of THE BIG ISSUE — a special print edition of the IE containing all COVID-19 coverage we produced March through May. It’s 28 extra-large pages containing stories of our API communities, activists, organizations, restaurants, businesses and more as we make our way through the pandemic. The issue contains OUR voices, told by the IE, at a critical time in our community’s history.

How do you get this issue? If you donate to the IE at $100 or higher, we will mail this issue to you along with a postcard package with IE cover art and a special invitation to a book launch party (to be held later this year) for Ron Chew’s highly anticipated memoir, My Unforgotten Seattle, to be released this fall. There are also 10 restaurants in Chinatown-International District who each have copies to give out with take-out orders. Those restaurants include Hood Famous Bake Shop, Tai Tung Restaurant, Jade Garden, Kau Kau, Oasis, Bobae (Woodinville), New Star, Pho Bac Sup Shop, Eastern Cafe and Purple Dot. Support them with a take-out order, and you’ll get a copy of this issue until they run out of copies.

Own a piece of history, make a donation, support community journalism and API representation. Again, we have a very limited amount of print copies of THE BIG ISSUE available. Get yours now with a $100 donation to the IE and keep it on the shelf for years to come. It’s another chapter of resilience and community strength in the lifelong story of Chinatown-ID and the regional API community. 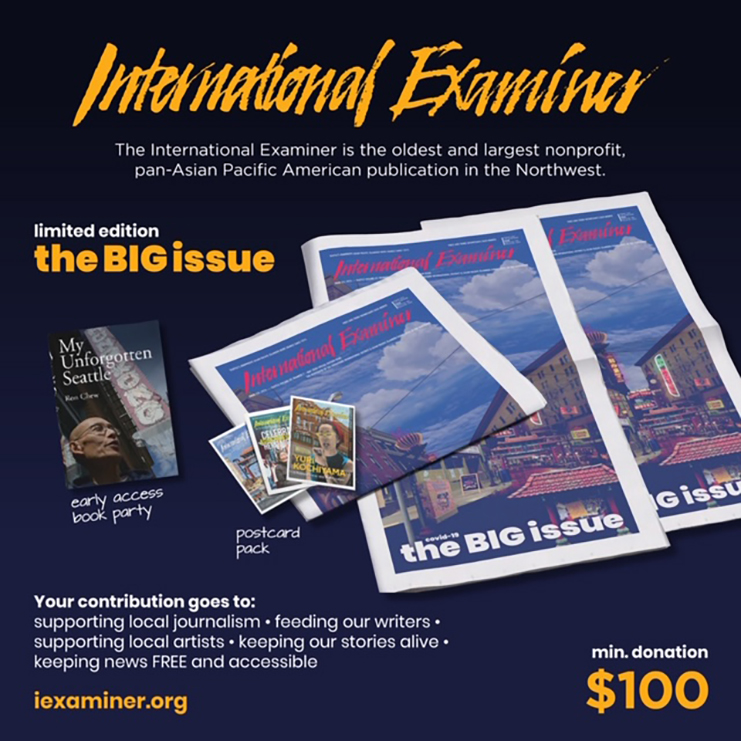 Northwest Asian Weekly reports the story of Kert Lin, a Chinese American man who was harassed with racist language from a stranger at the Home Depot near the CID, and said the police officer who arrived on the scene did not take his concerns seriously. When an officer arrived, Lin was told that the man’s speech was protected by the First Amendment, and so the officer did not file a report. Lin said SPD Chief Carmen Best called him two days later to apologize. Lin told Northwest Asian Weekly he is concerned that SPD’s promise of zero tolerance for bias and hate is not being put into practice.

The City urges anyone who experiences or witnesses an act of bias to report it. You can call the City’s Bias Hotline at 206-233-7100 or visit www.seattle.gov/reportbias. Reporting can be done anonymously.

Dr. Sue Tomita, one of the founding members of Asian Counseling and Referral Service (ACRS) passed away on May 10. “Sue was among the first ACRS therapists who provided care and a safe, welcoming space for Asian Americans in need in the 1970s,” according to a Facebook post from ACRS. Tomita’s leadership helped lay the foundations of the organization, according to Dave Okimoto, former ACRS executive director 1976-1985. You can read an obituary of Tomita here. ACRS shared some videos to celebrate and remember Dr. Tomita and her legacy:

The annual Pig Roast at the Danny Woo Community Garden is cancelled this year. This year would have marked the 45th year for the community event, celebrated every second Friday of July. The group will still celebrate food, culture and community in July — more details to come.

King County’s new public health directive urging people to wear masks took effect May 18. The directive encourages people to wear masks while in stores, on public transport, or when outside where it’s impossible to keep six feet away from others. The directive notes that wearing a mask should be done in addition to other measures to slow the spread of coronavirus, including physical distancing, avoiding non-essential outdoor activities, washing hands and not touching one’s face. The directive is not intended as a reason for law enforcement or others to arrest or detain people not wearing masks, but is intended to to encourage people to wear them.

Last week, Gov. Inslee reversed a stance on a requirement that restaurants must collect contact information from customers who go there to dine, if they want to reopen, the Seattle Times reported. Inslee’s previous guidelines required restaurants to keep a daily record of customers and their contact information, to help with potential contact tracing. On May 15, Inslee released a statement clarifying that customers would not need to provide this information, but can do so if they wish, and restaurants should keep a list of customers who choose to do so. Inslee’s initial guidance was criticized by the American Civil Liberties Union (ACLU) of Washington as opposed to people’s rights to privacy and association. Several counties in Washington are allowed to start Phase 2 of Inslee’s four-phase plan for re-opening. Phase 2 allows restaurants to operate at 50 percent capacity. King County might be ready for Phase 2 in June, the Seattle Times reported.

A second round of grants for small businesses from the Chinatown International District (CID) Restaurants and other Small Businesses Relief Fund has been announced. The second round is for retailers and other small businesses that have suffered losses due to COVID-19; the first round focused on restaurants and other food service businesses. The grant amount is $1,500. It is available to qualifying businesses that have not already received more than $5,000 in grants. The fund is still accepting donations here. If your business has been identified as qualifying for this round of grants, staff from one of the organizations administering this fund will be contacting you directly by email or phone by 5pm, Friday, May 15th.  If you believe your business qualifies and you have not heard from us by the end of the day on Friday, please inquire via email at [email protected] IE Contributor Claudia Yaw recently wrote about the fund, which is co-managed by the Seattle Chinatown International District Preservation and Development Authority (SCIDpda), CID Business Improvement Area (CIDBIA), and Friends of Little Saigon (FLS).

International Examiner contributor Patranya Bhoolsuwan checked in with AAPI businesses in the CID and elsewhere in Seattle to see how they are shifting operations to respond to the COVID-19 pandemic. Business owners have weighed whether to offer products online, how to be creative in serving the community, and how to avoid overextending themselves. You can read her piece here.

In The Daily of the University of Washington, writer Etsey Chen reports on how the children of restaurant owners are helping their parents keep the businesses afloat during the COVID-19 pandemic. Those interviewed include Ivy Chan, a UW grad who has been working 10-hour shifts at her family’s restaurant Jade Garden, Carol Xie, whose father owns Purple Dot, and who has served as the restaurant’s photographer, accountant and social media manager all in one, and Yongkang Zhou, who balanced being a student while spending weeks helping his family fill out over 40 pages of paperwork for the  Paycheck Protection Program.

The annual Pride ASIA festival that takes place in Hing Hay Park will be held virtually this year. According to Pride ASIA co-founder Aleksa Manila: “The initial decision collectively was just to follow everyone and cancel, but there was still such a cry, that need of finding a virtual space to connect as a response to hatred and violence…so we wanted to make sure to continue the tradition of doing pride Asia fest, even though it’ll be in a virtual space.” This year’s virtual Pride ASIA fest will be on May 31st, and it will include a virtual Q&A/forum, with a panel of speakers that will talk about various topics that relate to COVID-19 as well as the community, as well as performances throughout the event. Read more about Pride ASIA and the upcoming celebration in this article by IE fellow Angel Chi.

Looking for things to read during quarantine? It’s a good time to catch up on some thoughtful writing from two of Seattle’s great columnists, who took home several local journalism awards Tuesday. Writer Glenn Nelson of Crosscut won three first-place awards from the Society of Professional Journalists Northwest Excellence in Journalism contest (the full list of awardees can be found here) for his columns on race and culture. The award-winning columns include a piece about the legacy of Ichiro (Nelson, like the famed baseball player, was born in Tokyo), gentrification in South Park, and across Seattle as a whole. Nelson also wrote last year about how the Chinatown-ID is struggling to survive amid immense change. You can read all of Nelson’s columns here. Naomi Ishisaka, who writes about race, culture and equity at the Seattle Times (the IE interviewed her in December), was a second place winner among large newspapers in the region for her columns on surveillance, immigration, and affirmative action. You can read all of Ishisaka’s columns here.

May is Asian Pacific Islander American heritage Month. The Seattle Channel, which is dedicated to documenting and sharing the city’s arts, culture, and politics, has a great deal of programming in its archives highlighting the city’s Asian American and Pacific Islander communities. A video from 2018 captured dancers, drill teams, musicians, and martial artists performing at Seattle Center as part of its Festál celebration honoring Asian Pacific American Heritage Month. You can explore Seattle Channel’s archives at http://seattlechannel.org/

Beam Apartments, a new development in Little Saigon, will be opening in early 2021. Local artist Hannah Pham is designing some of the public artwork. If you’d like to have input on the direction of this art, you can fill out the survey here.

At 6:30 this afternoon, the Museum of History and Industry is hosting a free webinar titled History Café: Resilience Past and Present in the Chinatown International District. It will feature CID Coalition/#HumbowsNotHotels activists Cynthia Brothers (also of Vanishing Seattle) and Marlon Dylan Herrera, who speak about past and present organizing in the CID, “including how community members are responding to the inequalities laid bare by COVID-19 through mutual aid and advocacy, to leverage this moment of crisis in support of lasting, transformative change for the neighborhood.” The first 500 people to register for the webinar can participate. Sign up here.