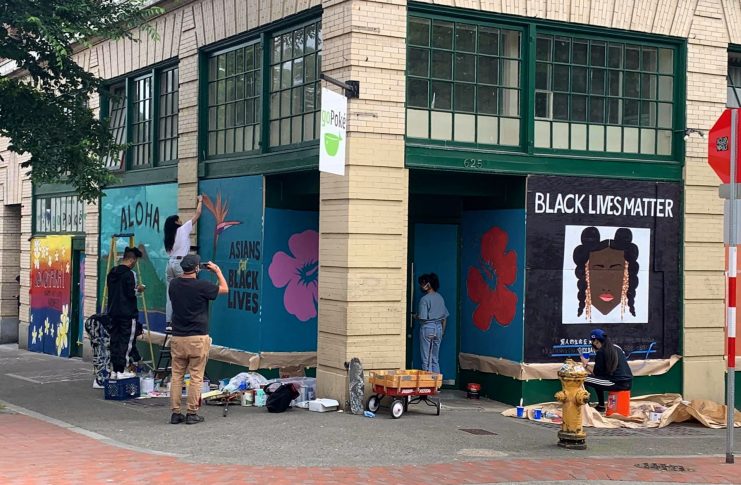 Responding to the murder of George Floyd, a Black man, by Minneapolis police, demonstrators marched against police brutality and racism through the streets of downtown and throughout the city. IE Contributor Grace Madigan has a photo essay of the demonstrations.

Several businesses in the CID suffered vandalism on May 29 and 30, including Dim Sum King, Jade Garden, Phở Bắc Súp Shop, Chengdu Memory, Chu Minh Tofu & Vegetarian Deli, Universal Tours travel agency, Lexor beauty supply store, Seattle Vision Clinic, a chiropractic clinic, as well as a FedEx, Bartell Drugs, Bank of America, Washington Federal Bank, and vacant commercial spaces. According to Valerie Tran, operations director for Friends of Little Saigon, the damage — which ranges from graffiti to broken windows and looting — further harms a neighborhood that has suffered disproportionately during the COVID-19 pandemic. The pandemic led to a decline in business in the neighborhood, followed by an increase in vandalism, because fewer people were out in the neighborhood. “A number of our businesses have already been hit during COVID, and then for this to happen on top of that makes it that much more difficult to look into recovery,” Tran said. Look out for a full story about the damage to businesses in the CID soon.

SCIDpda, Friends of Little Saigon, and the Chinatown International District Business Improvement Area (CIDBIA) coordinated to help businesses board up their windows if they chose, to cover damaged windows and prevent future damage. The organizations also set aside a portion of their small business relief fund to help businesses pay for repairs. Groups of volunteers cleaned up trash, scrubbed graffiti off businesses, and helped board up the windows in businesses, later with the help of Seattle Public Utilities. A group of artists came by to spray-paint the boards with information, art, and messages of solidarity with the Black community. The CID Restaurants and other Small Businesses Relief Fund is still accepting donations. All donations made between May 30 to June 6 will support repairs to small businesses that were damaged last weekend. If the need is greater, the organizations will consider expanding this fund.

Former CID resident Matthew Toles started a neighborhood block watch, KUOW reported. About a dozen people patrolled the neighborhood on its first night, June 2. “What we’re doing is we’re being visible and we’re having a presence in order to protect our community,” Toles told KUOW.

Henry Liu, who leads community engagement at InterIm Community Development Association, has now been delivering groceries to seniors and families in the CID for over 11 weeks, and documenting the work in video. Watch week 11 here, where Henry and volunteers deliver groceries and bouquets of flowers donated by the Hmong Association of Washington: https://www.youtube.com/watch?v=zUxdT293_4s

On Friday, June 5, artists, community activists and others gathered with paint and paint supplies in Hing Hay Park and worked throughout the CID to paint murals on the boarded up windows of the neighborhood businesses. The effort was spearheaded by regional artist Che Sehyun who collaborated with others in the community to raise funds for supplies, secure supply donations from Home Depot and bring the community together to paint an estimated 100 murals.

King County is ready to move into an early phase of re-opening, allowing businesses to re-open in a limited manner in accordance with social distancing and other public health guidelines. The plan allows restaurants to operate at 25 percent capacity (and 50 percent for outdoor dining), and non-essential retail businesses can re-open at limited capacity. Other businesses, such as barbers, nail salons and tattoo parlors, as well as professional services like accountants, attorneys and insurance agents, can also re-open at 25 percent capacity.

On June 10, City Council will once again take up a bill from Councilmember Tammy Morales (District 2, the CID and southeast Seattle) that would formalize the City policy, adopted in March, to stop dismantling outdoor encampments, with a few exceptions. On May 27, City Council’s Select Committee on Homelessness Strategies and Investments deliberated on the bill for five and a half hours, but did not take a vote. The legislation comes after the City removed an encampment near Little Saigon outside the Navigation Center on May 21. Protesters, including members of the CID Coalition, made a showing at the encampment removal. In March, Mayor Jenny Durkan temporarily suspended the practice of sweeping encampments during the coronavirus pandemic, unless encampments pose an emergency public health risk and shelter is available to people. This follows guidelines from the U.S. Centers for Disease Control, which advise that encampments not be moved if no adequate shelter is available. Morales’s bill aims to codify this policy and stop funding for sweeps that do not meet these criteria. Look out for a full story about the sweep and the Council legislation soon in the International Examiner.

Former Washington Governor Gary Locke — the first Chinese American to serve as a governor in U.S. history — has been named interim president of Bellevue College, the Seattle Times reported. The college’s former president, Jerry Weber, and the vice president of the college, resigned at the beginning of March for their role in defacing a mural “Never Again Is Now,” which commemorated WWII Japanese American incarceration. Locke has never worked in academia, but has had an extensive political career, including serving as King County Executive, as a state Representative, Governor, and serving as secretary of commerce and ambassador to China during the Obama administration. Look for an upcoming article about his appointment to this position in the IE in the near future.

Life On The Margins podcast, hosted by Jini Palmer, Enrique Cerna and Marcus Harrison Green, has a recent episode about coronavirus racism. In this episode, the hosts interview Kert Lin, who was recently the target of a racist incident at a south Seattle Home Depot. CID community activist Matt Chan also joins the conversation to talk about the incident. Listen here.

The annual Pride ASIA festival that takes place in Hing Hay Park will be held virtually on June 7 this year. The festival was originally scheduled for May 30, but was moved out of respect and solidarity with this weekend’s demonstrations after the murder of George Floyd. This year’s virtual Pride ASIA fest will feature performances and a Q&A/forum, with a panel of speakers that will talk about various topics. Read more about Pride ASIA and the upcoming celebration in this article by IE fellow Angel Chi.