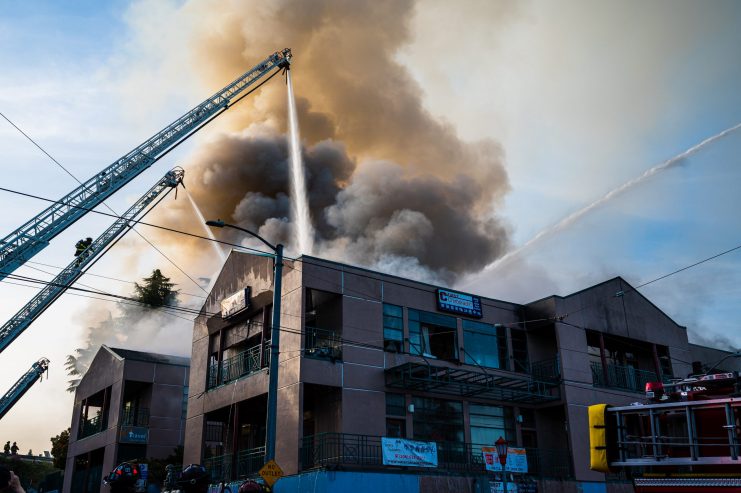 Seattle fire fighters worked to quell a fire that started before 5 a.m. at the Eng Suey Sun Plaza on 815 S. Weller St. The fire was under control by 7 a.m. and no one was injured, the Seattle Times reported. Fire officials initially considered the cause of the fire suspicious, because more than 10 fires were set not far away in the last 24 to 48 hours, but revised this after hearing from witnesses, KOMO reported. While a final determination has not been made, fire officials are not considering it suspicious. Police are investigating a series of arsons across the Central District and South Seattle, Capitol Hill Seattle reported. Before the fire in the CID on June 25, the Fire Department responded to several fires from June 22 to June 24, six of them determined to be arson.

800 Block of S Weller St: Fire investigators are continuing to conduct their investigation into the CID fire. While a final ruling has not yet been determined, after hearing further from witnesses, they are not considering it suspicious at this time.

Nationwide, the U.S. recorded the highest number of COVID-19 cases since April, the Associated Press reported, undoing progress in reducing the spread of the virus. Many states are setting records in confirmed cases and hospitalizations.

Amid a rise in COVID-19 cases in Washington, especially in Yakima, Gov. Jay Inslee announced an order calling for people to wear masks in public, the Seattle Times reported. The order takes effect June 26.

King County has been in Phase 2 in Washington’s four-phase reopening plan since June 19. Under this phase, restaurants and other businesses can re-open with limited capacity and hours, and social gatherings of five people are allowed. People should still regularly wash hands, wear masks, and practice social distancing. Under Phase 2, retail stores, libraries, gyms, personal and professional service businesses and restaurants may re-open, with limited capacity and following guidelines. Religious services and construction can also resume. For more information, see King County’s website.

The City is recommending people get tested if they experience COVID-19 symptoms. New Citywide testing sites are located in north and south Seattle and operate Monday to Saturday from 10:00 a.m. to 3:30 p.m. The site accepts drive-through clients who book ahead through the website. To get tested, you will need a photo ID with your date of birth. Testing is available regardless of your citizenship/immigration status. You do not need to have insurance or a doctor’s note to schedule a test, and you will not be charged for the test. If you have insurance, bring your insurance card. More information is available here.

King County has expanded its testing sites. Some require insurance. A list of COVID-19 testing locations is here, and you can view a map you of testing sites in King County here. Free language interpretation is available at all locations.

The International Examiner will be back in print as of Wednesday, July 1. Distribution will be limited to businesses in the CID and Little Saigon (and subscriptions). The IE did not print in the months of April, May and June because of social distancing.

CID Community Watch, a new volunteer neighborhood watch group, is looking for volunteers. The group patrols the neighborhood nine times per week, from 10 p.m. to 12 a.m. Sunday through Thursday, and from and 10 p.m. to 2 a.m. Fri through Saturday. The group’s number one tool to improve public safety is being visible out on the street, either as a helpful presence or a watchful eye, according to co-founder Matthew Toles. Those interested in joining can join the Facebook group, or show up at Hing Hay Park at 10 p.m. any night. Look out for an upcoming story about the group soon in the International Examiner.

As of June 19, 2020, Kin On Rehab & Care Center has completed the COVID-19 testing of their residents and staff on Jun. 11 and Jun. 12, fulfilling the State’s requirement of universal testing of all nursing homes. A total of 208 specimens were collected and tested. All residents, contractors, and staff members have tested negative, with an exception that one staff member has tested with an “inconclusive” result. The staff tested with an “inconclusive” result on Jun. 11 went for another test on Jun. 16. Their result came back negative. Currently, the staff member exhibits no signs and symptoms and is on a 14-day self-quarantine as a precaution, and will follow the “Return to Work” protocol. Said Kin On, “We are grateful to have the International Community Health Services (ICHS), mobilizing their team quickly to make this testing possible. We will continue to follow the State’s requirement of universal testing for the Assisted Living facility without memory care when details become available. As our state slowly reopens, it’s of utmost importance to make sure the wellbeing of our elders and the hardworking care staff remains a top priority. We need all of us to continue to practice good hygiene and social distancing to keep our community safe and healthy.”

The Seattle Bon Odori celebration has been held for 88 years, hosted by the Seattle Betsuin Buddhist Temple. Due to COVID-19, the celebration is going virtual this year. Those interested can join the celebration on YouTube July 18 at 4:00pm for the premiere of the online event. More information online at www.seattlebetsuin.com/vsbo

This year would’ve been the 45th annual pig roast at the Danny Woo Community Garden, but because of the pandemic, InterIm CDA has decided to cancel. The huge gathering of community elders wouldn’t be safe, says Danny Woo garden manager Lizzy Baskerville. While organizers think of potential alternatives to the pig roast, they’re also remembering what the event has meant for the community over the last 45 years. Read the full story by IE contributor Claudia Yaw here.

Undocumented workers in Washington are among the most affected by the COVID-19 pandemic, and not enough is being done to help them, Investigate West reports. Undocumented workers were completely left out of Congress’ COVID-19 relief bill, and while there are efforts to help them in Seattle, neither Congress nor the state legislature seem poised to do enough. A group of immigrants rights groups has raised more than $3 million to help those in need, but estimate they need $15 million to help everyone who applied for help.

Next week, the City Council will discuss and may vote on a new big business tax proposal to fund COVID-19 relief efforts introduced by Councilmember Teresa Mosqueda, which includes direct relief for undocumented immigrants. City Council is now weighing two such big business taxes: Mosqueda’s and a plan introduced at the beginning of April by Councilmembers Tammy Morales (District 2, southeast Seattle) and Kshama Sawant (District 3, central Seattle). Both taxes would draw from businesses with $7 million dollars or more of annual payroll, but Mosqueda’s is narrower, and would charge companies only for each salary above $150,000 dollars per year. Mosqueda’s bill would invest $86 million in targeted COVID-relief in 2020 (initially borrowed from City reserves and then replenished), and would support City investments that would ordinarily be cut due to COVID-19 2021. The tax would be collected in 2022, and that year would spend $200 million each year on affordable housing, small business support and equitable development efforts, until it expires in 2030. Morales’s and Sawant’s proposal raises $500 million per year, and in its first year would fund emergency COVID-19 payments for low income people, before funding affordable housing and Green New Deal measures. It has no expiration date.

The Supreme Court ruled on June 18 that DACA, or the Deferred Action for Childhood Arrivals Program, could remain, deciding that the Trump administration had failed to give an adequate justification for ending the Obama-era program that allowed teens and young adults brought to the U.S. as children — but who lack legal status — the chance to study and work without fear of deportation. Approximately 16,200 immigrants with DACA reside in Washington state, according to the Seattle Office of Immigrant and Refugee Affairs (OIRA). Mayor Jenny Durkan, Seattle City Council President M. Lorena González, and other local leaders applauded the decision. “This was the right legal decision but there is still a moral decision that has not been made,” said González in a statement. “We must continue the fight for permanent protections for DACA youth and for all undocumented immigrants living in our neighborhoods.” OIRA director Cuc Vu said in a statement that though the decision is a victory, the Trump administration could still issue an order to end DACA. Those who have previously been granted DACA and remain eligible can still apply to renew. The OIRA has partnered with the King County Bar Association (KCBA) and the Washington Chapter of the American Immigration Lawyers Association (AILA) to offer free online legal consultations for DACA recipients — learn more at: www.seattle.gov/DACA.