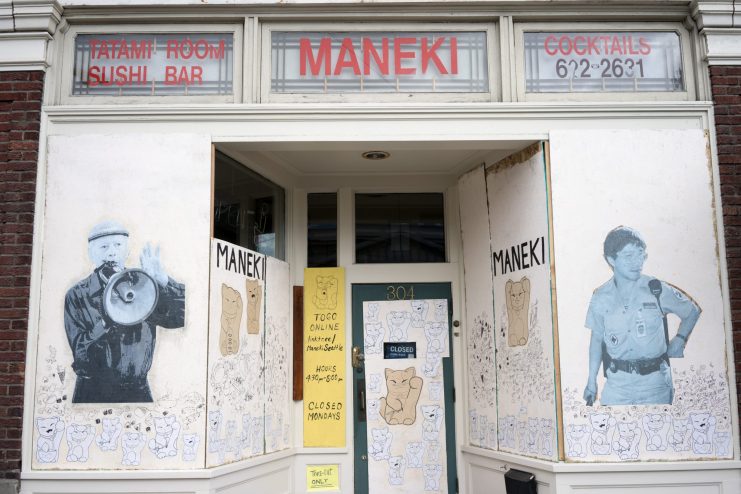 Washington state has been overcounting the number of negative COVID-19 tests for eight weeks, the Seattle Times reported. According to the Times: “The state dashboard has shown 13% more people testing negative since April 21 than actually have, the state Department of Health (DOH) revealed Wednesday.” A state Department of Health spokesperson could not confirm to the Times whether this means the spread of COVID-19 has been worse in Washington.

Marches and demonstrations against racism, police brutality, policing, and for Black lives, continue throughout the city. In the Central District,, 60,000 people marched silently, the South Seattle Emerald reported. A Seattle Children’s March in south Seattle brought 3,000 children and adults marching to demand an end to to police brutality, anti-Blackness, and systemic racism, the Emerald reported.

So far, citywide protests against police brutality that began May 30 have not greatly contributed to spreading COVID-19, Crosscut reported — though it is still too soon to tell what the impact might be. The lack of a rise in infections caused the City to change its recommendations for who should get tested. Previously, the City recommended anyone who attended demonstrations get tested. Now, the City is recommending testing for people with COVID-19 symptoms, or those exposed to people with COVID-19.

The City is recommending people get tested if they experience COVID-19 symptoms. New Citywide testing sites are located in north and south Seattle and operate Monday to Saturday from 10:00 a.m. to 3:30 p.m. The site accepts drive-through clients who book ahead through the website. To get tested, you will need a photo ID with your date of birth. Testing is available regardless of your citizenship/immigration status. You do not need to have insurance or a doctor’s note to schedule a test, and you will not be charged for the test. If you have insurance, bring your insurance card. More information is available here.

King County has expanded its testing sites. Some require insurance. A list of COVID-19 testing locations is here, and you can view a map you of testing sites in King County here. Free language interpretation is available at all locations.

On June 14, regional artist Che Sehyun organized a CID mural art walk. Look out for more coverage of murals around the CID in the International Examiner soon.

This year would have been the 45th annual pig roast at the Danny Woo Community Garden, but because of the pandemic, InterIm CDA has decided to cancel. The huge gathering of community elders wouldn’t be safe, says Danny Woo garden manager Lizzy Baskerville. While organizers think of potential alternatives to the pig roast, they’re also remembering what the event has meant for the community over the last 45 years. Read the full story by IE contributor Claudia Yaw here.

Mayor Jenny Durkan extended the small business and non-profit eviction moratorium to August 1. Until that date, landlords cannot evict small businesses and nonprofit organizations for non-payment of rent, cannot charge late fees, interest or other charges due to late payment of rent, and are directed to work with tenants to enter into a payment plan.

Councilmember Teresa Mosqueda, who represents the city at large, introduced a new big business tax proposal to fund COVID-19 relief efforts the South Seattle Emerald reported. City Council is now weighing two such big business taxes: Mosqueda’s and a plan introduced at the beginning of April by Councilmembers Tammy Morales (District 2, southeast Seattle) and Kshama Sawant (District 3, central Seattle). Mosqueda’s legislation would also tax businesses that spend $7 million or more on payroll, but unlike Morales’s and Sawant’s legislation, companies would be taxed on salaries over $150,000 per year, and would pay a higher rate for higher salary brackets. Mosqueda’s bill would invest $86 million in targeted COVID-relief in 2020 (initially borrowed from City reserves and then replenished), would support City investments that would ordinarily be cut due to COVID-19 2021. The tax would be collected in 2022, and that year would spend $200 million each year on affordable housing, small business support and equitable development efforts, until it expires in 2030. Morales’s and Sawant’s proposal, which raises $500 million per year for emergency COVID-19 payments for low income people, affordable housing, and Green New Deal measures is also back on the table after it was temporarily suspended by Council President González for procedural reasons that no longer apply.

The Supreme Court ruled on June 18 that DACA, or the Deferred Action for Childhood Arrivals Program, could remain, deciding that the Trump administration had failed to give an adequate justification for ending the Obama-era program that allowed teens and young adults brought to the U.S. as children — but who lack legal status — the chance to study and work without fear of deportation. Approximately 16,200 immigrants with DACA reside in Washington state, according to the Seattle Office of Immigrant and Refugee Affairs (OIRA). Mayor Jenny Durkan, Seattle City Council President M. Lorena González, and other local leaders applauded the decision. “This was the right legal decision but there is still a moral decision that has not been made,” said González in a statement. “We must continue the fight for permanent protections for DACA youth and for all undocumented immigrants living in our neighborhoods.” OIRA director Cuc Vu said in a statement that though the decision is a victory, the Trump administration could still issue an order to end DACA. Those who have previously been granted DACA and remain eligible can still apply to renew. The OIRA has partnered with the King County Bar Association (KCBA) and the Washington Chapter of the American Immigration Lawyers Association (AILA) to offer free online legal consultations for DACA recipients — learn more at: www.seattle.gov/DACA.

In a joint project with Crosscut and the South Seattle Emerald, Seattleites reflect on freedom, resistance and joy to honor Juneteenth, the day liberation finally arrived for enslaved African Americans in Texas, over two years after Emancipation. You can read the pieces here.

Drag performer and activist extraordinaire Aleksa Manila shares a message to Seattle, amidst COVID-19, a pivotal moment for #BlackLivesMatter, Pride month, Philippines Independence Day 2020, and her own birthday: “For anyone out there who’s been told to shut up, to be quiet and stay silent: Scream and shout as loud as you can, because you matter and you are special. And for any LGBTQ person out there that’s been told you may be too political, well guess what: Being LGBTQ is political.”