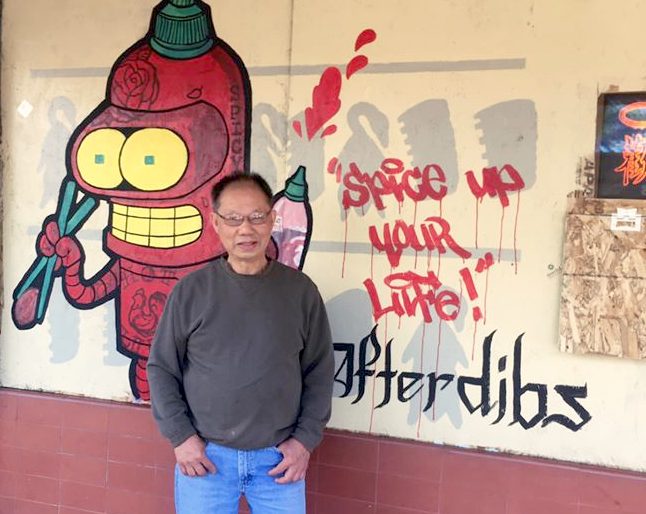 With the help of volunteers and artists, businesses in the Chinatown-ID are recovering from vandalism suffered on May 30 and 31. Citizen journalist Omari Salisbury and others say police did not intervene as vandals smashed neighborhood businesses; a department spokesperson says police resources were stretched during the vandalism in the CID. According to Valerie Tran of Friends of Little Saigon, the damage is a set back for the neighborhood, which has suffered under the COVID-19 pandemic. Read more about this here.

On Friday, June 5, artists, community activists and others gathered with paint and paint supplies in Hing Hay Park and worked throughout the CID to paint murals on the boarded up windows of the neighborhood businesses. The effort was spearheaded by regional artist Che Sehyun who collaborated with others in the community to raise funds for supplies, secure supply donations from Home Depot and bring the community together to paint an estimated 100 murals.

In this video, Matt Chan documents the mural work of artists in the CID, who have been painting the outside of boarded-up businesses after several businesses were vandalized:

Demonstrations against racism and police brutality continue throughout the city. On the evening of June 9, demonstrators marched to City Hall, calling for Mayor Jenny Durkan to resign and for the police to be de-funded. Demonstrators opened the doors and filled the space, and listened to speeches by Councilmember Kshama Sawant and local activists before leaving, the South Seattle Emerald reported.

On Capitol Hill, demonstrators have created a new space, ten blocks large, after police surrendered their blockade of the East Precinct. The Capitol Hill Autonomous Zone (or “Free Capitol Hill”) has its own Wikipedia page, and has become a zone of “mutual aid,” where people offer each other food, supplies and medical care, Crosscut reported. People associated with  Free Capitol Hill also released a list of demands, including abolishing the police, an end to youth and private jails, re-trials of people of color serving a sentence for violent crime, rent control, free college, mandatory anti-bias training for jobs in education and medicine, and more.

On June 7, thousands rallied in south Seattle for Black lives, led by people on horseback, the South Seattle Emerald reported. Councilmembers Kshama Sawant and Tammy Morales attended the demonstration. “I’ve lived in South Seattle the majority of my life and have never seen this many people in Othello Park,” Marcus Harrison Green, editor of the Emerald, wrote in a tweet. “Black, White, Asian, Muslim,  Jewish, Indigenous, LGBTQ+ chanting #BlackLivesMatter in unison.”

The City is recommending people who attended demonstrations to get tested, and has expanded its testing criteria to include people who attended them (previously, testing was recommended for those experiencing symptoms or in contact with someone who has COVID-19). “While I believe everyone should exercise their right and speak out, we must also remember we’re in the middle of a pandemic,” said Mayor Jenny Durkan in a statement. New Citywide testing sites are located in north and south Seattle and operate Monday to Saturday from 10:00 a.m. to 3:30 p.m. The site accepts drive-through clients who book ahead through the website.

King County has moved into an early phase of re-opening, allowing businesses to re-open in a limited manner in accordance with social distancing and other public health guidelines. The plan, Phase 1.5 of four phases, allows restaurants to operate at 25 percent capacity (and 50 percent for outdoor dining), and non-essential retail businesses can re-open at limited capacity. Other businesses, such as barbers, nail salons and tattoo parlors, as well as professional services like accountants, attorneys and insurance agents, can also re-open at 25 percent capacity.

Seattle Channel’s General Manager Shannon Gee was inducted into the Silver Circle of the Northwest Chapter of The National Academy of Television Arts and Sciences (NATAS). “The award recognizes Gee’s lasting contributions to the television industry, which include a succession of award-winning documentaries featuring culturally diverse community-driven content,” according to a statement from the Seattle Channel. Gee started at the Seattle Channel as a contract producer, and helped launch a documentary series called Community Stories, which highlighted Seattle’s diverse communities. She also directed One Generation’s Time: The Legacy of Silme Domingo and Gene Viernes, a documentary about the 1981 murders of the two Filipino American labor activists. The International Examiner honored Gee in September 2019 during our annual Community Voice Awards. You can read a profile of Gee here, in advance of that award.

DA LI Development USA (a residential and commercial real estate developer building the Koda condominiums project) and Uwajimaya, Inc delivered 7,100 protective masks to organizations in the CID and beyond, including ICHS, Nikkei Manor, Kawabe Memorial House, the Denise Louie Education Center, Seniors in Action Foundation and SCIDpda. “We continued to be heartened to see our neighbors, agencies, and businesses coming together to support each other, small businesses, and those who are more susceptible with the COVID-19 pandemic. Thus, this is our way of doing our part and contribute to the wider community relief and recovery efforts,” said Tomio Moriguchi, former CEO, Uwajimaya, Inc., in a statement.