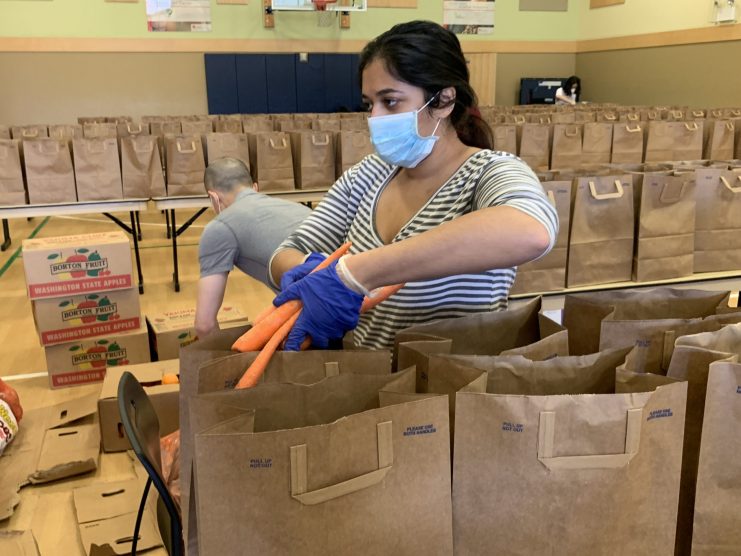 As of April 28, there are 14,070 confirmed COVID-19 cases in Washington state, including 801 deaths, according to the state Department of Health, the Seattle Times reported.

The Asian Counseling and Referral Service (ACRS) food bank in the CID has long provided groceries directly to community members, who could walk in and be served. As COVID-19 makes it less safe for people to gather in the small food bank space, ACRS is adapting by shifting to a delivery model. For the last few weeks, ACRS has distributed 1300 to 1500 bags of food to community members throughout King County. Challenges remain, including possible food shortage from suppliers. ACRS is also approaching the 30th anniversary of Walk for Rice, an event usually held at Seward Park and which raises money for the ACRS food bank and nutrition programs. This year, Walk for Rice is happening online. You can participate through the following link: http://acrs.walkforrice.org/site/TR?fr_id=1130&pg=entry. Look out for a full story soon from the International Examiner about how the ACRS food bank has been adapting during the pandemic

On Monday, the City Council passed a bill that would temporarily suspend in-person meetings of the International Special Review District (ISRD) Board and other design review boards, allowing the Department of Neighborhoods to approve some minor changes in the neighborhood directly, without the ISRD Board. The goal of the bill is to allow construction projects to continue during the COVID-19 pandemic, and give the City time to set up design review meetings virtually. However, due to an amendment to the bill from Councilmember Tammy Morales (who represents the CID and much of southeast Seattle), the ISRD Board will not hold virtual meetings, and the list of changes that can be approved by the Department of Neighborhoods will be limited to relatively minor changes to signs and exteriors of buildings (the list of such changes can be found in the amendment). While design review, including in historic districts like the CID, normally requires public meetings and opportunities for public comment, Gov. Jay Inslee’s stay-at-home order makes in-person public meetings impossible. The temporary bill was intended to streamline housing development until the City finds a way to hold virtual design review meetings, a potentially complex task requiring training staff and volunteer board members and finding ways for the public to participate. The ISRD process is an exception, following Councilmember Morales’ amendment. Morales heard concerns from stakeholders in the CID, including InterIm Community Development Association, that virtual meetings would make it harder for community members to participate in public comment. “This is about allowing the neighbors who actually have to live with these decisions to have their opportunity to comment,” Morales said in an interview on Wednesday. “What I heard from many constituents was that they were fine with waiting for ISRD meetings to happen until it is safe to come back and gather.” Look out for a full story about this bill and its impact on the ISRD in the International Examiner soon.

Today, March 30, is National Bubble Tea day! Friends of Little Saigon shared the story of Young Tea on Facebook, one of the recipients of the CID Restaurants and other Small Businesses Relief Fund co-managed by the Seattle Chinatown International District Preservation and Development Authority (SCIDpda), the CID Business Improvement Area (CIDBIA), and Friends of Little Saigon

There’s just one more day left to help name a new park in Little Saigon. The park will be at 1224 South King St, across from Lam’s Seafood, and the City is seeking ideas for naming it, and is accepting input until May 1. Names can include geographical location, historical or cultural significance, natural or geological features, or may be named after a person deceased for three years or longer who made a significant contribution to parks and/or recreation. To submit a name, send an email to [email protected] and include your recommended name, as well as an explanation of how the name meets the previous criteria.

Scammers have been targeting small businesses owned by immigrants and refugees, taking advantage of the fact that many are affected by the COVID-19 pandemic. The scammers have been calling and posing as lenders and offering to help businesses with their federal Small Business Administration (SBA) loan applications, according to the Seattle Office of Economic Development (OED). “If you are contacted by someone promising to get approval of your SBA loan in exchange for payment up front or by someone offering a high interest rate on a small business loan, you should suspect fraud,” according to a statement from the City. There is no fee in applying for SBA loans. If contacted by a scammer, OED recommends businesses report scams to the Washington State Office of Attorney General, by calling 1-800-551-4636 from Monday to Friday 10 AM to 3 PM or completing a claim at: https://fortress.wa.gov/atg/formhandler/ago/ComplaintForm.aspx. For those interested in learning more about how they can protect their small business from scams, the Ethnic Chamber of Commerce Coalition is hosting a virtual session on May 1 with Ethan Via, FBI Supervisory Special Agent of the White-Collar Crime Squad in Seattle. He will be sharing best practices and tips for how to protect yourself from scams during the COVID-19 pandemic. Spots are limited. You can register through the following link: https://forms.gle/79gy9yChc94xsm5L8

Seattle set an emergency order April 24 instituting a 15 percent cap on the commissions that third party apps can take from restaurants for delivery services, the Seattle Times reported. During the COVID-19 pandemic, many restaurants have been offering delivery, including on apps such as UberEats and Postmates, which have been charging high commissions on orders. Geo Quibuyen and Chera Amlag, owners of Hood Famous Cafe + Bar, stopped using delivery apps after they started charging 30 percent commissions on orders, and started delivering orders themselves, they told the Seattle Times.

The Japanese American Citizens League (JACL) is mourning the loss of Lillian Kimura to COVID-19. Kimura was the first woman to be elected as JACL National president. “Kimura was a tireless advocate for civil rights,” reads a statement from JACL. “The year of her election heralded JACL resolutions condemning sexual harassment, supporting family leave, and supporting a woman’s right to choose abortion. Over the next two years, JACL increasingly supported gay rights including the right to serve in the military, culminating in a 1994 resolution supporting gay marriage.” According to Karen Narasaki, former President and Executive Director of AAJC: “Lillian was a force of nature. She became JACL National President at a time when few women had broken through the glass ceiling to lead national civil rights organizations.”

After President Trump signed an executive order implementing a 60-day ban on immigrants seeking to live and work permanently in the US, local immigrant advocacy organizations spoke about the impacts of the ban with the South Seattle Emerald. Rich Stolz, executive director of OneAmerica, said the ban could impact Seattle immigrants waiting to be reunited with loved ones. Malou Chávez, staff attorney for the Northwest Immigrants Rights Project, said the ban would make it harder for immigrants to become U.S. citizens, and worried about a possible increase in deportations. Health professionals on immigrant visas are exempt from the ban, as are spouses and underage children of U.S. citizens, H2-A visa holders, and others. When it was announced last week, Trump’s decision was condemned by local officials including Mayor Jenny Durkan, Congresswoman Pramila Jayapal, King County Executive Constantine, and Seattle City Council President Lorena González.

To commemorate the 45th anniversary of the war in Vietnam, the South Seattle Emerald shared stories and perspectives from two distinguished local Vietnamese Americans. Julie Pham, PhD, and author of Their War: The Perspectives of the South Vietnamese Military in the Words of Veteran-Émigrés, wrote a piece entitled “‘Lessons Learned’ hide the South Vietnamese Perspective.” Joe Nguyen, Washington State Senator for the 34th district and the first Vietnamese American to serve in the State Senate wrote a piece entitled “45 Years after the Fall of Saigon: A Coming of Age.”

The Seattle Times has a profile piece about theater artist and activist Sara Porkalob as she prepares to star in the Broadway revival of “1776.” Porkalob spoke about her family, developing her craft in Seattle’s arts and theater scene, and why the CID neighborhood is meaningful for her.