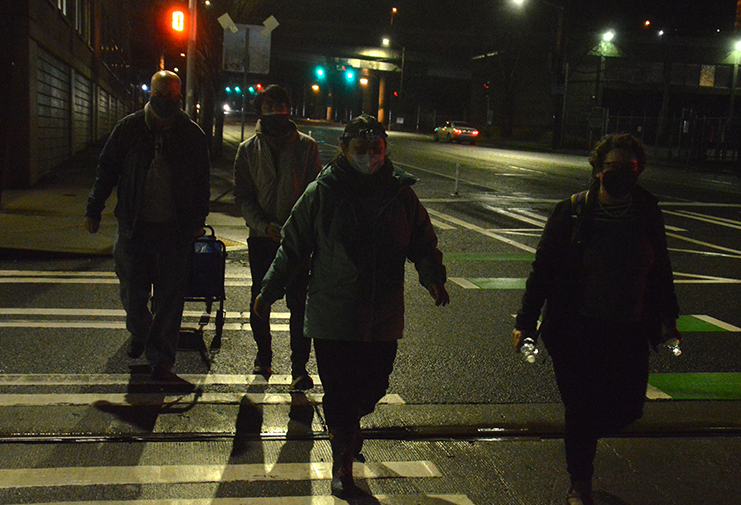 Approaching tents under the I-5 underpass and elsewhere in the neighborhood, they offered the supplies to people sleeping outside. Some asked if the group had medical supplies or sleeping bags (they did not). By the end of the night, most supplies were distributed.

CID Community Watch was started in June 2020 by Matthew Toles, shortly after vandals smashed their way through several businesses in the CID during protests against racism and police brutality.

At the time, “Chinatown was quiet, it was dead, there was no one around, and so there were a lot of crimes like theft and burglaries and window breakages,” said Tanya Woo, a co-founder of the group who serves as a volunteer leader.

Since it began, the group has adapted its approach according to need, Woo said. In spring of 2021, anti-Asian hate incidents drew new attention. Learning that many seniors in the neighborhood felt too unsafe to talk around the neighborhood, members of the group walked with them, and made sure people knew how to report incidents.

The group recently received a grant to teach self defense workshops for seniors and situational awareness. The workshops will likely happen in April due to the Omicron variant, Woo said.

Seeing the large unhoused population in the neighborhood – particularly a large encampment that used to exist on King Street, the group felt it could make a direct impact by handing out supplies to people living outside, said Vue.

With unhoused people facing heat waves and smoke in the air in the summer, the group handed out sandwiches, ice and Gatorade with electrolytes. In the winter, they gave out warm supplies, hot chocolate and steaming cups of ramen.

“A typical night is basically walk around, give out what we can to the unhoused people that are here,” said Vue. “Public safety is still very much a theme we stand by. When we have the capacity we are keeping an eye out on our walks.”

If people need help the group can’t provide, they will tell them where they can find outreach workers during the day.

Public safety challenges in the neighborhood continue to worry residents and business owners.

Businesses are getting windows smashed – which is costly to repair. Even when businesses advertise that there’s cash on the premises, business owners believe thieves steal items to resell, according to Woo. In November the Seattle Times reported that Hue Ky Mi Gia and Seven Stars Pepper Szechwan Restaurant in Little Saigon were on the verge of closing because the area felt unsafe due to shootings, drug use, break-ins, and a market in possible stolen goods.

In a statement to the International Examiner, Mayor Bruce Harrell said small businesses in the CID “are suffering – not just because of the criminal activity and frequent break-ins, lack of sanitation, and trash and litter – but also because these very real issues drive visitors, customers, and longtime residents away.”

The City “needs to do our part to reduce public safety concerns, address the homelessness crisis and activate and clean up streets,” Harrell said. This includes increasing police staffing to deter and investigate crime, as well as deploying people who can respond to addiction and mental health crises and connect people with resources.

“We have to address homelessness now, closing unsafe and unsanitary encampments by providing residents with the housing and services needed to get back on their feet,” Harrell said.

Harrell added: “I’m both inspired and impressed by the resilience and strength of this community. In the face of so many challenges – a pandemic and its effect on the economy; rising bigotry, hate, and violence; challenging growth and increasing housing costs – the community has stood strong.”

CID Community Watch doesn’t see itself as an alternative to the police, but hopes to fill gaps in service. Members have trained in de-escalation and first aid, and the leads carry Narcan.

The group avoids calling police on its walks except as a last resort. “We’ve noticed that having police involved does hurt more than help, or they take a long time to come, and if there’s a big fist fight, the fist fight is probably going to solve itself,” said Vue.

Vue and Woo said they feel relatively safe on the walks. “I’ve not come across anything that was really scary,” said Woo. Someone once tried to punch her, and once a volunteer got hit. A few times, someone claimed to have a gun, and volunteers warned people in the area to stay clear.

The group usually avoids Little Saigon unless there are six or more volunteers present, and skirts the open air market at 12th and Jackson entirely. Volunteers have walked through without a problem in the past, but Vue and Woo don’t want to impose the risk of violence on anyone.

The perception that the neighborhood is unsafe may be enough to drive away visitors, Vue said. “Unfortunately we know we cannot solve everything,” she said. “We are barely a bandaid.” She hopes neighborhood organizations and city government can come together to solve the problems, without vilifying unhoused people. Hostility to unhoused people is the most difficult thing about the group’s work, Vue said. The group has been criticized on social media for handing out supplies to people living outside, but Vue doesn’t think giving someone a bag of chips to someone living outside is enabling them.

Some new ideas on the group’s radar include day-time activities and cleanups.

Volunteer Kevin Shum joined the group when incidents of hate against Asian Americans were receiving greater visibility. Shum lives in Belltown but often comes to the neighborhood. “I love the small little community that we have here together,” he said. “Whatever small part we do to keep businesses running and the community happy and well, that’s all we can do.”

Monica Cowdery lives in the CID and became involved at the end of 2021. “It’s really awesome to see a group doing this,” she said. “Creating a sense of interconnectedness and trust within one another I think is very meaningful.”

Woo said she doesn’t know what the solutions are for the multiple public safety challenges in the neighborhood. She hopes the group’s legacy is creating a sense of community, and opening communication channels. She remembers a time when members of the group on Facebook reported a fight happening in Hing Hay Park, and residents who saw the post rushed out of their apartments to de-escalate it.

“It’s just been amazing what the power of community has brought together and taught, even despite all our differences,” she said.