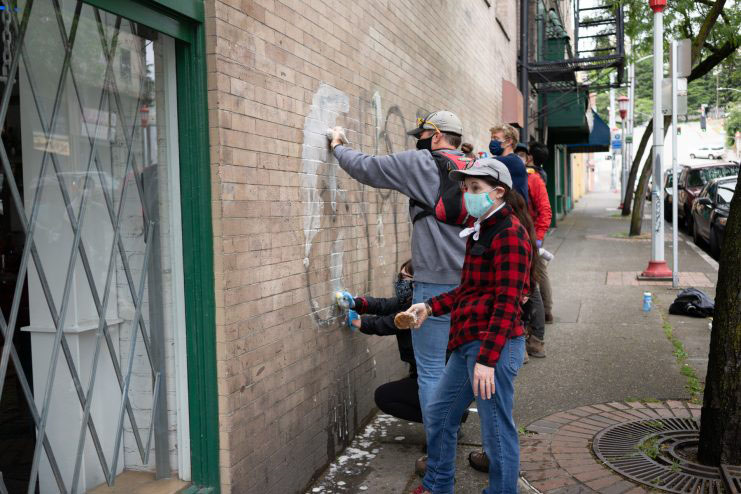 When Tanya Woo sees people tagging buildings in the Chinatown International District with graffiti, it makes her angry enough to risk confronting them — even though she’s seen that they’re sometimes armed with weapons, or could turn their spray cans on her.

“It makes me very angry,” she said. “It’s destructive — mentally, physically, financially, to the community.”

“These businesses are suffering, these are mom and pop shops. It’s very sad,” she continued. “People are defacing property, and putting their names, basically, on a historic district and on people’s homes.”

Woo is one of the leaders of the volunteer CID Community Watch, a group which patrols the neighborhood at night to keep eyes on the streets for public safety. It formed after vandals smashed over a dozen businesses in the CID over the summer.

Woo also knows how challenging it is to remove graffiti from the many historic brick buildings in the neighborhood. Her family owns the historic Louisa Hotel. When she was overseeing its transformation into new affordable housing and retail after a destructive fire, taggers would spray graffiti on its exterior and also break in and tag the interiors.

“Chinatown-ID has always been like this interesting neighborhood that people want to tag,” said Monisha Singh, executive director of the Chinatown International District Business Improvement Area (CIDBIA). “I don’t quite know why that is.”

While graffiti has been present in the neighborhood for decades, Woo said it has gotten worse — and unlike before, people are freely spraying tags over murals and art.

“When COVID happened it just kind of exploded. It was just everywhere, it was constant, non-stop,” Woo said. During the pandemic, it seems, ‘there are no rules, there are no bounds.”

When the neighborhood came together to board up the windows of businesses to protect them, and festoon the board with public art, taggers still came by to leave their mark.

Singh believes graffiti has worsened because fewer people are coming into the neighborhood to work, visit or shop. “We just don’t have as many eyes as we used to.”

The CIDBIA contracts with Seattle Surface Cleaners to clean graffiti on properties from the ground up to eight feet multiple times a week.

When Seattle Public Utilities identifies graffiti on a property, it will send the owner a notice asking that they remove it within ten days, according to the city’s Graffiti Nuisance Ordinance.

Normally, if the graffiti is not removed, property owners will then be given a notice of civil violation and are asked to appear before the City’s Hearing Examiner, who may fine them up to $100 dollars per day, with a maximum of $5,000 dollars.

Due to the pandemic, as of March 2020 SPU has temporarily suspended enforcement of this ordinance for private properties and businesses, including fines, according to Sabrina Register, public information officer for SPU, in an email. But the City is still formally sending letters of notice to property owners about graffiti on their property.

“SPU works to avoid imposing fines and penalties, and only imposes them if a property refuses to abate the graffiti,” Register said in an email.

But the costs of solvent to remove graffiti, plus primer to cover it up, and the labor required, is out of reach for many businesses, Singh said. Plus, both solvent and primer have trouble sticking to wet surfaces, which presents a problem in the winter. The BIA has to scale down its graffiti removal during this time.

Almost all the buildings in the CID are brick and mortar buildings over 100 years old, which require careful treatment, said Woo.

“The brick is legacy of our ancestors and from those who came before us,” Woo said. “They tell a story of all the hardships that they had to overcome for us to be here. And this graffiti is destroying that legacy, because when you spray paint on historic brick, you just can’t remove it — you’re removing brick, you’re removing mortar.”

According to Register with SPU, the department “does not impose fines or penalties for buildings that qualify for historic landmarks.” That said, several historic brick buildings in the neighborhood do not fall within the Seattle Chinatown Historic District recognized in the National Register of Historic Places.

Some buildings have paid for anti-graffiti coating on their first floors, Woo said — but it must be applied annually and is expensive. And buildings that have received tax credits for historic preservation can’t apply it for 10 years. While the Wing Luke Museum can, for example, the Louisa Hotel simply can’t yet.

From a business point of view: “Sometimes it costs more to remove graffiti, and the rate at which it’s happening, it could just come back in a few days, and it’s just money down the drain,” Singh said.

Even for the CIDBIA, graffiti is being laid on faster than it can be cleaned up, Singh said.

While the CIDBIA offers cleaning services for roughly the first floor of most buildings, cleaning above this is considerably more complicated and expensive, Singh said. As a result, graffiti is perpetually visible high up in the CID, looming in sight for people driving on I-5.

“It creates a perception of this neighborhood as being either abandoned or unsafe, or just not properly maintained,” Singh said.

While SPU is not fining businesses for graffiti at the moment, Singh believes the practice is unfair. “I think the whole notion behind the victim having to do the work to rectify the situation when they are the victim is not right,” she said.

The CIDBIA asked SPU to change the way it communicates with businesses. Sometimes, SPU graffiti rangers will send a notice to a property or business owner, and the language can sound aggressive, or not be translated from English, Singh said. “It creates a kind of panic in our businesses.”

SPU updated the language in its graffiti enforcement notifications in the last two years, Register said in an email.

Though property owners, not business tenants, are responsible for graffiti, “If a restaurant gets it, for example, they have this idea that they have to clean it up,” Singh said.

This year, the CIDBIA will be receiving $52,000 from the City for education and outreach, graffiti abatement, translation services, and graffiti removal services.

Historically, graffiti has been linked to early hip hop culture, and graffiti artists have come from a variety of ethnic backgrounds. But in Woo’s experience, taggers in the CID seem to be young people who are white and not residents or workers in the CID community.

Some taggers take pictures of their tags in the CID and post them online, Woo said.

Leaders of the CID Community Watch have different approaches for when they see taggers, said Woo.

At first, when members of the CID Community Watch came across taggers, they tried inviting them to participate in painting murals to go on businesses over the summer, but it was ineffective, Woo said. Some of the same taggers were found tagging the neighborhood again. Now, community watch leaders will usually ask taggers to stop and to leave, and try to explain to them how graffiti hurts the neighborhood and businesses. Usually it works.

But Woo cautioned that this approach is safer in groups. She does not advise individuals, especially seniors or business owners, to confront taggers alone, unless they are at a safe distance or in their car. Reviewing videos and pictures she has taken of taggers, she’s noticed sometime they are armed.

Woo forwards photos and videos of graffiti and taggers to the police, but not much happens as a result, she said.

For herself, with her martial arts training, she doesn’t feel too intimidated confronting taggers about what they’re doing.

“It’s such a beautiful neighborhood, a historic district,” Woo said. “We have so much beautiful art. And then just to see this explosion of graffiti and the tagging, it’s just disheartening.”