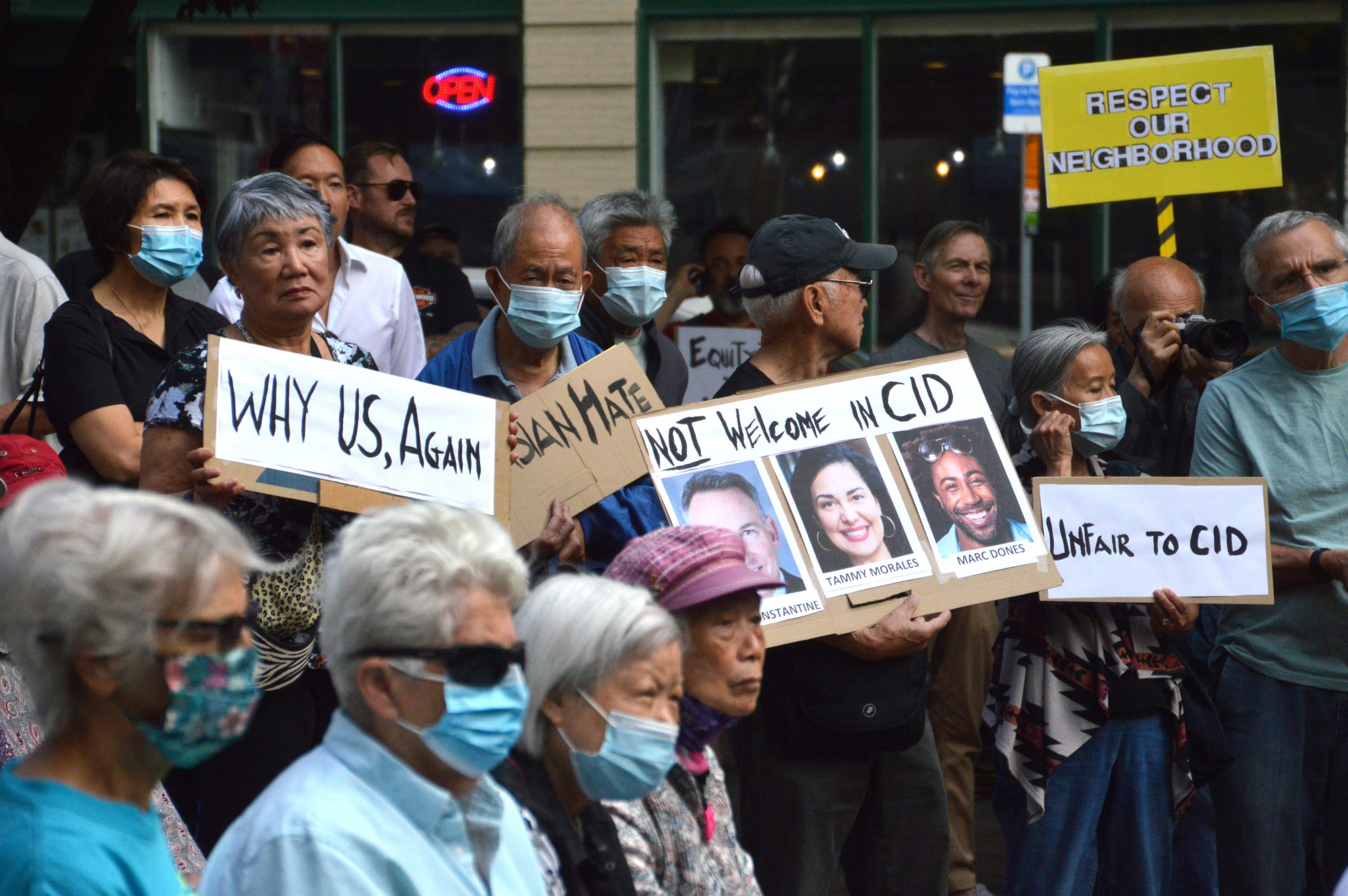 Community members in the Chinatown International District (CID) are raising concerns about a plan to expand shelter and services for people experiencing homelessness in SoDo, just south of the CID neighborhood.

On September 20, community members rallied at Hing Hay Park and walked to City Hall to testify at public comment.

On September 8, about 100 people gathered to speak out about the project. Masked seniors sat in chairs. People held signs saying, “We want our say,” “We need to talk,” and “We demand respect.”

The King County Regional Homelessness Authority, King County, and the City of Seattle are working together to expand a 270-unit shelter in SoDo, adding 150 units of shelter, tiny houses, a 40-person, high acuity behavioral health shelter and other services.

King County announced the plan in March, but rally organizers said there was little to no engagement with the community.

Matt Chan, one of the organizers of the September 8 rally and a former member of the International Special Review District Board, said the neighborhood’s voice was ignored by local government. “All we’re asking for is we need to be heard. We need input here,” Chan said to the gathering. “It’s systemic racism when they don’t ask us.”

Chan stressed that the purpose of the rally was not to blame people who are homeless. “That’s not what this is about,” he said. “Many of us have walked evenings providing mutual aid to the unhoused as well as the seniors in the community.

And to those who would paint the CID as a neighborhood of NIMBYs – which stands for Not In My Back Yard – Chan said: “Let me tell you that our backyard has over 10 shelters within a mile of Chinatown. I don’t know of any other neighborhood that is holding that amount.”

The neighborhood has gone through this many times before, said Tanya Woo, a founder of the volunteer CID Community Watch, including in 2017 when the City placed the Navigation Center in Little Saigon. At the time, the neighborhood decried a lack of engagement and outreach.

King County hopes the new shelter and services will help bring people indoors and allow them to stay, so they won’t have to regularly check out and return at night. The expansion would cost about $66.5 million dollars, according to Executive Down Constantine’s office, and would entail preserving the existing Salvation Army shelter (which would have expired in November) and adding more services. The existing shelter was originally a COVID isolation site the County opened in 2020, and an emergency smoke shelter.

Woo said that the limited outreach local government did was not focused on true community concerns. In a County Council meeting on May 3 to approve the lease for the facility, King County Director of Community and Human Services Leo Flor said the County was doing outreach to the CID regarding the use and design of the site, “but they totally missed the point because we needed to know about the location first and foremost,” said Woo.

Flor agreed the County could have done better with outreach. “I hear the community saying that they need a lot more engagement. And so that’s what we’re going to do,” he said in an interview with the International Examiner.

The rally gave community members an opportunity to share their concerns on the microphone, and several spoke in Cantonese and Toisanese, with an interpreter translating. Community leader Bettie Luke, sister of the late politician Wing Luke, said she wished decision-makers were present so she could speak to them directly. “How dare you think you are serving our community? How dare you think you will choose one disenfranchised group and hurt another one in the aftermath?” she said.

Bringing more shelter residents near the neighborhood will be “destructive,” Luke continued. “It will tear apart the safety that the residents here used to feel. It will endanger businesses, because people will avoid shopping and going to restaurants because [it will be] flooded with a homeless population.”

Nora Chan, a neighborhood resident and founder of Seniors in Action, echoed the concerns about public safety. Without a strong plan to protect public safety, the cultural heritage of the neighborhood will disappear, she said. The presence of the Navigation Center and other nearby shelters already results in public safety problems, Chan said.

We know that there’s a need for the shelters,” Chan said through an interpreter. “But we hope the government, particularly the King County government, would consider putting them in some other communities, not here.”

Beth Ku said crime has been increasing since the Navigation Center was placed in the neighborhood, causing businesses to suffer, garbage and needles to pile up, and seniors to fear for their safety. “We’re not against the homeless but then indeed crime is always on the rise,” she said through an interpreter. Adding to the problem, when people call 911, often the police will only write a report and not follow up. “It’s as though in Chinatown-ID these days we don’t have sunshine anymore. It’s as though we don’t have tomorrow.”

In an email, Woo said community members are not concerned about unhoused people, but instead “It’s the people who prey on them. The drug dealers who go where their clients are, the prostitution and open air markets.”

Flor said he has heard people’s concerns that crime would increase as a result of the shelter expansion. “I think everyone agrees that people experiencing homelessness are not dangerous, and are not something or people that we should fear. They are members of our community,” Flor said. “I think a lot of the work ahead is understanding what is causing people in the community to feel unsafe right now,” he continued. “So that when the shelter expansion comes online, we can open it in a way that helps people feel more safe.”

For example, Flor said, the expansion will include a high-acuity shelter specifically for people with higher level behavioral health needs, so that if they need to leave an existing shelter, they have a place to go to receive treatment. Other ideas include lighting, fencing, and security staff at the shelter.

“I think one of the best things you can do to help somebody be safe is to bring them inside,” Flor said. “I haven’t met a person who hasn’t come across somebody in the street who was obviously in behavioral health crisis and just felt really hopeless because they didn’t know what to do, or where they might be able to go and I think a behavioral health shelter can help with that.” The same is true of the proposal to move a 60 unit sobering center to the site and allow it to operate 24/7,so that people who are experiencing public intoxication from alcohol or drugs can go to sober up, Flor said.

Flor said that expanded shelter services won’t be added to the site until the end of 2022 at the earliest, which gives the County months to do more outreach and the community time to weigh in on certain decisions – such as whether RVs will be at the site.

“I want to hear anything that a member of the community proposes would make the site successful and fit into the community,” Flor said. “And I don’t want to even pretend to be able to predict what all of those are. I want to have open ears and an open heart for it.”

However, Flor said no amount of community input could convince the County to abandon the expansion altogether. “We have leased the site,” he said. “We believe it was important to lease that site so as not to lose that 270-person shelter.”

Near the end of the rally, most of the group, including seniors, marched to the site of the Salvation Army in SoDo. Woo said she wanted people to understand the size of the site and its proximity to the neighbor-hood. The plan was to look across the street, but some of the seniors wanted to see it closer. Many looked with curiosity at the shelter and surrounding area, where a few people sat in front of the entrance.

One of the last speakers, community activist JM Wong, noted that homelessness is connected to high housing prices, and that people on the streets may use drugs to cope with the trauma they experience.

Wong called for more resources and services for the neighborhood, and for more young people to patrol and promote public safety for seniors and residents. “Let’s take care of our unhoused neighbors so they won’t also have to be in dangerous situations and let’s make the government pay for all of that because that’s on them,” Wong said. “We should be holding them accountable to protect our elders to protect this neighborhood. And also to protect the well being of the unhoused neighbors who live here. They already live here whether people want them to or not.”