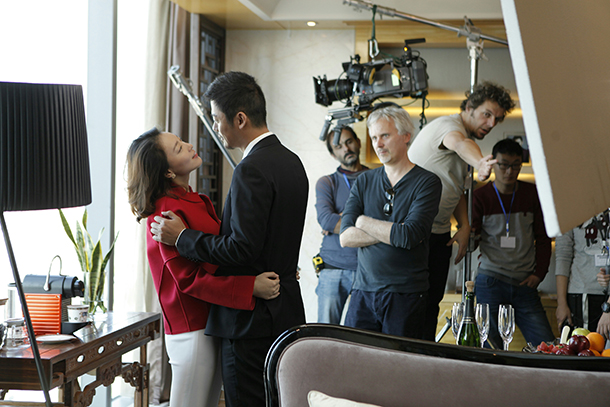 The first Chinese-Italian co-production film recently premiered in Beijing to a venue full of film industry veterans and critics.

The movie, entitled Coffee, tells three stories from very different parts of the world: China, Italy and Belgium. Although the characters in each storyline face crises unique to their location, they are all tied together by the global themes of their struggles. It is a notable contribution to China’s growing and maturing film market, which has seen a steady increase over the past five years in genre and content diversity.

“It has a special meaning for all of us, because it is the first time there is a film representing [China] and Italy that has the Dragon Seal [the official seal from the government that shows up on the screen at the beginning of a film signifying that it has passed the censors and can be distributed],“ said the film’s director, Cristiano Bortone. “It’s interesting [to create content] for the Chinese audience to watch that cross bridges between our two cultures and markets. I sense a lot of curiosity and also, I have to say, appreciation.”

At the same time as when work began on Coffee three years ago, Bortone founded the organization Bridging the Dragon, which has the express purpose of working toward cultural cooperation in telling stories through film. Bortone has been back and forth to China for quite some time; he teaches courses at the Beijing Film Academy, has learned some Chinese language, and directed the Chinese locally released film Red Like the Sky. All of which has helped him to become acquainted with Chinese arts and culture.

This year, Bridging the Dragon has a lab with twelve projects, all of which focus on telling stories that can be consumed by a Chinese audience, but that have international aspects.

It is the global commonality expressed in Coffee, a film about the environment, that attracted the film’s Chinese partner, Cai Gongming, founder of Road Pictures, to the project.

“This film won’t get large distribution but was personally interesting to me, with its having a large focus on the environment,” says Cai. “We are living in one world, and the world is fragile, and we need to protect it, and I think this message is exactly what we want to send.”

Cai says his team has seen firsthand how co-productions can be challenging, and that the industry as a whole has cooled on them, after recent larger-budget projects didn’t see the success producers had hoped for.

“In the beginning, co-production attracted a lot of attention, and a lot of money,” says Cai, “but then people would see that it is very challenging and the success is not there, and now they’re not going away, but they have a questionable attitude toward it.”

But for Cai’s company, lack of success for the large-budget U.S.-China co-productions is just a setback in a learning process.

“The reason why we continue to believe in co-productions, even knowing all of these challenges, knowing the cultural difference, the market difference and so on, is because we want to make good movies with international content,” Cai says. “Let’s say Coffee, the story is about a global world, and that is naturally a co-production.”

As an example, Cai points to one of the movies on their slate, The Diamond Age, which is an adaptation of Neal Stephenson’s 1995 best-selling science fiction novel about how technology affects the world in the future.

“This is more authentic to make, rather than wanting to ‘cook’ a co-production, and that’s the reason why we believe in these kind of projects,” says Cai, referring to when producers try to plan a movie with the goal of it being a co-production, because they want to make a project that can sell and make money in more than one market, rather than a project becoming an international production in an organic way because it needs international crew to meet what the story needs to come to life.

Bortone said that throughout the process of producing Coffee, whether working with Chinese partners, casting and directing actors in Chinese, assembling a Chinese crew, or “from going through the motions of censorship which is always a big issue for all of us with fears of ‘oh my god, they’re going to rip my script apart,’” to finding a solution, he learned a lot. And while all of these aspects were challenging, he says it “felt like breaking the ice, like pioneering and doing something that very little has been done of before, which will lead inevitably to more projects.”

“On a general level, I’m very optimistic,” says Bortone “What’s happening here. . . it’s like Europe in the 60’s, there was a lot of enthusiasm about financing, and naivety too, but we are learning by making mistakes. Chinese people as they travel, they go and then they come home and they want to drink the same French wine, Italian pasta, maple syrup from Canada, our cultures are merging, and there is curiosity between the cultures.”

Many people in the U.S. probably heard about the controversy around the film Great Wall; Asian American talents such as Constance Wu were vocal in saying that projects like these are a part of the “white-washing” problem in the American film and TV industry.

While there are several aspects within the TV and film industry that could see vast improvement in terms of representation, Great Wall perhaps was misunderstood on a domestic level. Would the same people saying Matt Damon being in a film surrounded by a Chinese cast is inappropriate have otherwise known about any Chinese films that came out that year? Do they know who the famous director Zhang Yimou is? Are they familiar with any of the other very talented Chinese actors who were cast in the film?

In the past couple of years there have been some glaring examples of Asian characters being replaced by actors of other ethnicities, but inclusion of actors who are not Han Chinese is scarce in the Chinese domestic market, so for Chinese financiers to attract an internationally renowned talent such as Damon to come and be in a film in China was viewed as a “win” in the potential for international growth and reach of Chinese films. Whether the film was good or worth the level of investment put into it is a different matter.

“At least they tried,” says Cai of Great Wall.

Now, with Coffee under his belt, Cai says he sees room for more European co-operations, and that at the same time, Hollywood hasn’t diminished; there is just more room in general for diverse content.

Additionally, the presence of more Asian faces in international film will inevitably be reflected with an increased presence of Asian faces across the globe at a domestic level, says Bortone.

“Italy is a very provincial country, as are many in Europe, but I think many people will be in for a rude awakening,” he says. “There are now also several Chinese people born in Europe making production companies, and we see more and more involvement by Chinese people in our economies.”

“I would say right now there is more of a curiosity by the Chinese about Europe than Europe about China, so far, but it will get there. So we will get used to their stars, and their filmmakers – the world is getting smaller. With this context, there will be more and more space for movies like Coffee. There’s a shift and a whole generation of young Chinese who require more special content.  If I can be a little drop of this process, I’m very happy.”