The 11th annual Seattle Children’s Film Festival will showcase movies from 29 Asian countries, as well as several directed by Asian Canadians and Asian Americans. Among them are two feature narratives about animals and the children that love them. Although that combo is always a winning formula, these two films are anything but formulaic.

Celestial Camel takes place in the arid steppes of Kalmyk where life can be harsh. Rain has been sorely lacking and one family of sheepherders is in dire need of it. But when their female camel, Mara, gives birth to a completely white colt born under a camel-shaped cloud, Bayir, the family’s oldest son, is ecstatic. Remembering what his late grandfather taught him about the magical powers of a “celestial camel,” the teenager is certain much-needed rain will soon bless them.

Unfortunately, Bayir’s father has other ideas. With three children and another on the way, he decides to sell the baby camel to a Russian film producer who lost his in a stunt gone wrong. No matter how much Bayir cajoles his father, the baby camel, Altynka, is carted away, his heartbreaking cries echoing throughout the vast plains. But no one has predicted the steely resolve of Altynka’s mother, Mara, in getting back her baby. Galloping away into the parched steppes, she bleats for the child ripped away from her. Realizing that losing Mara means losing their livelihood (camels locate water for the sheep to drink), Bayir doesn’t hesitate to go after her.

As Bayir’s mother goes into labor and his father drives her miles away to the doctor, Bayir abandons his younger brother and sister, hops onto his father’s old motorcycle and chases after Mara, and by default, Altynka. Along the way he meets a shaman chanting for rain, some villagers who invite him to a community folk dance, a lama studying to be a priest, and an orphan boy, Quarter, who’s a petrol thief.

An emotionally-driven tale, Celestial Camel not only proves the deep love animals feel for each other, but for their human caretakers, too. The fascinating Kalmyk culture is prominently featured in scenes like Bayir’s parents communicating with smoke signals while his father herds sheep far from home. Young Mikhail Gasanov as Bayir displays remarkable acting chops as do both camels.

One scene, however, mars the feel-good ending. In it, Quarter insensitively tells Bayir after both get soot all over themselves, “They won’t recognize you now. You’re black like an African.”

Russian and Mongolian with English subtitles.

In this film from Thailand, the animal bonding with children is a water buffalo named Samlee. An intriguing tale, Buffalo Rider features two main characters that never speak—one in defiance, and the other unable to. When 13-year-old Jenny is sent by her white stepfather to live with her Thai grandmother in Thailand, she is furious. Raised in Los Angeles, she’s like any other American teenager—playing basketball and never without her mobile device, the epitome of cosmopolitan.

In the rural area where her dead mother’s family lives, Jenny is treated well by her relatives yet feels alone and alienated. Refusing to speak to anyone, she nonetheless attends school where she’s spared some torment since the grandson of the village’s wealthiest man has a crush on her. But Jenny finds someone else more to her liking, a mute boy named Boonrod that she identifies with strongly when he’s humiliated in front of the class.

Hailing from an impoverished background, Boonrod finds solace riding or lying on top of Samlee while his father drinks and gambles away the family’s money. When Jenny discovers a competition for water buffalo riders to race to a finish line, she convinces Boonrod that winning would get his family out of debt. This rather heavy story highlights class differences, poverty versus prosperity, and even the privilege of having light skin over dark. Intense and dramatic, it also features beautifully shot scenes of Buddhist statues in a lush forest.

Lily Bhusadhit-a-nan as Jenny and Tuchapong Rugtawatr as Boonrod are utterly engaging. A scene where Boonrod is severely punished for fishing in waters belonging to an affluent family is memorable. While being caned by his angry father, he tearfully stares at a photo of a happy family advertised on a bag of rice.

Warning, the word ‘bitch’ is flung around a lot. Thai with English subtitles. 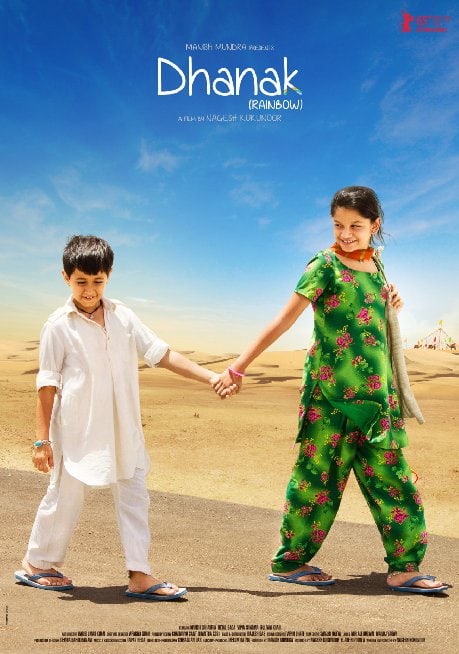 From India, comes Rainbow, a sweet story about a blind eight-year-old, Chotu, and his devoted ten-year-old sister, Pari. Living with their malicious aunt and submissive hookah-smoking uncle, the two orphans can’t bear to be separated. Pari even fails her class on purpose so she can sit with her younger brother in his.

Although the two are inseparable, whenever Pari ties Chotu to herself with a scarf, he protests, imploring her not to treat him like a dog. In fact, Chotu often complains about everything leading Pari to exasperation.

When Pari sees a movie poster of her favorite Bollywood star, Sha Rukh Khan, raising money to help the blind see again, she insists on meeting him where he’s shooting a new film—nearly 200 hundred miles away. Of course, Chotu accompanies her on the road as the two encounter a collection of folks, both good and bad.

Although a bit intense, this movie has a happy ending. Some light cursing includes the British term “bloody” and “asses,” as in butts. Still, it’s worth it to see the vibrant and charming actress Swastik Ram Chavan display the biggest, sunniest smile in the world. Hindi with English subtitles.

A live-action short, Mami, is a touching dramedy about two boys living in the Philippines. While one is a street beggar, the other attends school and has a father although neither has a mother. Meeting in their usual spot one day, they decide to draw pictures of what they think their mothers might have looked liked. This endeavor takes them on a heartfelt journey through a marketplace and speaking to strangers about their facial features.

Other notable live-action shorts include Autumn Leaves about an Iranian girl who can’t stop playing on her way to school; Story of a Lonely Goldfish with an Indian boy whose grandparents argue incessantly; Ghosts of Grandpa Tong featuring a hapa Chinese girl who’s the only one who can see the ghost of her Chinese Canadian friend’s grandfather; and, Moustache about an Indian boy experiencing puberty.

Among the animated shorts are: Konigiri-kun by the fabulous Japanese filmmaker Mari Miyazawa known for her artful bento; Fabric Cosmos about a boy, a chipmunk and their material universe; Perfect Houseguest featuring a fastidious mouse; PAWO with an adventurous courageous girl; Noir about a crow searching for its identity; Papa Cloudy’s Orchestra, a captivating tale about an ensemble of environmentally-aware animal musicians; and, The Reward a gripping tale of a Taiwanese man who pays back a vendor that once helped him with free food.

Besides films, there will also be hands-on filmmaking workshops and a drop-in animation station. Indian classical dancers will perform live at the Carco Theatre on January 23 with Indian sweets for sale in the lobby.