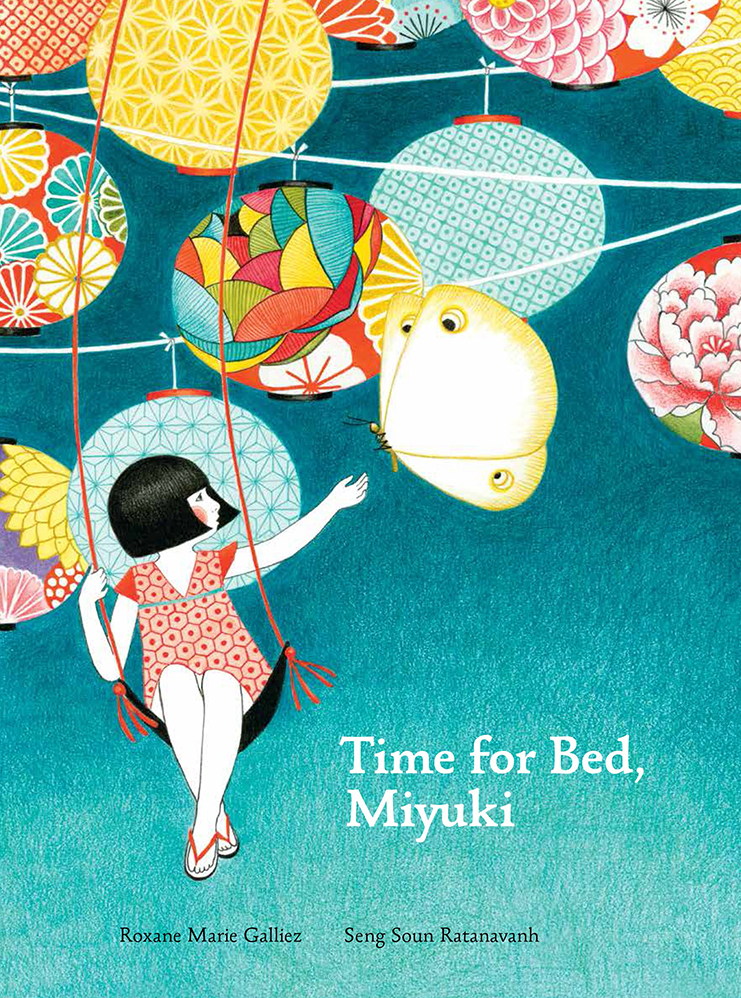 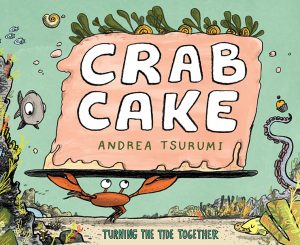 Suddenly the bright blue ocean is disrupted with the sudden pollution of trash darkening the waters. Shocked, the marine life are paralyzed with fear, what can they do? That is when Crab realizes the importance to what it always did, it bakes a cake. The familiarity of the frosted pastry comforts the community, enabling them to assemble and work towards a solution.

Andrea Tsurumi is a New York based author, illustrator, and cartoonist. Her experience in creating playful characters is evident, giving young readers an engaging narrative and illustrations inundated with treats. Delectable details of crab baking buns over a volcanic vent, a small hermit crab and its mom looking for its shell, is one of the many pages begging to be explored. The lively narrative combined with humorous illustrations promise a unique story with every repeated read. 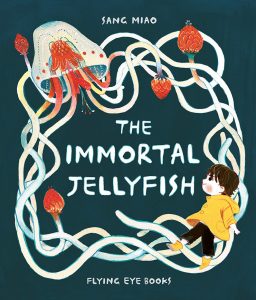 The Immortal Jellyfish written and illustrated by San Miao

Fantasy and whimsy guides readers through grief in The Immortal Jellyfish written and illustrated by Sang Miao. A young boy with brown hair and dark eyes is drawing with his grandfather. “Have you ever heard of the jellyfish that lives forever?” the grandfather asks. “It’s called the immortal jellyfish. Whenever it seems like it is about to die, it starts its life again.” Curious, the boy asks if human beings are immortal, to which his grandfather answers, “Not in that way…..But there are other ways of living forever.”

Sadly a week later, while the boy observes a deceased goldfish in a bowl, he receives news that his grandfather has passed. Overtaken with grief the boy dreams about his grandfather guiding the two together to a mysterious land portrayed by textured bleeding colors and fantastical creatures. There he witnesses how souls get to pick what form they will be remembered by in loved ones’ dreams. A former circus lion chooses to be a freely drifting cloud, a former accountant chooses a fish. The boy finally gets his moment of closure witnessing what form his grandfather chooses.

This somber yet hopeful title could be used as a model to help children deal with grief or initiate a discussion about loss. The narrative is quiet and respectful while the colorful and dreamlike illustrations are sure to capture the eye. Sang Miao is a freelance illustrator based in China. The Immortal Jellyfish is the first title she has both written and illustrated. 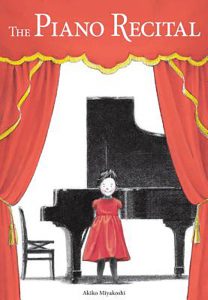 The Piano Recital by Akiko Miyakoshi

A young pianist finds an unlikely ally in The Piano Recital, written and illustrated by Akiko Miyakoshi. Illustrated in largely black and white with pops of color, a young girl, Momo, in a notably red dress, waits to perform at her very first piano recital. The intimidating venue adds to her nervousness with its large stage and grand piano.

While Momo whispers words of encouragement to herself, she is startled by a mouse at her feet. Wearing a flower dress, the mouse invites Momo to follow her, assuring her they’ll return back in time. Together they walk to another part of the stage to a small door. Through it, Momo and the mouse find themselves in a mouse-sized theatre, complete with a full audience and performers. Momo stares in awe as mice grace the stage performing acrobatics, dances, and music. Delighted by what she just witnessed, Momo finds inspiration for her own performance.

Initially the story gives a quiet impression with its muted colors and gentle narrative. However, Miyakoshi artfully introduces small sparks of wonder in both the illustrations and story, building up to a whimsical journey. This would be an ideal book to put into the hands of aspiring musicians or those looking for an imaginative adventure.

Akiko Miyakoshi is no stranger to fantastical stories. She has written several children’s titles that have won multiple accolades. She currently works and resides in Tokyo, Japan. 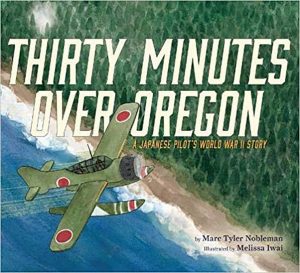 A little-known incident during World Word II is no longer overlooked in Thirty Minutes Over Oregon: A Japanese Pilot’s World War II Story by Marc Tyler Nobleman, illustrated by Melissa Iwai. The prologue explains that after the bombing of Pearl Harbor, the U.S. retaliated with bombings of Tokoyo. The straightforward narrative goes on to reveal that Japan had planned to bomb the continental U.S. in response.

In 1942, Nobuo Fujita was the solo pilot assigned to the task. Under the cover of darkness, his plane was launched from a submarine before he bombed his target, a forest by a small town called Brookings, Oregon. Luckily, because of recent rain, the only damage done was a couple of shattered trees, much to the confusion of the residents. Nobuo even went on to accomplish a second bombing in the same area, resulting with the same lack of success.

Years after the war, the city of Brookings found out about the stealth attacks. In an effort of reconciliation, the city offers Nobuo the chance to visit. Despite initial apprehensions on both sides, the visit is successful and leads to years of friendly communications and gatherings.

Melissa Iwai paints sweeping landscapes and sweet scenes of community healing. In the author’s note, Nobuo explains with introspection, the human toll and innocent lives that were shattered with the senselessness of war. While many children learn about World War II, very rarely do they learn how people dealt with its effects years later. An informative read, children can learn about healing and understanding. Marc Tyler Nobleman has written many other nonfiction titles while Melissa Iwai has illustrated many award winning picture books. 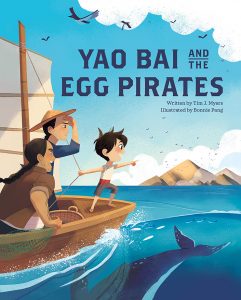 Yao Bai and the Egg Pirates by Tim Myer, illustrated by Bonnie Pang

A little ingenuity and quick action saves the day in Yao Bai and the Egg Pirates by Tim Myer, illustrated by Bonnie Pang. Set during the 1800’s, young Yao Bai lives with this family in a fishing camp nestled in the San Francisco Bay. Their livelihood depends on sailing to the Farallons, islands where they can gather murre eggs. These eggs are highly valued by miners for their large and thick shells making them easier to transport.

The straightforward narrative reveals Yao, his uncle, and father quickly gather a good haul of eggs, only to sail back home with trepidation. It is not uncommon for pirates to raid boats for their cargo. When the sails of a pirate ship do appear, it is up to Yao to come up with a creative solution to protect their goods and themselves.

Pang provides bright colored cartoons that don’t quite elevate the suspense and drama of confronting pirates. Another issue is the inaccurate portrayal of Chinese Americans in that time period, that unfortunately reinforce stereotypes. It is a bit puzzling to see pirates in better attire than the protagonist and his family. An afternote provides interesting insight to the history of Chinese fishing camps on the California coast.

This title shines a light on little known Chinese fishing camps during the 1800’s. However the inaccuracies of its illustrations undercuts its message. Tim Myers is a songwriter, storyteller, and author to many other children’s titles. Bonnie Pang is an award winning artist based in Hong Kong. 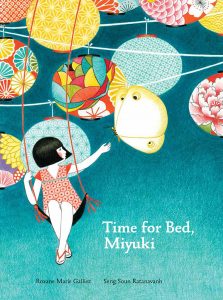 A young girl takes a fantastical journey to dreamland in Time for Bed, Miyuki by Roxane Marie Galliez, and illustrated by Seng Soun Ratanavanh. Miyuki’s grandfather beckons her to bed, but Miyuki has an excuse to stay up longer. “Why, I must prepare for the aerial of the Dragonfly Queen,” she insists while she is sitting on oversized lily pads. She is surrounded by brightly colored flowers filled with Japanese patterns and brightly colored goldfish.

Again grandfather prods her to go to bed, this time Miyuki insists that she “must gather the whole Snail family together.” for “If they are not gathered together, I will not be able to sleep.” Here she is portrayed walking on stilts made out of oversized colored pencils as she herds the family of snails.

For each persistent plea from her grandfather, the gentle narrative reveals that Miyuki has an increasingly imaginative excuse. After tucking in a beloved cat to bed, one last dance atop a group of mushrooms, and a bathtime complete with its own rain cloud, finally Miyuki acquiesces to her grandfather’s request.

There are no Japanese terms in the narrative, it is the illustrations that steal the show. Ratanavanh uses plenty of bold color combinations, textured landscapes, and larger than life proportions to create dreamy scenes punctuated with Japanese patterns and motifs. These drawings of dreamlike fantasies are sure to inspire the imaginations of young readers. Both the author Roxane Marie Galliez and illustrator Seng Soun Ratanavanh reside in France.