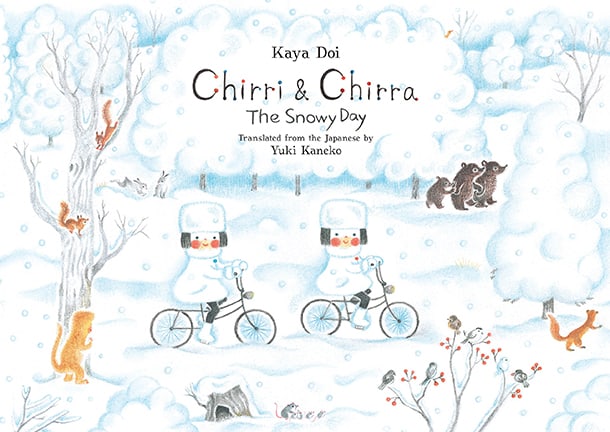 Follow these two adorable twin girls on a wintery journey through white and powdery landscapes that capture the essence of the season on the first snowy day of the year. As they set off on their bicycles with nothing but pure joy and excitement on their faces, they stumble across an icy world that is beyond their imagination. Set behind a glass door in the forest, they encounter many different animals that comes in many different sizes as well as colors that have already embraced the wintery weather as their own.

Not wanting to be miss out on all of the fun and festivities for themselves, the twins quickly find themselves taking in all of the ooh’s and ahh’s over the course of their adventures. From the moment of arrival where they are served hot drinks of fruit punch with apple and cinnamon by a goat and a monkey to ending the night as guests in a larger-than-life igloo as they gaze up at shooting stars, they take in every moment of this trip that seems to become bigger and magical with every flip of the page.
Kaya Doi’s imaginative story of a winter wonderland reminds readers of the pleasures of the simple things in life and finding joy through the seasons. Moreover, with artistic drawings that spur the imagination of both children and adults alike, the author gives an opportunity to the reader to escape into a reality where everything seems to fall into place where harmony and peace come together and conflict do not exist.

This short story is a great find for any reader that enjoys an absolute delight in the celebration of winter.

We can all agree that it’s never fun to lose an item that you treasure so dearly. In the case with this book’s protagonist, a literary loving turtle, he is sent out on a mission to retrieve his prized possession back. Not knowing its last location or its whereabouts, his journey begins in his very own turtle shell home where he hides all his belongings. To no avail, his favorite book is nowhere to be found.

Frustrated but determined, he remembers sharing his favorite book with someone. But who? Not knowing who that someone could be, he plans to further initiate his investigation to track his favorite book down. His search leads him to his friendly animal companions who comes in many shapes, sizes, and colors and also have the same interest in books as he does.

Going from one animal friend to the next in hopes of finding his treasured prize, the turtle comes up empty handed, but in the process has realized that each one of them has loaned his treasured book to a friend. The turtle’s friends try to cheer him up by offering him many alternative books to read instead. But turtle knew that any other book they offered just wouldn’t be the same.

Feeling sad and hopeless and down to his last friend, the turtle’s face lights up in joy as his prized possession has been placed in the strangest of places. Filled with excitement to have found his book, the turtle celebrates his luck by reading his book three times in a row in solitude.

Before long, he overhears the others talk about their favorite books and he becomes curious about whether or not anyone would like to read his favorite book about friends. With colorful happy illustrations, this lively book celebrates the love of reading and sharing that love and favorite books with others.

I Really Want to See You, Grandma

The proverb, “if at first you don’t succeed, try, and try again” rings true in Taro Gomi’s latest children’s book that addresses the importance of persistence and not giving up too easily. Living far away from each other, Yumi and her grandmother decide on one bright sunny day to set out on a trip to see one another. Despite their good intentions, the struggle becomes real as both of them are seen passing by each other on their way to their destination.

Using different types of transportation to get to the other person’s house, they both come to the realization that the other person keeps on ending up on the other person’s starting point. Frustrated but not ready to give up, it takes both of them multiple attempts back and forth and an agreement to meet halfway until they see their perseverance and determination pay off.

Eventually, both Yumi and her grandmother arrive in each other’s arms and agree if the next time something like this were to come up again, they would wait for each other beneath the same tree next time the urge to visit comes.

Simple and straightforward, Gomi’s novel alludes to how one should never stop and give up in the pursuit of their goals in life. This notion is well represented in their constant pursuit for one another through trial and error.

Gomi’s wonderful illustrations offers many details that the text may not, as on many occasions, the expressions on the character’s faces not only gives indications to the idea of the bonds between family members but also adds humor and meaning to the story. This story is a real treat that will have you spinning on a roller coaster of emotions from beginning to end.

One man’s trash is another man’s treasure in Barbara McClintock’s wild and funny story of a girl coming across a mysterious book about martial art forms that was left behind and left alone on top of the trash. Upon its retrieval, she would come to the realization that she was in for a surprise and would receive more than what she had bargained for.

As she takes the book home, she finds herself stuck in many sticky situations as the book not only teaches you the poses of each animal, but that the animals in the book also come to life. As she begins to prefect the craft of martial arts without anyone there to guide her, she fails to read the warning label printed between the pages in fine print and as a result, manages to first unleash the spirit of a crane, which becomes problematic and destructive.

Desperate for a solution to tame the wild animal that she had created, she reads further on in the book and realizes that the solution to the problem relies on her contorting her body into the form of different types of animals, each of which chases the other ones. The chaos and pandemonium comes to a screeching halt when the last and final form is mimicked and everything returns back to normal.

With each of the animals back in their place and the house a complete mess, the girl wastes no time in putting everything back in place and finishes just in time for her mother to not find out what had happened. With her mom holding two tickets to the zoo in anticipation for a less chaotic experience than the last, she heads out the door with the martial arts book in hand, ready to set it back in its original location for the next victim to pick up.

Doused with colorful artwork from cover to cover, this book is a fantastic introduction to the ancient art of martial arts.