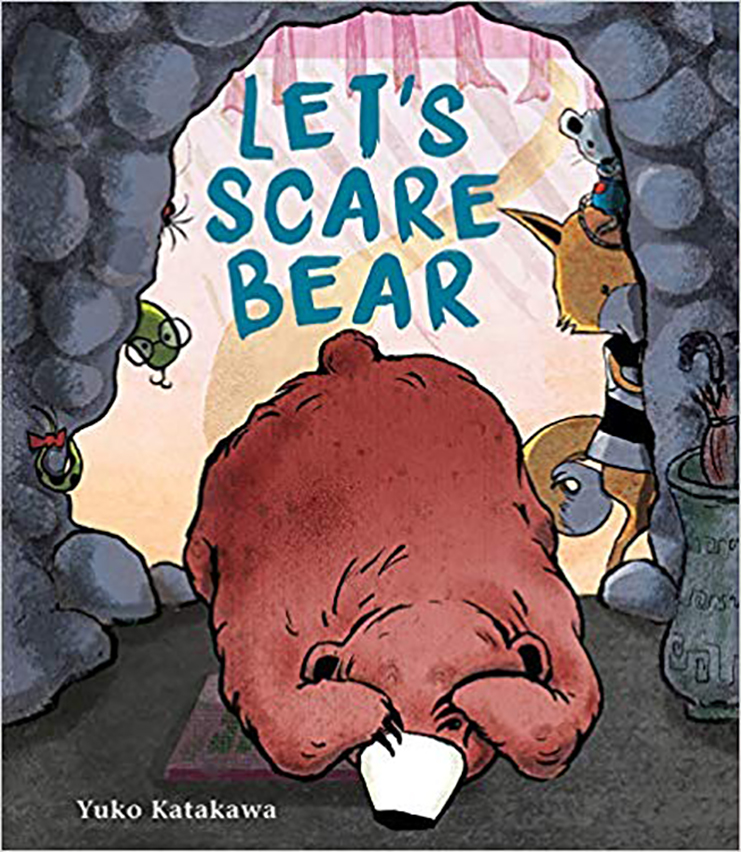 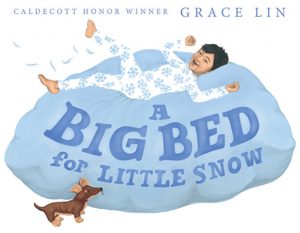 Childhood glee results in a sudden blizzard. Little Snow, an Asian boy clad in white pajamas decorated with blue snowflakes, is waiting while his doting mother prepares his bed for him, a large dark cloud. After putting him to bed Little Snow’s mother reminds him with a knowing smile that his “bed is for sleeping, not jumping.” Little Snow responds with an obedient nod and snuggles into the cloud to sleep.

It comes to no surprise that Little Snow’s eyes fly open immediately following his mother’s departure. And what is the first activity of choice? Why, jumping of course! While keeping an eye out for his mother, Little Snow keeps it fresh alternating between “small, soft jumps.” to “big, high jumps!” Little Snow’s antics eventually result in the bed’s seams ripping, spilling many “feathers” that trickle down to become a thick blanket of snow atop a brick apartment building. The young diverse inhabitants of the building stare out of the windows in wonder and joy at the sudden flurry of snow. Now what will mother think?

Grace Lin is a Chinese American author that just recently won a Caldecott honor for her last title A Big Mooncake for Little Star. A similar tale, a young girl’s hunger for mooncake explains the phases of the moon and a star filled sky. Again Lin’s realistic paintings paired with simplistic narration makes for a fun and whimsical read, appropriate for any season of the year. 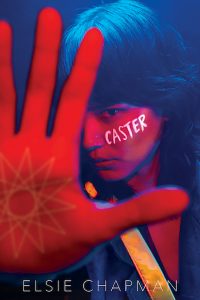 In Aza Wu’s world, magic comes at a hefty price. All magic derives from earth, as a result whenever someone casts a spell, known as a caster, a part of earth is destroyed. The destruction is expressed in a range of natural disasters, ranging from a sinkhole to a full blown earthquake. The caster does not leave unscathed either, pain blooms throughout their body getting worse based on the size and complexity of the spell. Some are even permanently scarred. As a result, society has banned magic altogether, forcing individuals with full magic to hide their abilities. Many end up selling their services on the black market for marks in order to survive.

Since the death of older sister Shire, Aza has been struggling to keep up with payments to the local gang to keep her family’s Tea Shop running. Haunted by the mysterious circumstances surrounding Shire’s death, Aza chases rumors eventually leading her to a secret casting tournament. Risking life and limb Aza participates hoping to be one of the last casters standing in order to get enough marks to free her family from debt and uncover the truth about Shire’s death. Just when she has her goals at her fingertips, a nosy scout, and several sudden revelations complicate Aza’s chances of success and survival. There is a slim chance she may be able to get away with it all, but not before paying a steep price.

This dark dystopian fantasy is infused with Chinese culture though character names and terminology. Chapman is a veteran young adult author who is skilled at pulling readers into Aza’s world. She artfully paints fantastical magical settings to gritty visceral spell battles. While there are a few overlooked loose ends that will leave some lingering questions, the solid world building and gripping narrative will keep readers engrossed. 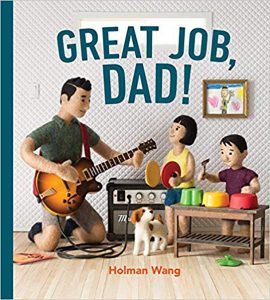 Wang is a Canadian author and illustrator based in Vancouver. His books are marked by his signature style of illustrating using wool felted models. These models are created by poking wool with specialty needles to eventually mold them into a desired shape. Once the models are done, Wang goes on to build detailed miniature sets and props then photographs them all against a natural backdrop. This results in alluring scenes that capture the eye. For this particular title, Wang explores the various roles fathers often fulfill for their families at home.

A hard working Asian father “works as a manager from nine to five each day. At home, though he’s a waiter, except without the pay.” It is when the unnamed father goes home does he go on to other roles involving his school age daughter and toddler son. The spotlighted “roles” are a mix from inspector (checking for a messy diaper) to librarian, the father is shown reading a book with both kids while snuggled under a comfy blanket.

Following the same format as the companion book Great Job, Mom! Wang spotlights sweet snapshots of the family enjoying each other’s company as well as some messy moments. In the same vein Wang ends with a statement examining the motivation behind the work the father does at home compared to his career. An afternote provides additional behind the scenes look at Wang’s creative processes. Ideal for a family themed storytime, young readers will enjoy the warmth and charm of the book’s art. 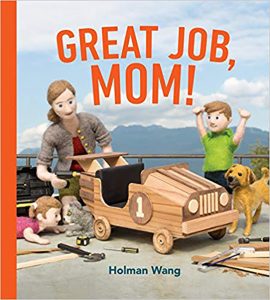 A celebration of mothers. Each page is dedicated to one of the many hats mothers wear day to day for her family. A blond and blue eyed woman surrounded by tools and cuts of wood is finishing a dresser, “My mom works as a carpenter. She builds things big and strong.” Another portrayal shows the same woman using a grocery bag to dress up and engage her son and young daughter, “At times she has an actor’s flair- without a line rehearsed!” A new scene and fresh role is shown varying from the role of scientist, zookeeper, to doctor and DJ.

There is a good balance of STEM careers and art centered ones as well. As the young family moves between each distinct scene, there is a constant theme of love and care. Wang poses each character with affectionate body language and expressions. All are enjoying the memory the family is creating. A sweet conclusion states the motivations behind a mother’s job.

Wang is a Canadian author and illustrator based in Vancouver that specializes in needle felting. This painstaking method requires poking wool with specialized tools in order to sculpt it into the desired shape. For this particular work, Wang creates models of the mother along with her son, and young daughter with intricately detailed sets posed against natural backdrops. An afternote provides more details and photos of his work. 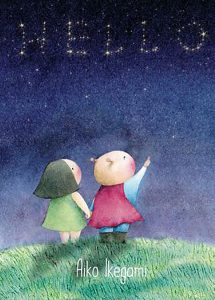 This wordless book chronicles a story of friendship of intergalactic proportions. Ikegami’s illustrations characterized by rounded shapes, softened edges and textured gradients of bold colors introduce a small alien. Clad in a red cape, blue jumpsuit, black boots with small pink antennae and a rounded face, it lands its red and blue ship on earth. Ready to explore the alien finds the closest city and quickly gets overwhelmed by the rush of the daily bustle, rendered in black and white.

It is a young girl with black hair, pale skin, in a green dress, who notices and offers the alien a crayon and paper leading to a decorated paper airplane adventure. As the duo fly their planes the girl gets hers stuck in a tree which is quickly retrieved by alien’s remote device. A similar incident follows when the girl drops her ice cream, alien’s device saves the day again.

Inevitably the new friends must part as alien returns to its homeland to report its findings. Ikegami ends on a heartwarming note for both the reader and young girl. Ikegami has written several other picture books all focused on friendships. A charmingly illustrated story, young children on the cusp of reading will have the opportunity to narrate this tale. 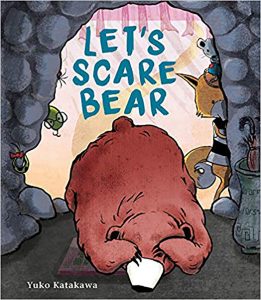 Mouse, Fox, Spider and Snake are gathered together enjoying manju, a Japanese treat filled with sweet fillings like red beans similar to mochi, but made with flour instead of pounded rice. Their party is suddenly disrupted when a big brown bear comes stomping down the path. Frustrated at the interruption, Mouse encourages his friends to try to scare bear. Fox bares his teeth, but bear’s teeth are sharper. Spider tries to tie bear up in his web, but bear is much too strong. Each friend fails in their valiant attempts to scare off the powerful foe. Flustered they finally ask bear what does scare him, to which he answers, manju.

Surprised by his answer the group return and gathers what’s left of their manju party and proceed to bear’s cave. Comically they use different methods to overwhelm bear with their delectable ammunition, from throwing the manju into the cave to using a tennis racquet. An amusing trick revealed at the conclusion ends up with many of the characters puzzling over what just happened.

In her picture book debut Katakawa introduces her retelling of “Manju Kowai”. Originally a Japanese rakugo tale, it is traditionally told orally with a single storyteller. Katakawa also provides the illustrations using digital tools to bring textures and movement to the energetic characters. A great read aloud, this would be an ideal pick to explore Japanese culture or just enjoy a trickster tale.