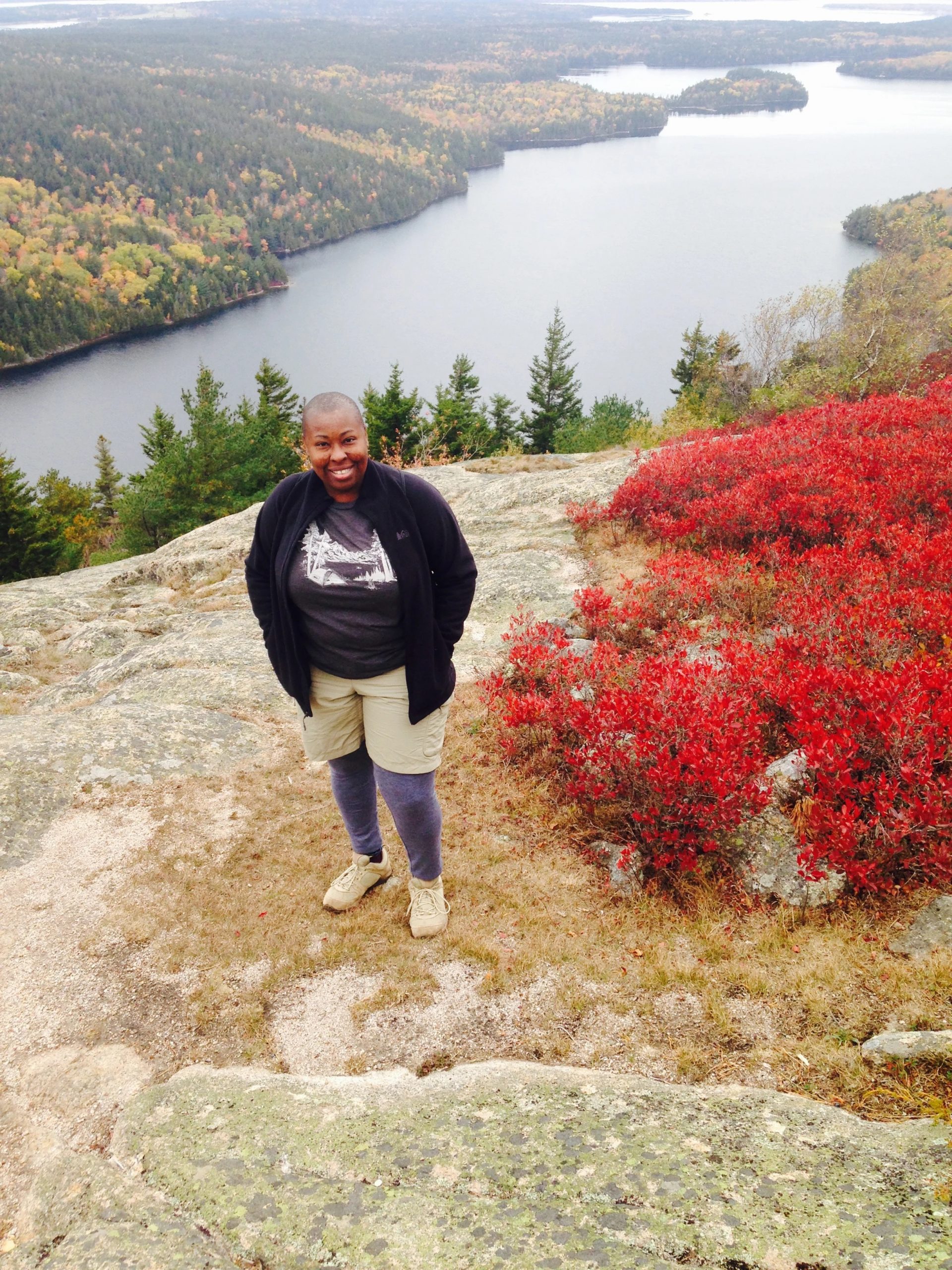 Chevon Powell grew up soaking up the outdoors in Texas, with summer afternoons of fishing, biking, hiking and more, affectionately kicked out by her grandmother’s orders, “Stay outside, keep the door closed, and don’t come back inside!”

Whether she initially wanted to or not, Powell found herself loving the outdoors, and after earning a degree in sports entertainment event management and working for several years in a corporate environment, Powell headed north in search of a new adventure. In the process, Powell found a city where the scenery, opportunity, and location enticed her into setting up camp, and has been based here ever since: Seattle.

Several years after her move, Powell began her professional journey in the Northwest at REI’s corporate offices, where she worked as an internal events planner. As she shared her love of the outdoors with her co-workers, she noticed a trend: “My co-workers there thought REI had introduced me to the outdoors,” she said. Although the microaggression presented itself in a multitude of awkward forms, the message was clear: Black people don’t go outside and/or participate in outdoor recreation.

In response to those attitudes, and the experiences that people of color and Black people have gone through because of those prejudices and misconceptions, Powell is now organizing the first annual Refuge Outdoor Festival, which will take place September 28-30 at King County’s Tolt-MacDonald Park in Carnation, Washington. Ahead of the festivities, Powell sat down with the International Examiner and discussed her lifelong passion for nature, the need for equity and representation in outdoor recreation, and the upcoming festival.

IE: How did you bring your childhood love of the outdoors to your current professional life?

Chevon Powell: My outdoor experience really centered around summers… I [started with going] to a summer camp for burned children [at three years old]… and Girl Scout camps, and then just literally being kicked out of the house [to play]…we fished, we hiked, there was biking… and then, also you know, ‘look at the stars,’ ‘look at the sky,’ ‘bring home some leaves.’ I brought home poison ivy! I realized that I just loved being outside after a while. And when I started getting older, I started walking everywhere, from here to Timbuktu.

IE: What experiences have you had that highlighted the lack of representation, support, and advocacy for Black people and people of color in the outdoors?

CP: I had a trip to Vermont [Powell went on an Employee Challenge Grant from her former employer, REI] a few years ago—when I arrived, I was pulled over by the police [around] probably 9 or 10 o’clock at night—at that time, I had no hair, I had shaved my head bald… and I didn’t have on earrings, so think of a big, black looking man driving into town.

So they were following me, and when I finally pulled into my hotel—it was so late, I wasn’t going to set up my backpack or my campsite that night—[the responding officer] pulled in, turned on the sirens… and told me he had pulled me over because I had been looking at my phone. I had been looking at it to make sure that I was going in the right direction because I’m not from here… he [asked] “what are you doing here?”, and I told him that I was here for backpacking and outdoor recreation… and that’s when he started saying that that was unbelievable. That my story was unbelievable.

He ran my information and called for backup, because he could not fathom me being in the area just to do outdoor recreation. Once backup came, he told backup loudly, “I just don’t believe it! I don’t believe it! It’s unbelievable!” I was just like… you can see my hiking shoes, my backpack is in my trunk, like I was going [to go] out on the trail, backpacking…and I remember the other cop finally saying, “Let her go.”

It was by far my most traumatic police incident—I’m a big black woman from Texas, I’ve been pulled over more than once, I’ve been followed and pulled over, I’m used to that—but the way that that went down was something different. I just thought, ‘why is there still this misperception that someone who looks like me isn’t in the outdoors?’ I had started doing this from my summer camp from when I was three years old, I hike all the time, I travel everywhere, I always go out for walks, hikes… it was so shocking that it was so unbelievable to someone, and that’s when I decided to figure out how to use my skills so that other people don’t go through that.

IE: How can privileged outdoor enthusiasts use their privilege to aid in the safety and visibility of Black and PoC outdoor recreation?

CP: Check your privilege and recognize that this is not only your space. We are all enjoying Native space—I say that first and foremost—and also don’t be surprised when you see me on the trail. Don’t be surprised when you see one of my Latino friends on the trail, one of my API friends. Don’t make that eye contact like, “Wow! Good for you to be out here today!”—don’t say that! Do not say anything like that—be friendly, but don’t be so surprised that you start acting awkward.

Drop the generalizations that people of color aren’t outside. It’s just not true—we are outside, we just do it and it looks differently. Drop the misperceptions.

IE: What should outdoor organizations know about their role in PoC and Black visibility and safety?

CP: It’s not on us. It’s on outdoor organizations, rangers, to do the work. That’s one of the things that I am adamantly sharing when I work with these organizations—you need to do the work, because you can’t just send your people over when there’s a big group of people of color outside, or two people, or one. If you don’t do it to every white person who’s out here camping, don’t do it to every person of color who’s there.

IE: What is the mission of the Refuge Outdoor Festival, and what will it offer to PoC and Black outdoor recreation enthusiasts?

CP: I think that we are still in a place where we highly recognize and celebrate spaces that are ours. When I just say the words—that this space is geared towards PoCs—people are just like ‘what?! You mean, people are going to look like me, and it’s going to be all of me, and I can show up like me?’

Show up like you. Stand in your truth and your power, and be authentic in a space with people that care for you. Just creating that opportunity for people to be themselves, and to also meet people and engage—this isn’t just about one weekend. This is about having our cultures together, in a unique environment, and showing up as we are, and being authentic to ourselves and supporting ourselves.

Learn more about Refuge Outdoor Festival. You can support the festival here.