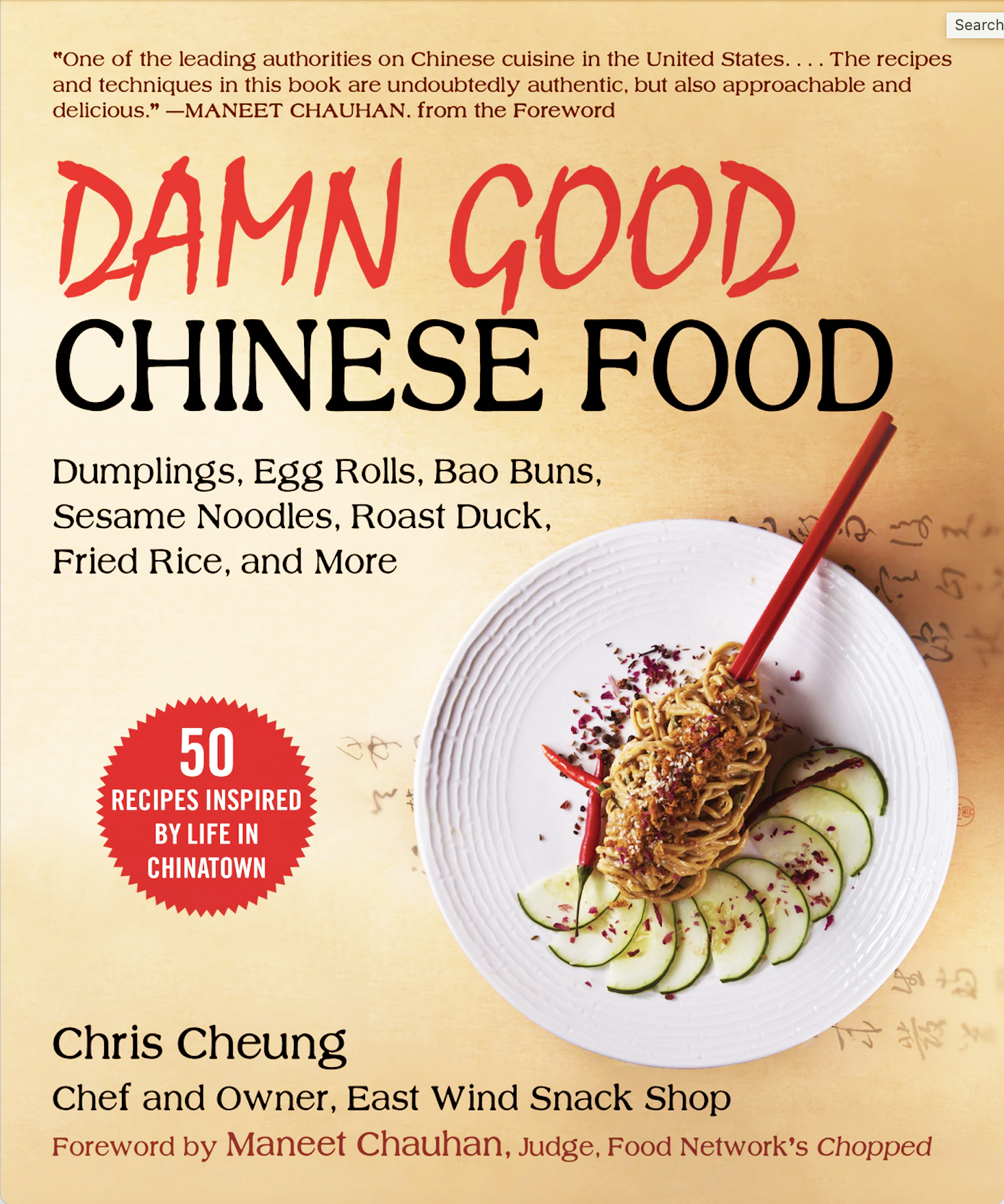 Leading off with a profanity, Damn Good Chinese Food, is an atypical ploy for the title of a Chinese cookbook.  It grabbed my attention, however.  As did its page one inscription: “. . . dedicated to every Chinese family who struggled, strived, and kicked ass here in America.”  Wassup? I wondered.  Whatever happened to “tasty” and “delicious”?

It’s Chris Cheung’s Big Kowtow to the food of Chinatown.  Frequently ignored as a “cuisine”; more often a correlate to “take-Out” for chow mein interlopers.  Chinese fare is habitually typecast in the role of cheap, filling, semi-exotica meals consummated with a batch of Fortune Cookies.

Cheung is on a rip to alter foregone perceptions.  A New York native with strong Chinatown roots, he grew up steeped in the Cantonese culinary tradition.  His backdrop as a chef is well-established: a graduate with honors from the New York Restaurant School, followed by upscale stints with Michelin star chefs at first rate restaurants (Jean Georges Vongerichten at Vong, Masahara Morimoto at Nobu), a top chef at New York’s Ruby Foo’s and the world-famous Monkey Bar.  Overtly qualified, Cheung has been cheffing in the Big Apple for over two decades.

In 2016 he partnered with Indian American chef and Sikh restaurant owner Maneet Chauhan to open a restaurant in Nashville (yes, THAT Tennessee), often commuting back-and-forth from city-to-city in his role as menu architect and executive chef.  Tánsuŏ (“to explore” in Cantonese) is a “modern riff on Chinese classics and dim sum” spotlighting a menu offering described as “playful yet refined”.

The chef-a-holic is also the founder of the Asian Food Mafia – a side hustle he instigated with a coalition of Asian chefs and restaurateurs based in NYC and the boroughs – created in 2016 to advance Asian cuisine in the city, provide community events, and overdrive the conversation on how Asian food will be evolving.  Take a listen: Asian Food Mafia / Talks at Google —https://www.facebook.com/asianfoodmafia/photos/a.347077689020251/439482846446401/

“Great Chinese food is peasant food, but it’s been perfected for thousands of years,” states Cheung, appending his thesis with “great food (is) one of (Chinatowns’) true treasures”.  The book sets out to substantiate the claim, focusing on the food and culture of the world-wide ethnic enclaves which have preserved one of the finest culinary traditions of the Middle Kingdom.

“The one constant is Chinese people love their food,” Cheung continues, “We love cooking and we love eating.”  The twelve chapters in his book bear witness to this.  Each chapter begins with enlightening conversational introductions and salient background information on the topic, followed by recipes, special tips and notes.

In chapter one, The Market trots you through the various stalls and stores, detailing highlights of what can be found in each; Cooking Tools and Equipment issues thumbnail sketches on rice cookers, dumpling equipment, woks and such; Home Cooking describes the goings-on in the kitchen, introducing the Kitchen God who resides there, and Sunday Dinner recipe examples prepared under the scrutiny of the KG’s watchful eyes.

Chasing the Perfect Dumpling is his most extensive chapter: 34 pages wherein he shares the opening of his East Wind Snack Shop (“My love of dumplings started as soon as I could eat them….  The magic of (those) dumplings would inspire me as a chef and influence how I cooked.”)  Conscientious in portraying the elements of a great dumpling, he waxes rhapsodic in detailed descriptions of the wrappers, fillings, storage, cooking, sauces/oils, and concludes with a slate of recipes — “a six-pack of the most best-tasting, most popular, most fun types of dumplings you can make.”  Big D fans, this chapter should be the book’s pièce de résistance!

The other chapters follow in rapid succession: Chinese American Cuisine; an entire chapter on Vegetables; a combined Fish and Seafood section; Meat and Poultry; a segment on Damn Good Snacks; Birthday Dinner featuring banquet style dishes; and a short installment of Sweets.

The final chapter, Chinese Food for Thought is a brief, but emphatic two-page epilogue sharing his thoughts regarding Chinese cuisine’s past, present and future.  Pre-pandemic, Cheung notes the nation experienced “a Chinese food renaissance going on in full swing”.  Post-pandemic, he predicts is “a crossroad for Chinese culture, its food and its people.” His plea to readers is to “stand up for Chinatown” and all it represents.  To survive, every Chinese chef, he warns, will need to “cook our asses off, put on our game face, and be ready for whatever comes next.”

The feisty, intrepid author ends with an explicit rant against the anti-Asian violence plague that continues, unabated, to ravage the nation’s Asian populations.  “I won’t stand for this.  This has to stop,” he emphatically declares.  “Hear us.  Respect us.  We ain’t just food.  We are Americans.”