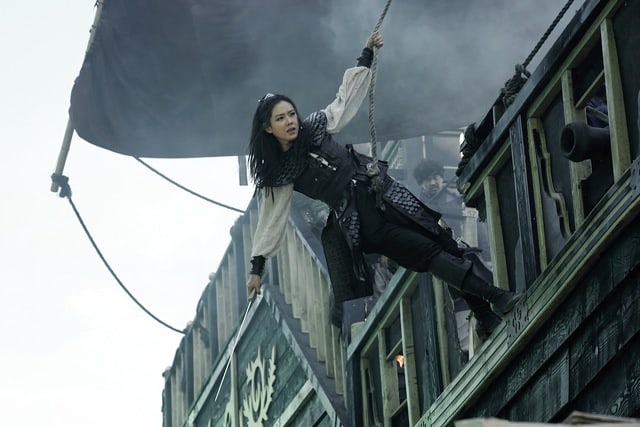 The Pirates, which takes place in 1388, should really be titled “The Pirates and The Bandits” as both groups enjoy equal onscreen face time while they diss each other in an attempt to prove which is superior.

After Captain Jang Sa-Jung (Kim Nam-gil) is forced to watch his best friend beheaded because he, Jang, dared to defy the general’s orders, Jang heads to the hills to join a group of bandits. Along the way, he acquires his new name, “Crazy Tiger.”

Meanwhile, Yeo-wol (Son Ye-jin) is a nimble yet fierce woman being mentored by fellow pirate Soma (Lee Kyeong-yeong). With tattoos of what looks like elongated bats along one side of his face, Soma is downright creepy. Driven by his insatiable desire for power, his need to control culminates in his decision to kill some of his own men just to put the fear in the rest of his crew. Those executions then lead to a mutiny with Yeo-wol in charge, and backed by the young woman she rescued who appears to be infatuated with her.

As the newly formed Joseon Dynasty is being established, leaders around the country spout words about “making a new country for the people.” The new governing group is even given The Royal Seal by the Emperor of Ming. Unfortunately, it’s swallowed by a really big fish, which turns out to be a mother whale with a baby.

With a substantial reward offered by royal advisors lying to protect their jobs by blaming pirates for the lost seal, the bandits make their move. The ruler’s stipulation of a time limit for retrieving the seal forces the advisors to invent implausible excuses as the whale becomes more elusive. Further, the pirates face a dilemma in clearing their name when their leader, Yeo-wol, bonds with the creature.

While it’s commendable that director Lee Seok-hoon features a female action figure like Yeo-wol who can swing from ropes and draw a sword as well as any man, he could have refrained from having his male characters endlessly evoking the “b” word.

Over two hours of adventurous exploits, black comedy and the majestic sea make up this spectacle, but a budding romance between Yeo-wol and Jang never really manifests; and, the story meanders as it attempts to tie together disparate elements. In the end, the whale’s character proves to be the most moving. 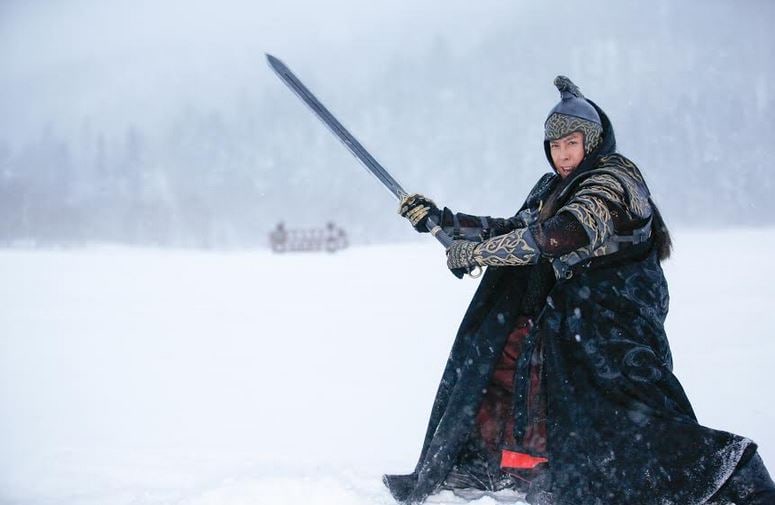 As for Iceman, if you’re a Donnie Yen fan you might not recognize him all dolled up with waist-length hair and wearing an outfit that parts of look like something Keanu Reeves borrowed for The Matrix.

An elaborate story about time traveling, Iceman was filmed in 3D, although this version isn’t; thus, making objects hurled towards the screen look peculiar. Although there’s plenty of action showing off Yen’s high kicks and leaps, the narrative about three friends who become enemies then meet again in the future requires a major suspension of belief.

When He Ying (Yen) a high-ranking guard of the Ming Emperor is sent to India to retrieve a time travel gadget, he learns it can only be activated by the Hindu god Shiva’s penis in crystal form. While searching, He is accused by fellow soldiers Sao (Wang) and Nie Hu (Yu Kang) of conspiring with Japanese. The men fight ferociously in the snow until an avalanche buries them all for 400 years. Then, during a trucking accident, He is defrosted and finds himself in the urban jungle of hi-tech Hong Kong. He also finds a “girlfriend”, May (Eva Huang), the worst stereotype of a pouty-lipped, dingbat hustler dressed in boa feathers and fuzzy sweaters.

Directed by Law Wing-cheong, Iceman boasts me truly annoying background sounds, including clanging swords that start and stop every few minutes to urge the action along. There’s also a running joke about curry chicken that appears to be ethnically based.

The climactic scene with prolonged fighting among the three men on Tsing Ma Bridge absolutely defies believability. As they attempt to slaughter each other with colossal weapons capable of pulverizing vehicles, cars continue crossing the bridge honking at them while no police or ambulance ever arrives.

Another unbelievable scene features the soldiers in a urinating contest with the amount of fluid they produce capable of drowning a whale, much like the one in The Pirates.