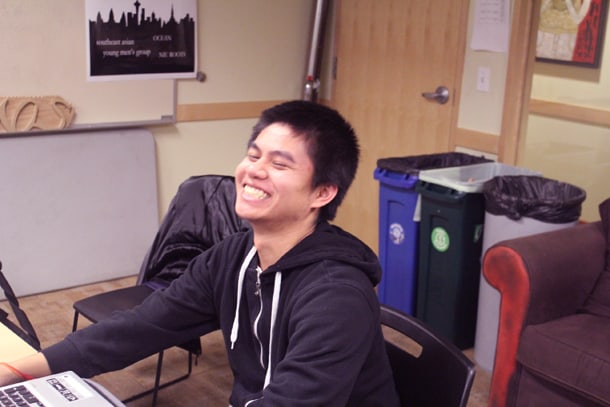 Filmmaker Chanthadeth Chanthalangsy dreaded roll call in classrooms. His name, which took up the whole top of the paper in class, had once been a source of frustration and misunderstanding.

Now, his name, Chanthadeth, is also the title of a film being featured at the Seattle Asian American Film Festival. The film’s showing on February 20 at 2:30 p.m. at Northwest Film Forum is thus far the culmination of a four-year journey for Chanthadeth, who began work on his film as a participant of the Southeast Asian Young Men’s Film Group while still a student at Franklin High School. The film program is offered by Asian Counseling and Referral Service. He is now a student at the University of Washington.

“Growing up I didn’t really connect to my parents, but making the film made me really understand more about them and what they’ve been through,” Chanthadeth said. “They shared some experiences that I didn’t even want to ask before making the film.”

According to Southeast Asian Young Men’s Film Group director, Joseph Mills, this is precisely the point of the program.

“In some ways it is not really a film program as much as it is a program designed to connect kids with their culture and their parents and their communities,” Mills said.

The ongoing mission of the program is to continue supporting its young men to embrace their culture, identity and history.

Ricky, another participant in the film program, has been a member for over five years. He said he doesn’t plan on leaving anytime soon.

“The first time I went they bribed me with Thai food,” said Ricky, who kept coming back for the unique lessons he was getting, things that weren’t being taught in the classroom. “We just always talked about interesting things at group. We talked about Asian cultures, family and health relationships, good choices and stuff. Stuff you don’t normally talk about at school. It intrigued me,” Ricky said.

The program no doubt creates captivating short films, but this is primarily because of the intimate journey the viewer is going on with the filmmaker, Mills explained. Films like Chanthadeth as well as upcoming films about being mixed race in the Southeast Asian community are engaging opportunities to get a glimpse into the experiences that help shape the identities of these young men, he said.

The film program, now in its eighth year, has also seen some significant changes in the experiences of the young people it serves. Mills said the short films are a way of capturing the evolution of refugee communities in South Seattle.

“The biggest difference is that you have a lot of kids who we work with who were actually born in a refugee camp or were born right after their parents had just arrived,” Mills said. “Today the group is more representative of second and third generation groups who face a different set of challenges than those who came before them.”