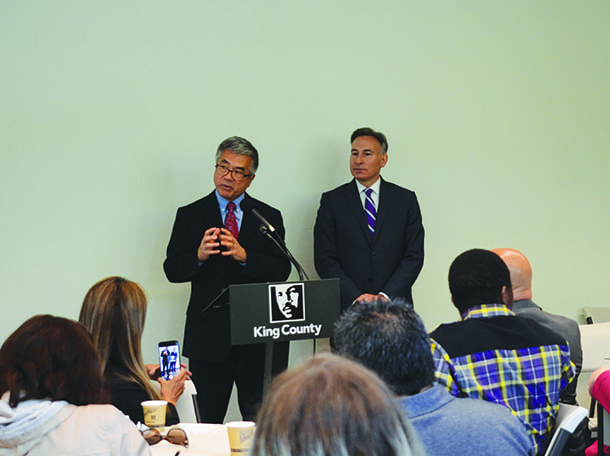 The decennial census happens every 10 years, and the 2020 Census is fast approaching. But unlike previous census counts, the upcoming questionnaire will feature a question about citizenship which has not been on the census since 1950. Immigrant community members are especially concerned, an anxiety sparked by the current administration’s hostility towards immigration.

In response to this uneasiness and fear, local community organizations, like Coalition for Immigrants, Refugees and Communities of Color (CIRCC), are rallying around the call to make sure everyone is accounted for, and that they understand that filling out the census will not jeopardize the safety of non-citizens.

Census basics
The national census is not simply a way of documenting demographics and counting the number of people residing in the country. It is a way of parceling out power and resources to states.

When people do not fill out the census, it leads to an undercount. That could cause the state millions of dollars in federal funding. limiting the financial backing and support needed for services that affect various groups of people. According to the George Washington Institute of Public Policy, even a one percent undercount would leave King County $87.8 million short over the next 10 years.

At a recent community reception where government officials and community organizations came together to strategize how to engage HTC communities, King County presented mapped data from 2010 where many HTC communities were clustered in South King County. Parts of Central and South Seattle, Burien, Kent and Des Moines had very low response rates in 2010, data that might predict those same areas as HTC areas when it comes time for the 2020 Census.

Many of these areas have significant immigrant populations, including Asian immigrants. In many immigrant communities, or in households that may be connected to family members who are immigrants there are many reasons why one may be hesitant to fill out the form.

Other than language barriers, non-citizens sometimes conflate the census with voting and assume that if they cannot vote, they cannot fill out the census. However, the census is meant to count all people living in the United States regardless of citizenship status. In some immigrant communities, questions can also be confusing – many people need assistance to understand the meaning of questions being asked and how to respond.

Cherry Cayabyab is the co-founder of CIRCC and Inclusion Advisor for King County. She says this often happens with the race question, where categories of race in the questionnaire may not match one’s own understanding of ethnic or racial identity.

Cayabyab says it is crucial that immigrant communities fill out the census because by doing so, it increases the chances of getting funds that can support the kinds of culturally specific services and resources they will need, whether directly from government or from community organizations who receive state and federal funding.

“A lot of us [community organizations] are doing this because we know it’s a necessity and its important. We need to know how our communities look like and community organizations use census data to understand what their service needs are. We use census data to write grants, to get funding and resources to serve our communities in a culturally competent way,” she said.

This isn’t the first time that communities have organized around census related concerns, though the added question of citizenship brings up some unique worries. API communities in the region have had a rooted history in rallying around the Census. In 2010, community organizations worked to dispel myths about the census, carefully decoding misconceptions of the questionnaire’s safety and use. The resulting data helped bring about systemic change:

“Chinese ballot translations become mandated in Census 2000 and Vietnamese from Census 2010,” explained Cayabyab. “Those are all impacts from Census community participation. Focus groups were done, and the API community worked directly with the Census bureau to educate them and do outreach together to API communities and to communities of color as well.”

In terms of who is held accountable to make sure an undercount doesn’t happen, “the onus has almost always disproportionality fallen onto communities and local institution,” said Cayabyab.

At a community strategy workshop in White Center in early June, community organizations like CIRCC and many others representing various immigrant and refugee communities gathered with King County officials including King County Executive Dow Constantine. Former Washington governor Gary Locke was introduced as the chair of a planning committee that has until September 1st to come up with a legislative plan that will make sure to engage HTC communities while also ensuring their safety.

Current legislation requires that the planning Locke will lead must be sure to include “processes that are inclusive and open, and in particular raise the voices and power of those in the community who have been historically sidelined by those who have traditionally exercised power.” In addition, the legislation is dedicated to working with community partnerships and stakeholders who truly represent the concerns and challenges of the HTC communities.

The strategy session was a head start, where 90 attendees from community organizations, service providers, ethnic media and others broke into small groups to brainstorm what engagement would look like for their HTC communities. Fear, a lack of understanding the United States’ electoral system, confusion between voting registration and census – these were just some of the barriers that HTC communities faced when getting involved with the census.

Attendees then shared their solutions to these barriers with Constantine and Locke to help the upcoming planning process. Solutions included clear messaging and outreach to members of the HTC communities, differentiating the census count from voting registration, and leading in community-based spaces.

Many of the same challenges that existed during the 2010 decennial census remain when it comes to counting HTC communities in 2020. But with growing hostility towards immigrants from the Trump administration and disorganization at the federal level at the Census bureau, local and community forces are trying to fill the gap and stand strong in the face of uncertainty.

A clear plan of action involving local and state government as well as community organizations will become clear on September 1st.