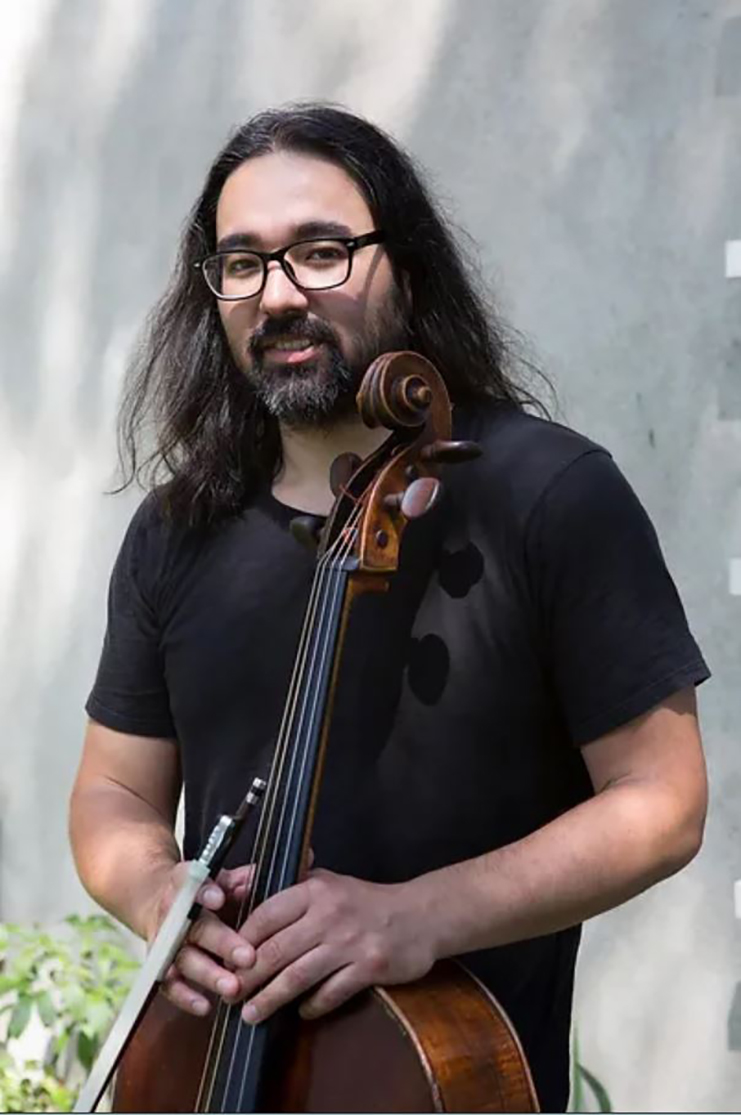 Most cellists play the works of composers as part of a symphony or quartet, while a few musicians specializing in cello compose their own music. But Boston-based cellist Leo Eguchi is doing something different:  he commissioned eight new solo pieces from immigrant and first-generation composers, five of whom are Asian Pacific American. He has named the project Unaccompanied, and plans to perform all eight pieces for audiences throughout the U.S.

To launch this project, Eguchi reached out to many composers and funding resources.  “The composers in this project are mostly artists whom I have deeply admired for years, plus a couple that I didn’t know previously but seemed like they would add a lot to the conversation,” Eguchi recounted. “The funding for the commissions came mostly from a grant from The Boston Foundation, to whom I am very grateful for the recognition in the potential of this project!”

A majority of the participating composers are of Asian descent:  Kenji Bunch, Shaw-Pong Liu, Earl Maneein, Kareem Roustom, and Milad Yousufi.  “The eight pieces span as wide a range of styles and techniques as I can imagine… from the abstract to the conventional, meditative to enraged, and so much in between,” Eguchi described. “I didn’t set out to focus more heavily on the Asian American experience, but the five of Asian descent were such natural story tellers that they I knew that they would add so much to the project.”

For the Unaccompanied project, Portland-based composer Kenji Bunch created Ghost Mine. “This piece is commentary and reflection on the history of Asian race relations in Kenji’s home of the Pacific Northwest,” Eguchi said. “The title is in reference to the nearly forgotten 1887 massacre of 34 Chinese gold miners in eastern Oregon.”

On a related theme, Shaw Pong Liu composed Patch Work.  “This piece is an expression of outrage and grief at our American inability to curb gun violence,” Eguchi shared. “It demands a lot of both the performer and the audience.”

Two of the pieces are about place, including Anchorage by Afghan composer Milad Yousufi. “Anchorage was inspired by one of Yousufi’s own paintings, depicting an old Afghan man drinking tea,” Eguchi said. “It is a response to the Afghanistan of his youth which no longer exists, as well as Yousufi’s refugee experiences in the States, and the uncertain future in front of what remains in his motherland.”

Similarly, New York-based violinist and composer Earl Maneein created The Wandering.  “The Wandering is about Maneein’s place in the world, the US, NYC, himself,” Eguchi said. “He draws from his wide range of musical experiences, from his family’s Chinese and Thai roots through his professional life ranging from classical, to heavy metal, to Jewish wedding music.”

The fifth piece is Breviary by Massachusetts-based composer Kareem Roustom. “This work is based on the chants of the Shehimo Breviary, a liturgical book used for praying the canonical hours, in the Syriac Orthodox Church,” Eguchi elaborated. “Such music has been a source of peace for Roustom during recent times, and the work displays great strength and patience.”

Eguchi comes to the project with the enthusiasm of a professional string player who, unlike most, didn’t specialize in cello until he was almost a teenager.  “We didn’t have a lot of money, so my mom sometimes bartered her cooking for lessons,” he remembered. “I liked cello right away, but I have to admit, I hated practicing and rarely did much.”

But then a class made all the difference.  “Around early high school, my teacher assigned some music that connected with me, and gave me a tiny glimpse of how much more can be said through music than I was doing,” Eguchi recalled. “After that, I started to practice like crazy.”

Eguchi still had to find his own internal motivation.  “When I told my high school cello teacher that I was interested in auditioning for music schools and pursuing a career in music, she flat out said no, and refused to write me a recommendation letter,” he said. “She thought that it was too late to build the skills I lacked and I should do something else with my life.  My engineer father agreed with her, I might add.”

But Eguchi did not give up.  “I did what any obstinate knucklehead would do, and I worked hard and took all my auditions behind her back, and by the skin of my teeth got into a great music school at a university,” he said. “It turns out that everyone telling me that I couldn’t do it was exactly the chip on my shoulder that I needed to accomplish something. It may have been an accidental lesson, but it was honest and became one the greatest gifts she could have given me.”

This unusual path gave Eguchi ownership of his own musical journey.  “Since this industry puts such a weird value on youth and prodigies, being a late bloomer has had real life impacts on my career,” he said.  “But some few closed doors are worth having been old enough to have agency in my artistic and technical development.”

Part of the impetus for the Unaccompanied project was Eguchi’s experience of unjust treatment, which only worsened after 2016.  “I have lived many examples of half of my family receiving different sets privilege or abuse, but the thing that really sparked this project felt bigger than me, namely the national rise in anti-immigrant and anti-Asian sentiment over the last six or seven years,” he said. “It has been so difficult to hear of the public rhetoric used to demonize and marginalize people, but then to watch it play out with the terrible rise in hate crimes became too painful to sit on the sidelines.”

Eguchi reports that bringing this project to fruition hasn’t been without challenges, particularly due to the Covid-19 pandemic. “The original timeline was for this project was actually to have premiere in late 2020 or early 2021, but the pandemic disruptions really threw a wrench in the works,” he said. “Quarantine was so painful for everyone, but it was a full-on existential crisis for those of us who make our livings by gathering people together in a room and performing music for them.”

But now, his plans are back on track. “My wife Sasha Callahan, who is from Portland, and I co-founded an annual chamber music festival in Oregon, the Willamette Valley Chamber Music Festival, and thanks to that we actually spend a great deal of time in the Pacific Northwest,” he said. “That is one of the areas in the works to bring Unaccompanied next.”

From there, Eguchi plans to tour the nation.  “While there are many experiential throughlines, every immigrant community and neighborhood is so different,” he acknowledged. “As the project moves around the country, I will continue to work with local presenting organizations and community liaisons to listen to how Unaccompanied can benefit the local residents, and shine a light on their stories.”