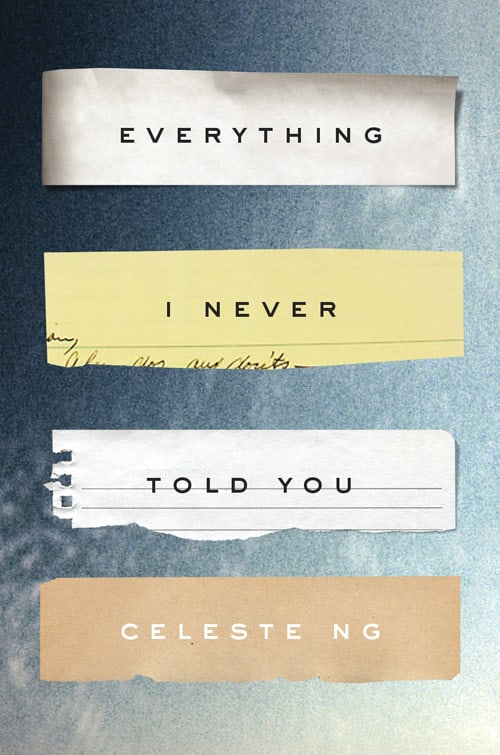 It’s a pleasurable thing to be welcomed into a novel with a simple sentence that nakedly declares its tragedy and reason for being: Lydia is dead. The reader’s attention is grabbed, and Celeste Ng in her debut novel, Everything I Never Told You, proceeds to ably lay the groundwork in the first chapter, establishing character and relationships, and alluding to the circumstance that is at the root of the tragedy that the family suffers—being “the other.”

After the first line, the omniscient narrator informs us that the family does not yet know that Lydia is dead, only that she is missing, and marks this fact with the documentary-like citation of time: 1977, May 6, 6:30 in the morning. It serves to anchor the reader in time and also to lend the story a sense of urgency.

But that urgency is resisted by the slow awakening of the family to the permanence of Lydia’s absence. The discovery of Lydia’s disappearance seems to unfold in stop-motion as her mother Marilyn moves in a state of bafflement at the sudden disorder of their world in which Lydia occupies the center. Early on, Ng defines the family dynamics. There is honey-blond Marilyn, who as a Radcliffe coed in the 1950s, endures isolation and condescension as the lone female in the science classes in which she excels. Her blueprint for graduation and medical school is scrapped when she meets and marries James Lee, a Chinese-American graduate student of American history who has endured the isolation and condescension of being the only Oriental (in the language of the day) at school and at work.

They bring their particular insecurities and collapsed dreams to their mixed-race union, which produces three children. There is observant Hannah, the youngest, whose yearning for connection manifests itself in small, unnoticed thefts of items belonging to other family members. There is aloof, studious Nath, resigned to his parents looking past him to the light and potential of Lydia, the middle child, who has her mother’s blue eyes.

During questioning by the police investigating Lydia’s disappearance, there is a crucial and stinging reference to the time that Marilyn went missing in the past and eventually returned home. And by the end of the chapter, we learn that despite what her parents believed, Lydia had no friends.

The novel must unravel the story of Lydia’s death. How had it begun? the narrator asks as the second chapter opens. The story of what happened to Lydia is also the story of what happened to the family, beginning with Marilyn and James Lee and the cultural and institutional sexism and racism that shaped their particular histories. In what is one of the stronger parts of the novel, Ng depicts the derailment of Marilyn’s dreams and the expression of her intellect by the sexist standards of the 1950s and her own empathic recognition of the socially unjust treatment of James Lee whom she marries, halting her college education and her desire to make her mark on the world. Likewise, in James’s story of growing up friendless and shunned among privileged white classmates, Ng nicely renders a character whose anger and shame are checked by a desire to fit in.

As Ng so effectively puts it: one wanted to stand out, one wanted to blend in. Marilyn and James invest these two aims in their the favorite child, Marilyn grasping Lydia’s potential to pursue the career that eluded her, James seeing Lydia as the kid accepted by her peers as he never was.

While believable, these characteristics become omnipresent as the novel progresses, at times flattening the story and subtracting from the characters’ dimensionality. As a result, there are instances when the story is riding on the surface rather than taking the reader to its depths.

Sometimes, it’s the omniscient narrator that pulls us away from the story, being overly explanatory, stating what the reader already knows from the scene. At one point, Ng gives us a lovely and very visual sense of Hannah’s frustration and her premonition about her sister’s intent. It’s a beautiful segue to Lydia’s action. However, the narrator’s declaration—Hannah was right—is superfluous and drains the powerful sentences preceding it of some of their impact.

Overall, though, Ng’s use of the omniscient point of view is smooth. The reader glides easily from the thoughts of one character to the next. Ng also creates a solid sense of the time period in the flashbacks, though it is less in evidence during the present day action of the story in 1977 when references to television programs and quick recaps of historical events are inserted as signposts rather than as intrinsic elements of the temporal landscape. In the scheme of the novel, these are minor concerns.

The book gains resonance at the end when Lydia, the focus of the story’s tragedy, is revealed more fully as a character, and there is a nice repetition of the question raised in the second chapter in reference to James and Marilyn’s story. Lydia, coming to grips with the deceptions and misperceptions to which she has somehow acquiesced, asks herself “Where had things gone askew?”

While Lydia and all the other characters seek the answer on an individual level, the larger story of racism and sexism looms throughout in Ng’s well-structured novel that invites readers in, guiding them confidently between past and present and persuading them to keep turning the page.