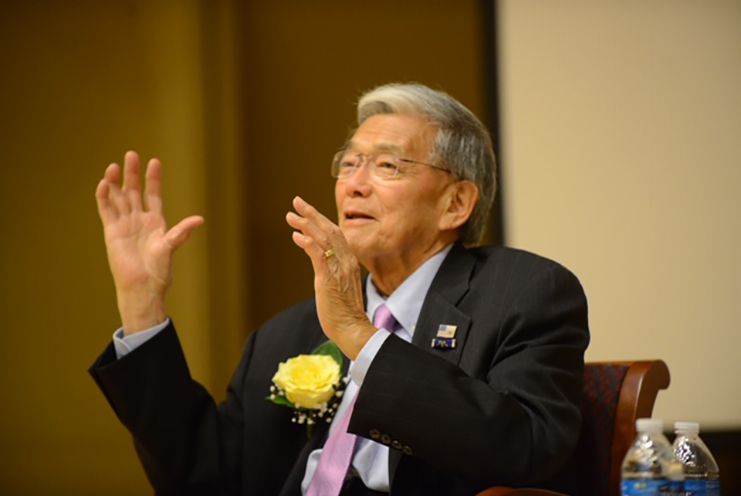 In two days, it would be his 88th birthday, but he didn’t tell them.

The crowd gathered in his honor at the University of Washington one recent Sunday didn’t need any more reasons to celebrate Norman Mineta.

After all, Mineta is an icon several times over. He broke barriers as an Asian American mayor, eleven-term congressman, and cabinet secretary under two presidents (a Democrat and a Republican), and received the Presidential Medal of Freedom.

Incarcerated as a child at the Santa Anita and Heart Mountain concentration camps, he became a leader in passing the 1988 Civil Liberties Act, granting an apology and redress to Japanese American incarceration survivors. As Secretary of Transportation on 9/11, Mineta’s leadership famously influenced President Bush’s public statements defending Muslims.

These highlights are ably covered in Norman Mineta and His Legacy, a documentary that premiered nationally on PBS last May. Director Dianne Fukami and co-producer Debra Nakatomi joined Mineta for a Nov. 10 screening at UW.

One anecdote describes how a young Mineta practiced jumping, every night, until he could start for his high school basketball team—as a 5’5” center. He’d use his jump-ball skills at every tip-off, only to be swapped out afterwards. “It was a try-hard story,” said his son David.

That’s the kind of Nisei Mineta was. He went to Santa Anita in his Cub Scout uniform, and never saw his dog, Skippy, again. To this day, he says camp never made him angry. But he remembers the racial slur painted on his garage after he was elected mayor of San Jose.

Once, when he was younger, he answered an ad for an apartment, which suddenly became unavailable when they saw his face. So he went to the corner and called from a payphone. Sure enough, it was available again. Even today, housing discrimination is something few are willing to confront. But that’s the kind of Nisei Mineta is.

Plenty of Nisei don’t talk about anger, which is one reason the recent passing of Hiroshi Kashiwagi, the laureate of Tule Lake, stings so much. But Mineta’s lack of “bitterness” made an impression on George W. Bush. In the film, he said, “I didn’t want our country to do to Muslims what we did to Norm.”

Not all of us fully appreciated Bush’s stance after 9/11, but Japanese Americans took comfort in Mineta’s presence in those crucial days. By 2014, when Fukami began the film, people weren’t as interested. “The nation was in a different place,” she said. “Things changed a lot, didn’t they?”

At the event, UW professor emerita Gail Nomura noted Mineta’s previous appearance at Kane Hall. In 2008, he gave the keynote for “The Long Journey Home,” a ceremony awarding degrees to over 400 Nikkei students forced to leave UW during incarceration.

This audience was distinguished, too. A message from Gov. Jay Inslee was read by Toshiko Grace Hasegawa, head of the state’s Commission on Asian and Pacific American Affairs. UW professor emeritus Stephen Sumida added a lighter note, bestowing Mineta with “The First Ever Matsutake Award for Community Service,” and a gift of the prized mushrooms.

“It’ll be the first ever award that I’ve eaten,” the honoree quipped.

Too timely. Recalling 1942, Mineta said, “It’s amazing how close we are today to experiencing something similar, and you wonder now what progress was made in all these years.”

“If it weren’t for Secretary Mineta,” Sam Cho said, “I wouldn’t be here.” In 2014, Cho got his start as a fellow with APAICS, the Asian Pacific American Institute for Congressional Studies, an arm of the Congressional APA Caucus. Both were founded by Mineta.

Cho, who was elected to the Seattle Port Commission that week, was eager to learn more about Mineta’s father, Kunisaku. According to the documentary, Kunisaku, who immigrated at 14 years old, accidentally got off the boat in Seattle, and spent another year and a half working his way down to Salinas. After the screening, Mineta wondered if current administration would have let him in.

I wanted a chance to speak with Mineta, but the line at the reception was long. It had been long earlier, too—in the lobby beforehand, and the auditorium after. I considered leaving but was shamed by his stamina. In one of the film’s lighter moments, Mineta chats up strangers at the San Jose airport that bears his name—clearly, he draws energy from talking with people.

Once, I thought my chance had come, until the Secretary’s attention was suddenly drawn by an older man in a military cap. It was Veteran’s Day weekend. I stepped back.

As it happened, the veteran, Alan Yabui, was a retired professor. “It’s important that people remember the past, and the sacrifices people made to make America great. It’s not only the president,” he told me, laughing. “It’s the people, and the freedom.”

Eventually, my turn came. “History has an unfortunate practice of repeating itself,” Mineta told me, “so we have to focus attention on what happened, to make sure that something like that never ever happens again.”

Stop repeating history. Never again is now. These days, the same note is being struck by activists. Tsuru for Solidarity, a direct action group, just announced a mass pilgrimage to DC next June, calling for an end to camps targeting immigrants and refugees.

The hard truth is that incarceration sowed divisions between Japanese Americans that still persist. Nevertheless, we are coming together.

At 88, Norman Mineta’s voice has a rasp to it, but it’s as strong as ever.

The final day at the Viet-Wah Supermarket

Theresa Fujiwara: lessons from a lifetime of social justice work