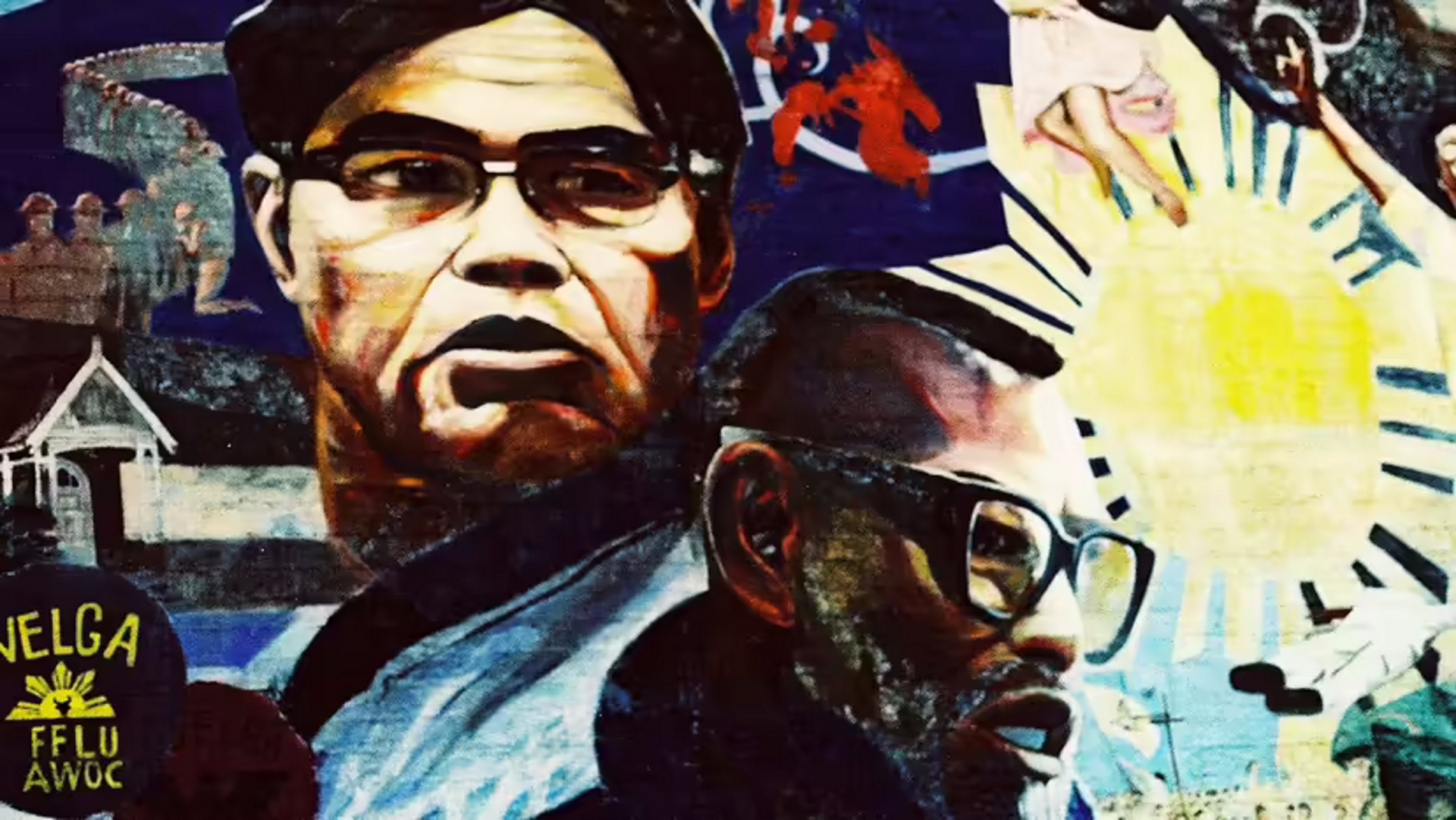 Filipinos are the second largest Asian Pacific Islander group in Washington state. This year, the Filipino American National Historical Society (FANHS) established “1946: A Turning Point” as its theme, marking the 70th anniversary of the 1946 laws that brought us the Filipino American community that we know today.

Dr. Dawn Mabalon, Associate History Professor at San Francisco State University and FANHS National Scholar cites four significant historical markers in 1946 for Filipinos: the implementation of July 4, 1946 Philippine Independence as planned in the 1934 Tydings-McDuffie Act; the Luce-Celler Act, the 1946 Alien Fiancées and Fiancés Act, and the 1946 Recission Act. To fully appreciate these events, let’s go further back in history.

The Philippine archipelago has 7,100 islands with more than 120 languages on record, and numerous ethnic cultural groups. The Philippines has been colonized by Spain, China, Britain, and the United States with numerous rebellions on record. After 300 years of colonization, the Katipunan was formed by 27-year-old General Emilio Aguinaldo. In 1896, the multiple-province coordinated rebellion was prematurely launched when the plan was discovered by the Spaniards. Katipunan lost and the leaders were exiled to Hong Kong in 1887.

In 1898, on the other side of the world, the Spanish-American war broke out over the brutal suppression of a Cuban rebellion. In that same year, Commodore George Dewey annihilated the Spanish Pacific Fleet in Manila Bay. Gen. Aguinaldo made arrangements with the United States to return to the Philippines and liberated towns south of Manila. He declared Philippine independence on June 12, 1898, establishing a provisional government and drew the first democratic constitution in Asia. On February 2, 1899, U.S. and Philippine forces skirmished. Two days later, the United States signed the Treaty of Paris, purchasing the Philippines from Spain for a mere $20 million, starting its colonial empire.

The Philippine-U.S. War broke out in 1899. The United States sent 65,000 soldiers to suppress the Filipinos, resulting in the death of 4,200 American soldiers, over 20,00 Filipino combatants, and as many as 200,000 civilians, who died from violence, famine, and disease. (The U.S. toll from the Spanish American Was was around 400.) The 3-year war ended in 1902 with the United States taking over governance of the Commonwealth of the Philippines as one of its territories, along with Hawai‘i, Guam, and Puerto Rico.

From 1902 to 1934, Filipinos were able to come to the United States as “nationals.” They could come and go freely to the United States and in the Philippines. They were exempt from the Immigration Act of 1924 including the National Origins Act and Asian Exclusion Act. The latter limited the number of Asian immigrants to the United States to 3% of the number of people from an Asian country who was already living in the United States based on the 1920 U.S. Census. The percentage was lowered to 2% for the 1980 census. The United States restricted immigration from southern and eastern Europeans, severely restricted African immigration, and banned Arab and Asian immigration in order “to preserve the ideal of American homogeneity. There was” no limit to Latin American immigration. Filipinos came as “pensionados” (academic scholars), sugar cane plantation workers to replace Chinese and Japanese in Hawai‘i, and seasonal farmworkers and cannery workers. Of note were Filipinos who were heavily recruited to work in Hawai‘i in the sugar cane plantations numbering up to 100,000 to perform brutal low-paying and back-breaking work.

Filipinos now spoke their own language and English was a required class in the 1902 U.S. instituted public school system. The Spanish language was no longer required to be learned. I can only surmise that the ability to speak English led many to settle outside traditional Chinatown areas.

Dr. Mabalon highlighted the key events and laws that affected Filipino status in the United States.

From “Nationals” to “Aliens”

In 1934, the Tydings-McDuffie Act was passed. Congress promised the Philippines total independence in 10 years. Filipinos who wanted to immigrate were now reclassified from “nationals” to “aliens” with a quota of 50 immigrants per year. They could not become citizens under the 1790 Naturalization Law, which excluded non-whites from becoming citizens and barred land ownership under the Alien Land Laws in Washington and California states. Note that locally, Pio De Cano Sr. sued and won the right to own property based on the fact that Filipinos had not been “aliens,” but foreign “nationals.”

During World War II, from 1939 to 1945, U.S. racial sentiments were suspended when the Philippines became a key ally against Japanese imperialism as part of the Axis powers. Filipino aliens living in the United States were recruited into segregated U.S. Army Units, the First and Second Filipino Infantry Units. 10,737 of those who served were granted U.S. citizenship and GI benefits. Many met and married Filipinas in the Philippines during their service. The passage of the 1945 War Brides Act allowed entry of their spouses and children.

The 1934 Tydings-McDuffie Act also promised full GI benefits to 200,000 Filipinos in the Philippines who were recruited and fought under the U.S. Armed Forces of the Far East (USAFFE) and the Philippine Scouts. However, in March 1946, racism reared its ugly head and the 1946 Rescission Act was passed, which reclassified the military service of Filipinos in USAFFE and Philippine Scouts as “inactive service.” It took three decades of advocacy in the Philippines and the United States to address this inequity. In 2009, President Obama signed a bill granting said veterans a one time payment of $15,000 ($9,000 if they are living in the Philippines) compensation, a mere drop in the bucket for the value of the GI Bill. Today, advocacy continues for the U.S. immigration and reunification of their family members. Retired General Antonio Taguba leads the campaign to award Filipino veterans with the Congressional Gold Medal, similar to the successful efforts for Japanese Americans and Puerto Ricans.

A Pathway to Citizenship and Reduced Immigration

On July 2, 1946, the Luce-Celler Act was passed to grant Filipinos who came before March 1934 access to citizenship through naturalization. The Act also gave access to naturalization to Indians and limited Filipino and Indian immigration to 100 per year.

1946 was also a watershed for sugarcane plantation workers. 6,000 Filipinos and Filipinas were recruited to supplement the labor shortage, when in fact they were to act as “scabs” with the looming strike by the International Longshoreman and Warehousemen Union that included 20,000 Filipinas and Filipinos, locals, and Asian immigrants. The newly arrived joined the Great Sugar Strike of 1946 to win union recognition, higher wages, job rights, political freedoms, pensions, homeownership, and end the white supremacy and paternalistic cultures of the plantations.

The 1960s immigration of professionals and the Philippine government policy advocating for Filipinos to work overseas brings us to our sizable population today bringing up the question of civic voting power.

I hope you can understand why Filipinos have mixed feelings about the United States. Many came to work and go back home. Our children who are born here are here to stay and we fight for civil rights for our children collectively. I find the lower than average assessments of Filipino voting activity questionable. Filipinos have Spanish and Chinese last names. Their votes can be easily attributed to Latino and Asian civic engagement. Case in point, the Filipino American Political Action Group of Washington conducted a pilot to review King County voters who were identified as Latinos. They found 300 Filipinos in a 4 hour review session. More importantly, loyalty to the motherland can now be sustained with dual citizenship—you can be both as U.S. citizen and a Philippine citizen.

Regardless, the truth is that laws are made by the elected officials and citizens elect said lawmakers.

We all need to elect those leaders who are not against us immigrants and children of immigrants. October is Filipino American History Month. We have a choice to make these presidential elections be another turning point. Our call for action is for all of us to make history this November. Be the Turning Point: Vote this November 8. 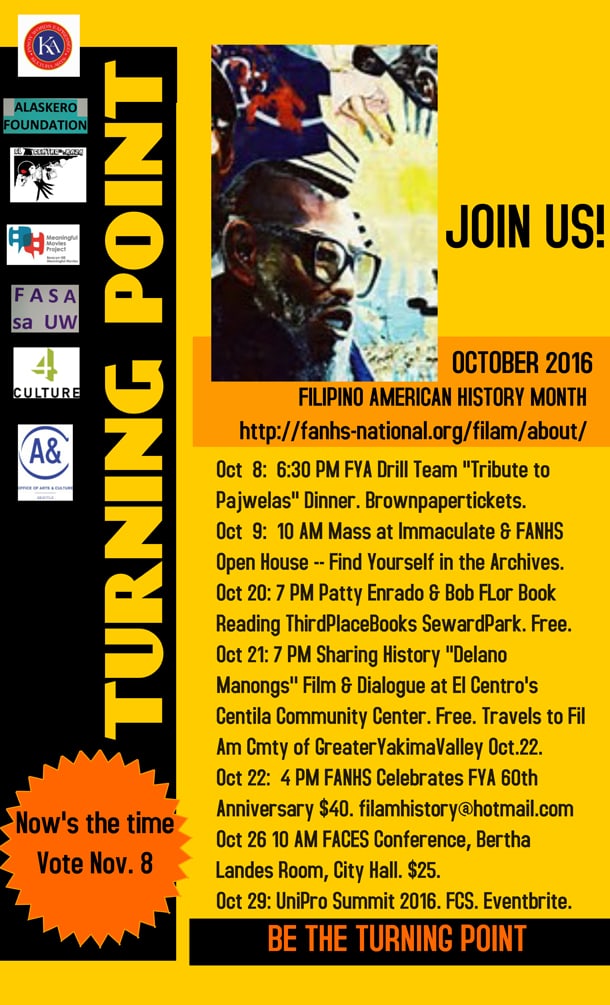 Maria Batayola is a long time local community and equity activist. She is a dedicated member of FANHS National and serves as FAPAGOW President.