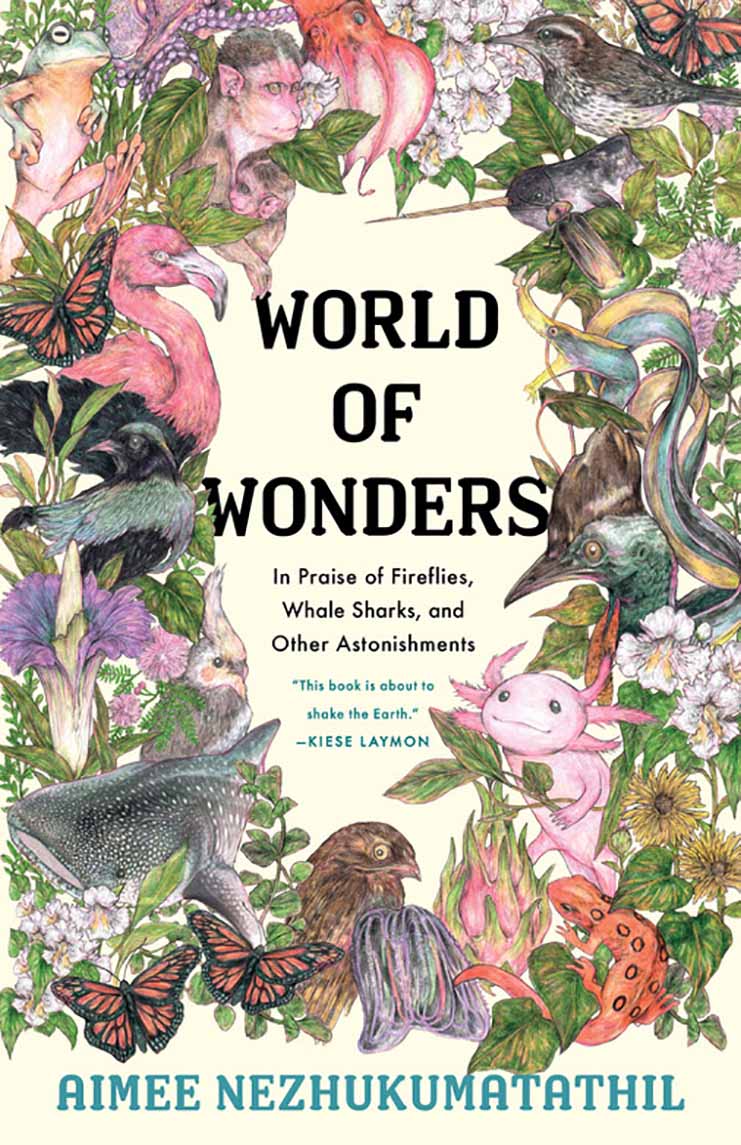 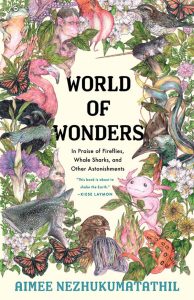 World of Wonders: In Praise of Fireflies, Whale Sharks, and Other Astonishments by Aimee Nezhukumatathil is a New York Times Best Seller, a Barnes & Noble 2020 Book of the Year, and an NPR Best Book of 2020. Nezhukumatathil is a poet with four previous poetry collections: Oceanic (Copper Canyon Press 2018), Lucky Fish (2011), At the Drive-In Volcano (2007) and Miracle Fruit (2003), the last three from Tupelo Press. Her most recent chapbook is Lace & Pyrite, a collaboration of epistolary garden poems with the poet Ross Gay. Her writing appears twice in the Best American Poetry Series, The New York Times Magazine, ESPN, Ploughshares, American Poetry Review and Tin House.

World of Wonders is an essay collection that glimmers like childhood: it’s a sunny trip to the zoo, ice cream in hand; it’s curling up in a cozy nook of the library; it’s going through old photos and remembering all the reasons to smile; it’s a friend’s hug. In each essay, Nezhukumatathil takes a plant, animal, or natural phenomenon and connects it to an observation of the human condition. The essays and their starring creatures reflect the variety of places Nezhukumatathil has traveled, from Kerala, India and Thasos, Greece to Singapore and Chicago, Illinois.

Most of the essays begin with a gorgeous illustration by artist Fumi Mini Nakamura, with fine linework, minute details, and muted colors reminiscent of a vintage children’s encyclopedia. The illustrations spark the imagination, mesmerizing us with the fluid coils of the octopus’ tentacles, sheltering us under the giant heart-shaped leaves cascading down the Catalpa Tree. Nezhukumatathil also adds to the encyclopedia-feel by providing the scientific names of her subjects, offering a small treasure hunt in the opportunity for outside research for the diligently curious reader. Translating the Latin and Greek names uncover whimsical gems such as Nymphicus Hollandicus, the “New Holland Nymph,” and Vampyroteuthis Infernalis, the “Vampire Squid from Hell” (although the Corpse Flower’s scientific name, Amorphophallus Titanum, might be better left for more mature readers).

Despite its comfort-read quality, the book delves deeper than a surface-level delight: core to each essay is some harder truth from Nezhukumatathil’s life experiences as a Filipina-Indian American. It’s refreshing to read an Asian woman’s voice in this intersection of the outdoors industry and scientific community, to see these essays tackle issues still largely unrecognized by the two traditionally white- and male-dominated spaces. She calls on the natural adaptations of her fascinating plants and animals almost like superpowers. She survives racism with the axolotl’s smile. She searches for home and belonging just as the red-spotted newt does. The shocking pink of a flamingo’s feathers becomes a story of misogyny and violence against women. And we feel her fear when her son’s offhand comment about practicing shooter drills at school pierces into their morning bird-watching like the bang of a hunting rifle.

In paralleling her own life with each of the book’s subjects, Nezhukumatathil does more than give us interesting animal facts and tell the reader about herself. She reminds us that we are each integral to, and inseparable from, the natural world – that many things we think of as “human problems” are shared with the rest of nature. Interwoven in the child-like wonder is an adult self-awareness of the impact humans have on the environment, and a poet’s awe of the impermanence of all things. The flora, fauna, landscapes, and weather around us won’t be here forever – more and more disappear every day. It’s in our power today to make sure these precious things are around for our loved ones to delight in. And like all forms of creation, the memories we make are wonders too, for us to decide if we will honor them, preserve them, and share them long into our future:

“I know I will search for fireflies all the rest of my days, even though they dwindle a little bit more each year…They blink on and off, a lime glow to the summer night air, as if to say: I am still here, you are still here…Perhaps I can will it to be true. Perhaps I can keep those summer nights with my family inside an empty jam jar, with holes poked in the lid, a twig and a few strands of grass tucked inside. And for those unimaginable nights in the future…I will let that jar’s sweet glow serve as a night-light to cool and cut the air for me.”