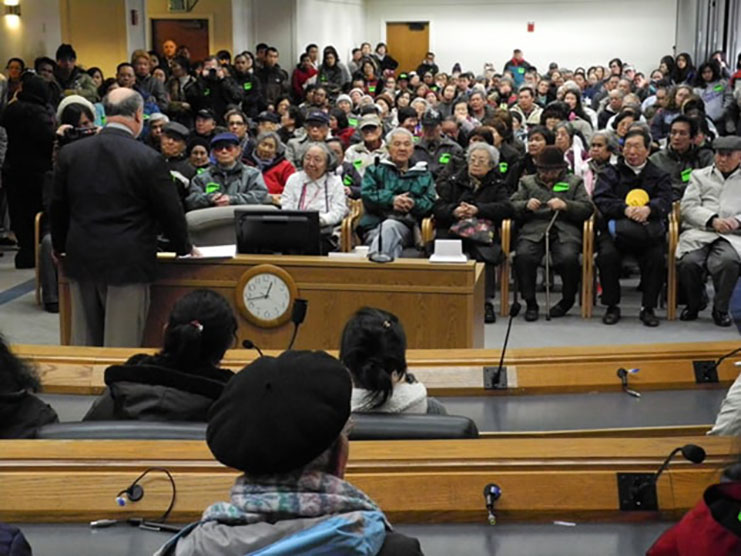 The Commission on Asian Pacific American Affairs (CAPAA) celebrated its 45th anniversary with a trail of accomplishments that reflect strong community building efforts and pan-Asian sensibilities focused on civil rights and justice, education, health and human services, and economic development.

Their goal is to ensure that the voices of the 12-member CAPAA commissioners were heard as they articulated the needs and wants of our Asian Pacific American (APA) diverse communities across Washington state. They advise sitting governors on the best way to respond to the issues of their times.

Diane Mei Wong was the second CAPAA ED serving from 1978-1980. She credited the first ED Mitch Matsudaira (1975-1978) with establishing the credibility of CAPAA. He educated government leaders and the public on the challenges facing API communities and busting stereotypes that APIs have no problems and they don’t have complaints. Wong continued Matsudaira’s work, a steep climb given the attitudes of the times and the size, complexity and bureaucracy of Washington state government.

Wong also worked with the Latino community and their lobbyists to pass the first Transitional Bilingual Education Act. “This gave non-English and limited-English speaking students a chance to acclimate to English instruction so they can keep learning.” Wong also helped establish the Asian American Studies program at Western Washington University with its advocates, the Japanese American Citizens League. She prevented legislators from passing a new Alien Land Act through education. The proposed bill would prohibit the Japanese from owning agricultural and valuable lands, a throwback to the 1920’s Alien Land Act that prohibited the Chinese and other non-citizens from owning land. The Act was appealed in 1966.

The late 70’s and 80’s saw the massive influx of Southeast Asian refugees, at times referred to as the “Boat People” from the Vietnam War. ED Liz Dunbar served from 1980 to 1981. She recalled “They were arriving in large numbers and the state agencies and community organizations were not prepared to serve them. There was a large opposition to having more refugees accepted in Washington…We pushed DSHS to elevate the refugee resettlement program and add more resources. We also advocated for a more welcoming community…” Note that the coming of the SE Asians expanded the definition of APA.

From 1981 to 1984, ED Vivian Luna continued to advocate for SE Asians which now include the Hmong. She co-advocated for the Indo-Chinese Farm Project that translates the refugees’ farming skills to small businesses as an economic development initiative. Further, CAPAA actively shared the 1980 Census Data on Asian Pacific Americans (APAs) with the state and other government agencies. This ensured that the human services, education, business and economic development needs of the APA communities are understood. The most difficult challenge of Luna’s time was reversing the sunsetting of CAPAA. Luna walked a very fine line of legislative advocacy and lobbying through the Friends of the Commission. ED Meibeth Bustillo served thereafter, focusing on education.

From 1989 to 1993, ED Patricia Lee continued to advocate for language and culturally appropriate services to immigrants and refugees. This was marked with the passage of a bill requiring court interpreters to be certified. “We worked with the Office of Court Administrations, the Commission on Hispanic Affairs to help ensure that defendants were provided with professionally trained interpreters so that their rights were not compromised by language barriers.” CAPAA worked with community groups such as Minority Executive Directors Coalition and REWA to bring attention to and address community issues since many state policy makers and legislators believed the model stereotype of the APA community.

From 1993 to 1999, ED David Della served when Washington state was looking at major reforms in education, welfare and health care. The passage of I-200 made addressing inequities more complicated. It prohibited public institutions from discriminating or granting preferential treatment based on race, sex, color, ethnicity or national origin in the areas of public education, employment and contracting. CAPAA and APA communities across the state attempted to stop I-200 prior to its passage. Once passed, CAPAA and community leaders developed two organizations – APACE (Asian Pacific American Civic Engagement) to address electoral matters, and APIC (Asian Pacific Islander Coalition) to address access to language and culturally appropriate human services. APIC organizes the annual API Legislative Day bringing thousands of API community members from various parts of the state to educate legislators on the community needs and get their support.

I-200 continues to have a chilling effect on government efforts to address inequities. ED Ellen Abellera served from 2003 to 2009. She held two Diversity Business Summits to stimulate minority and women owned businesses get certified to access state funding and contracts. During her tenure, she helped initiate the Achievement Gap study to identify barriers to students of color school performance. She hosted the 2005 Heath Disparity Summit resulting in the establishment of Gov. Gregoire’s Interagency Council for Health Disparity with Senator Rosa Franklin’s leadership. ED Kendee Yamaguchi shortly served thereafter.

From 2013 to 2018, ED Michael Itti served at CAPAA. Itti reflected that “The APA population has grown tremendously… The practice of lumping APIs in one data category hides the unique needs of our communities. Through the efforts of Rep. Sharon Tomiko Santos and the Educational Opportunity Gap Oversite and Accountability Committee, Washington state is at the forefront of API data disaggregation.” In addition, the Marshallese community members were suffering from health disparities because of the impact US nuclear testing in the Marshall Islands, and the lack of access to health care. CAPAA’s work resulted in the creation of the COFA Islander Health Care Program in 2018.

This brings us to the 10th CAPAA ED Toshiko Grace Hasegawa. With the recurring anti-immigrant sentiments, pursuit of equity, continuing quest for culturally and linguistically appropriate service, and the critical need to disaggregate data, Hasegawa and the statewide CAPAA Commission, APACE and APIC, the trail of accomplishments for the APA community continues.

CAPAA could not have had a trail of accomplishments without the Commissioners. From the Coalition of Concerned Asians to CAPAA, we look forward to the 50th golden anniversary next year