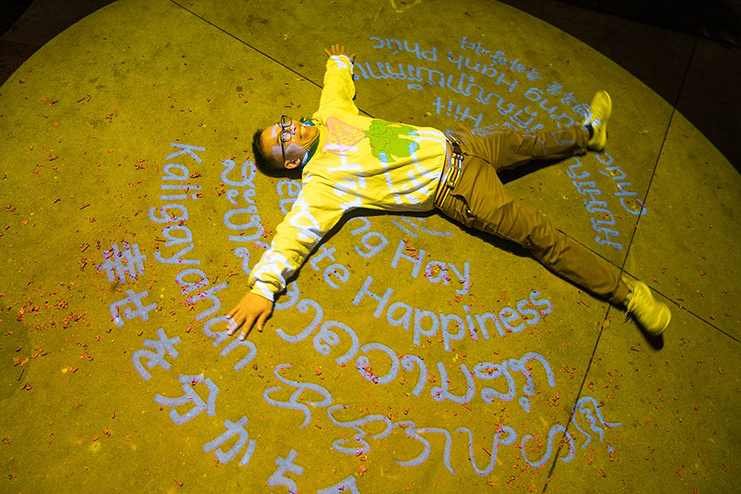 During the community engagement process for the Hing Hay Park expansion between 2013 and 2016, the CID community expressed a desire to have an artistic signage to communicate the name and meaning of Hing Hay Park. Translated into English, “Hing Hay” means “celebrate happiness.”

After the expansion was completed in 2017, the Friends Of Hing Hay Park facilitated a request for qualifications process, and local artist George Lee was hired to design and build a public art piece for Hing Hay Park.

Throughout 2018, George, SCIDpda, and the Friends Of group conducted a comprehensive community engagement program that resulted in the final design, inspired by a sky lantern.

The design is an eight-sided aluminum red lantern with bright yellow signage and gold trim. On three faces primary text is displayed, each on one face: 慶喜公園, Hing Hay Park, and Celebrate Happiness. On two panels, adjacent on each side of primary text panels, are additional languages of communities within the CID. At night, the lettering is illuminated, and all of the same languages are projected below the lantern on the ground below.

This was an exciting collaboration between artist and community to showcase the festivity of the Park’s name for all to understand and appreciate in different languages, and in the sculptural, illuminated interpretation form of a sky lantern.

This event was sponsored by Seattle Parks and Recreation. This project is funded by the Seattle Office of Economic Development and administered by SCIDpda.

All photography is by Ronn Meriales.