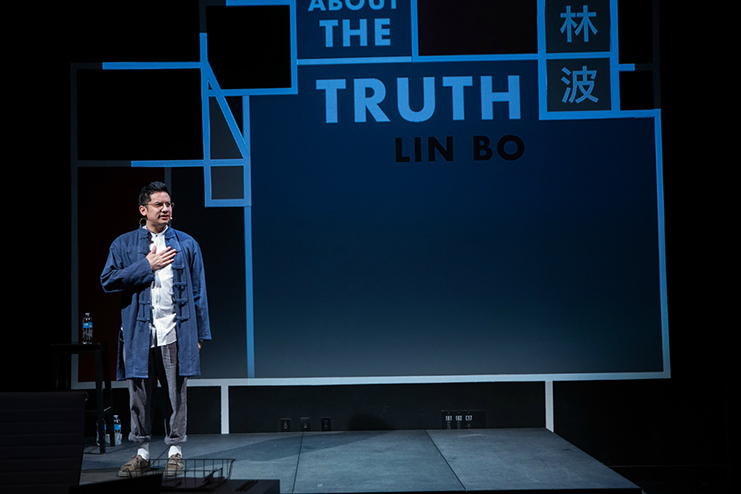 The structure of Christopher Chen’s play Caught has been described as a series of Russian dolls, or as an ever-peeling onion, in which each layer dives deeper into a realm of new discoveries. This month, Intiman Theatre delves into this work which blends art exhibit and theatre, truth and performance.

The artists involved in this production are enjoying the ride on which this play takes its participants. “I was initially intrigued by Caught because of how it defies expectations on how you witness and connect with a play,” said actor Narea Kang, who plays the role of Wang Min. “This play keeps everyone, especially the audience, on their toes.”

Costume designer Natalie Shih agrees. “When I first read this piece, I fell into the trap of assuming everything is what it presented itself to be,” she said. “Each scene surprised me, bringing to attention another aspect of our relationship with truth.”

The entryway into this play is the artwork of fictional Chinese dissident artist Lin Bo, but the questioning of Bo’s story of his prison experience only leads down a rabbit hole to further questions about all of the characters in this play.

And Kang’s character, Wang Min, who, like Lin Bo, is also a multi-disciplinary artist and activist, is no exception. “She is this ever-changing force, so just when you think you got her figured out she surprises you with another element,” Kang said.

This dynamic can be a bit dazzling for both the performer and the audience. “The biggest challenge was making sure that I fully understand the ideas and principles that Wang Min presents in the show and making her almost other-worldly intellect understood,” Kang said. “She presents a lot of challenging and stimulating ideas in rapid-fire, so we spent our earlier rehearsals delving into those, because only after I fully understand what Wang Min is saying, will I be able to convincingly relay it back to the audience.”

Shih likewise finds that the play’s journeys placed unusual demands on the costume designers. “The biggest challenge I faced was navigating the constant shift in tone,” she said. “The reveal of another layer after every scene was an opening to make a statement about character.”

All this is intended to explore the nature of truth and how we determine and decipher authenticity. “The fascinating thing about this play, for me, is the untraditional techniques of storytelling involved,” said lighting designer Reed Nakayama. “The play actively tries to break the comforts of theatrical conventions and makes for a surprising experience.”

That makes the design elements just as vital to the production as the acting. “Lighting is a truly magical form of design. It has the capacity to shape and alter the theater space in very drastic, sudden, and dramatic ways, pushing and pulling the focus of the audience and making an ugly setting beautiful, and vice versa,” Nakayama said. “Along with sound design, it acts as the embodiment of the environment, using elements of weather, color, and intensity. It is a means of playing the stage and scenery as a character.”

But Nakayama reports that relying upon typical staging principles only confounded the artistic team during the rehearsal process. “The second edge to the sword that is untraditional theatre is that all the instincts developed from using the same conventions every time will work against you,” he said. “To achieve something that feels new, you have to break your tendencies and spend a lot of time exploring and changing.”

That has made the preparation for this production strangely parallel to the play’s own narrative. “The process for this show has been in constant flux, and each revision of the design was a complete upending of the previous version,” Nakayama said. “It has been a lot of work, a lot of back-bending, but along the way we have found some incredibly interesting moments that I don’t think any of us could have imagined by ourselves.”

All of this back-bending, as Nakayama calls it, is not simply an aesthetic exercise, but rather is intended to interrogate history and the ways in which we construct and disseminate it. “We did a lot of research into Chinese artists of the last thirty years and it was very interesting to see how different artists navigated their methods of expression under a heavily censoring government,” Nakayama said.

Actor Narea Kang emphasizes that we now live in “a world of fake news and alternative facts,” in which a bona fide truth may consist of both dry facts and the elusiveness of traumatic experience – as well as different artistic perspectives on how to convey these truths.

Nakayama notes that these approaches often vary based on age. “There seems to be a generational divide among the current Chinese artists, where younger artists do not seem interested in politics, and tend more towards abstract art,” he said. “The old guard, avant-garde, see them as cowards, while the younger see the older artists as pandering to Western audiences who feed on a specific, expected narrative.”

So how do we ultimately locate truth? “I don’t take a side on this,” says Nakayama, “but I find it interesting that perhaps the only story you hear may be the story you wanted to hear, and it’s not just confirmation bias, but hunger for a story, a market for the narrative, that drives what ‘truths’ you take in.”