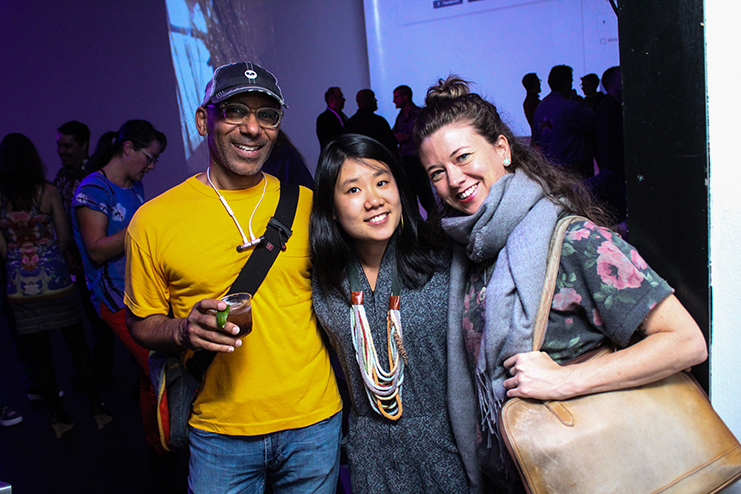 In the fall of 2018, the International Examiner talked to filmmaker and writer Vivian Hua, who had just taken on the role of executive director of Northwest Film Forum. Two years later, we catch up with Hua to talk about her work in both the arts and in social justice.

Hua has long been a multi-disciplinary artist, engaging in filmmaking, photography, and storytelling. “I’ve always been a Jack/Jill of All Trades,” Hua said, “probably because I don’t really have much formal training in anything and didn’t grow up with the understanding that you could be an artist for a living!”

Despite the pressure to focus, Hua has found this diversity of practices to be an asset. “Perhaps at some point I thought it was problematic to have so many hobbies,” she recalled, “but the older I get, the more I think that embracing a diversity of interests actually complements the way I interface with the world.”

Hua’s resume, and website (https://vivianhua.com) is filled with a wide range of visuals and written work. “My creative practice very much ebbs and flows with my personal whims and tendencies,” she said. “I frequently pursue opportunities as they arise or as they are presented, because I’ve learned that even when I lay out some sort of robust plan, life generally has different plans for me.”

A prime example of this is Hua’s recent work on a comedic web-series called Reckless Spirits, which was slated for production in 2020. “The pandemic definitely put my entire Reckless Spirits project on hold,” she said. “The main positive creative thing that has happened during the pandemic is that it jumpstarted my desire to get my long-standing magazine, REDEFINE, back off the ground.”

It’s understandable that the social restrictions of the current COVID-19 pandemic have drawn Hua back to a more solitary art form. “The one creative constant in my life is writing,” she said. “It’s ever-present, and by far the easiest and most natural thing for me to do.”

Writing has also been Hua’s pathway to her work in more public realms. “It’s the artform that first taught me the importance of creation, and that creation could be potentially life-saving and life-affirming,” Hua said. “It’s because of my own experience with writing as a healing salve that I am at all interested in creating access points for others to create.”

This interest brought Hua to Northwest Film Forum. “At age 30, I started the transition from doing all the other things I did to filmmaking because I had a sort of ‘voice of God’ Burning Bush moment that prompted me to believe that I needed to write and direct films, even when it is something that I had never in my life considered before,” she said. “I was planning on moving to New York, and had an apartment lined up and everything, before I got a job offer at Northwest Film Forum.”

And this new direction dovetailed with Hua’s political activism. “I have the great fortune of working at an organization that is fully aligned with my sociopolitical beliefs, and thus, I have the great luxury of pairing my personal activism work with my institutional duties,” she said. “I very much believe that the personal is political, and it is really important to me that the work I do for money is aligned with my goals of doing good in the world.”

This alignment was exemplified during the Capitol Hill Occupied Protest (CHOP) in the summer of 2020. “Northwest Film Forum definitely became a bit of a ‘safe house’ or ‘safe space’ for grassroots journalists who were on the ground,” Hua said.  “When our Black friends and their allies are caught in the midst of such physical danger in a time when emotions are already so heightened, a space to rest can be huge and make a significant difference for one’s mental health.”

After CHOP was dismantled and protests became more dispersed across Seattle, NWFF has continued to support its community. “Presently, our lobby is the headquarters for a mutual aid station for houseless and under-resourced people within Cal Anderson Park,” Hua said. “We also recently established a COVID-19 Artist Relief Fund in partnership with the Andy Warhol Foundation for Visual Arts and their Regional Regranting Program.”

This work illustrates Hua’s inclination toward facilitation. “My organizing work tends to be more behind-the-scenes,” she said. “I am not exactly a frontlines person, but I will happily connect people who are on the frontlines to the things that they need.”

This has placed Hua increasingly in a position of leadership. “I wouldn’t say I’m an expert on equity, diversity and inclusion,” she demurred. “But the fact of the matter is that there are so few leaders of color, especially in the arts and film space, that one becomes an expert by default.”

And writing always remains a key element. “I also share a lot of timely information, plus anecdotes, perspectives, and conversations which a lot of people don’t get to witness, especially with the mainstream media being as skewed as it is,” Hua said. “That may hardly seem like organizing work at all, but when you an avid social media following, the ripple effects around that can actually do a lot.”

Hua is also well-placed at NWFF to make waves in the medium of film. “I’m currently editing a music video which is using substantial footage from the Chicago Race Riots (1919), Tulsa Race Riots (1921), and the March on Washington (1963), then inter-splicing footage from 2020 BLM protests,” she said. “There has been some good progress this year with the BLM movement and more people awakening than before. It just never ends and never really changes enough.”

The COVID-19 pandemic has only compounded Hua’s challenges at NWFF. “I think the biggest challenge of my past two years at NWFF is something that you will hear many executive directors talk about, which is that crises and complications happen on all sorts of scales and scopes, and there is nothing to really adequately prepare you for the level of knowledge you are expected to know,” she said. “The life of a traditional executive director is, in my opinion, unreasonable. It makes work-life balance difficult for many, and that’s not healthy.”

But Hua is grateful to enjoy some balance at NWFF. “One of the most important things I’ve learned, and which I deeply believe in, is that leadership needs to be more horizontal, in general,” she said. “I don’t believe in the idea of worshipping one person at the top, and I am fortunate enough to work on a leadership team alongside my managing director, Chris Day, and artistic director, Rana San.”

This trio has had their hands full in 2020. “COVID-19 is proving that an organization’s ability to stay fluid and adaptable is a huge asset, especially in times of societal and economic uncertainty,” Hua said. “Everyone wants to be a bigger organization and do more all the time, in part because I think we are trained to believe that bigger is always better. I think the perfect balance might be maintaining a size that allows you to be nimble when necessary but also able to accomplish the things you want to accomplish.”

And Hua definitely has a list of those aspirations for the future. “I definitely want to make feature films,” she said – but that’s not all. “I am about to begin a one-year online certificate at UC San Diego around Sustainability and Behavior Change,” she added.

This new learning venture has the potential to bring together Hua’s passion for visual and written communication with yet another urgent issue of social justice. “The program is a mixture of psychology, conservation and community engagement,” she said. “Environmental issues have long been important to me, but we need to start moving as a society on it before it’s too late.”