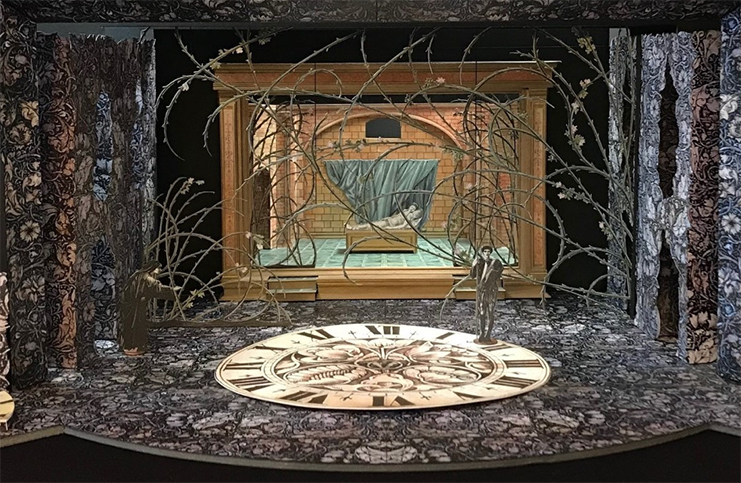 Set design for the theatre typically resides on stage, but beginning on February 11, the Portland Chinatown Museum will soon host the exhibit Carey Wong: The World Transformed. Wong has worked as a stage designer for over 45 years, and the Portland exhibit will be a retrospective that, itself, is designed like a theatre set.

The idea to showcase Wong’s life’s work arose while he was working on a permanent exhibit for the Portland Chinatown Museum entitled Beyond the Gate: A Tale of Portland’s Chinatowns. “Jackie Peterson Loomis, the exhibit’s curator and founding executive director of the Chinatown Museum, heard about me from someone in Portland, and she tirelessly pursued me until I agreed to design the exhibit,” Wong said. “I am so glad I agreed to do it.”

Wong’s talent in the theatre translated well to portraying Portland’s Chinatown in the museum setting. “From the outset, Jackie wanted the exhibition design to be dramatic,” Wong recalled. “She wanted to evoke different moods as the viewer walked through the installation.”

The Chinatowns installation included a variety of historical milieu, from dry goods store, to restaurant, laundry, herbalist, and gambling parlor. “I used tinted historic photographs as the background for each so that there would be a visual context to the objects on display, and we got lighting designer Geof Korf from UW’s School of Drama to create atmospheric lighting for the exhibit,” Wong said. “So, doing the exhibition design was like designing a theatrical set.”

Wong felt a personal connection to the exhibit on a social as well as professional level. “I was able to reconnect with friends and colleagues whom I hadn’t seen since my high school days,” he said. “It was a real coming home and a chance to reconnect with my Chinese heritage.”

Following the success of Beyond the Gate, Wong and Loomis began planning for to showcase Wong’s work. “The last exhibit of my work was in the mid 1990’s when a group of my scale models with text panels toured the U.S. in an exhibit entitled Recreated Worlds for five years sponsored in part by the National Endowment for the Arts,” Wong remembered. “It seemed to me that The World Transformed could also be an exhibit of scale models of set designs since many people are fascinated by miniatures.”

The exhibit will include 16 models that cover a 40-year span. “The earliest is the Don Giovanni I designed for Portland Opera,” Wong said, “and the most recent is a show I did for the Seattle Repertory Theatre in 2020 that was cancelled due to the pandemic.”

This journey back in time takes Wong to his earliest memories of the stage. “I think I became aware of set design from movies like The Wizard of Oz or some of those almost surreal Busby Berkeley production numbers in 1930’s musicals,” he said.

But it wasn’t until his senior year of college at Yale that he had the opportunity to devote independent study to a single project. “I produced, directed, and designed a 17th-century Stuart court masque written by Ben Jonson entitled Newes from the New World Discover’d in the Moone,” he reported. “With that, my interest in theatre design was unleashed.”

Wong’s further training was sporadic. “I attended the Yale School of Drama, now called the David Geffen School of Drama, for only a year and took a leave of absence because I felt so unprepared for an MFA program in stage design,” he said. “I had never taken a drama or art course in high school or college, so I was really green.”

He feels fortunate to have then received the opportunity to design an opera on speculation for Portland Opera. “The general director of the company liked my set design for Der Freischutz, so my design was built,” he said. “I was offered a position at Portland Opera and worked there for 8 seasons and designed 12 shows. I consider it my version of grad school, learning by doing.”

Serving the Portland Opera in the dual capacity as resident designer and production manager was a growth experience for Wong. “Important things I learned were to remain creatively flexible and nimble, to be adventurous and try out different materials, techniques, and approaches, and to treat set design like puzzle-solving,” he recounted. “Often the simplest and most elegant solution is the best.”

Transitioning to freelance work posed its challenges, as well. “One needs to be good at multitasking and time management. At first, you work at making sure that enough people know about you and hire you so that you can make a reasonable living,” Wong said. “Once you are known, the challenge shifts to being able to design multiple projects at the same time that are in different stages of development.”

Throughout his career, Wong has also taught as an adjunct faculty member of the University of Puget Sound’s Theatre Department and Seattle University’s Department of Fine Arts, as well as the University of Washington. “The thing I like about teaching is that one sees the energy, enthusiasm, and ingenuity of young creative people who will come up with new ways of looking at and interpreting dramatic works using whatever tools are at their disposal to execute their ideas,” he said. “They give me more energy.”

Wong encourages his students to go beyond the merely visual in their creations. “I want them to closely read scripts and be able to articulately analyze them and the ideas they contain,” he said. “I hope that they are able to translate the essential ideas of a play, opera, ballet, or devised work into their design rather than just creating a decorative container for the work.”

Of the many set designs that Wong has created throughout the decades, one of his favorites is a production of Mozart’s Don Giovanni with a Dia de los Muertos setting, designed for Portland Opera. “During this time, the legend of Don Juan is re-enacted in street theatre and puppet performances, and the idea that the Commendatore could be a mummy in a niche, like those of Guanajuato, instead of a stone statue made perfect sense,” Wong described. “I designed this show in 1980, a time when the Day of the Dead was hardly known about in America, so our production had a novelty and freshness of approach to it.”

Like his individual stage designs, Wong hopes that his upcoming showcase exhibit will have a compelling appeal that will allow it to travel. “I’m hoping that this exhibit will be picked up by a Puget Sound area museum so that it can be seen by Seattle patrons,” he said. “I have contacted the Wing Luke about it, and will continue to try to find a venue to show it in this area after it closes in Portland.”

Carey Wong: The World Transformed will be exhibited from April 2 – September 10, 2022, at the Portland Chinatown Museum, 127 NW Third Avenue, Portland.