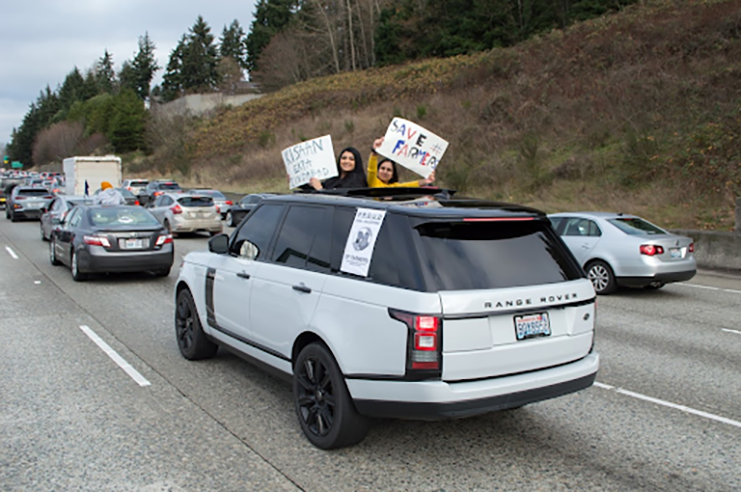 This past Sunday, a large group of cars gathered at the Gurdwara Singh Sabha in Renton, which serves 50,000 Sikhs in the region, as the meeting spot for a car march organizing in solidarity with farm workers in India protesting new agricultural laws. As the parking lot at the Gurdwara quickly filled, a long line of cars with bright orange flags and bold signs wrapped around the block waiting their turn to join the march. Some of the signs read, “Kissan Ekta Zindabad (Long Live Farmer Unity)”, and “NO FARMERS NO FOOD NO FUTURE.”

For the past 13 days (as of December 10), thousands of farmers from the Northwest region of India, including from Punjab and Haryana, have taken over the highways around the capital city of Delhi to protest three agricultural laws, and here in the region, they are also seeing support. These laws deregulate the agriculture market, and may lead to the dismantling of the Minimum Support Price system, which had protected farmworkers and their produce in the past. Farmers see these laws as detrimental to their livelihoods, stating that the laws would leave them without bargaining power and at the hands of large corporations.

Agricultural workers account for more than 50% of India’s workforce and have endured decades of plight due to climate change and rising debt and suicide rates. Those protesting in the capital city are prepared for a long haul, prepared to stay for months or more until their demands of repealing the laws are met. Their efforts helped mobilize 250 million Indians across the country to participate in a general strike on November 26 — possibly the largest in human history.

Here in the region, around 10:15 AM, cars began to file out of the Gurdwara and followed one after another closely onto the northbound I-405 ramp to the Bellevue Library. Cars honked in excitement and anticipation while their passengers waved signs outside the windows. The line exiting continued for another hour. During this time, traffic jams formed and caused 20-30 minute delays.

At many points along the route, groups of people stopped their cars and gathered on the highway shoulder, calling out what they felt were injustices against  Indian farmers.

Roopkirat Kaur is one of the founders of the UW Sikh Student Association (UW SSA), which is  a University of Washington-based student organization that aims to educate Sikhs and non-Sikhs about the customs, history and tenets of Sikhism. Kaur had not expected this volume of turnout. Rupinder Singh of the partner organization Blacklisted estimates that over 500 cars and 1,500 people turned out on this day to show solidarity with farm workers in India. Roopkirat emphasizes that although UW SSA may have been the face of this protest, this was a community organized effort among different Sikh youth: high schoolers, graduate students, and others from across the Seattle area, even Bellingham.

Organizers put everything together in five days. They formed a team dedicated to ensuring COVID-19 protocols were being followed, distributed information about the route, and created a playlist of songs written about the farmworker revolution.

Although organized by youth, their efforts reached a multi-generational crowd. There were families of young ones, elders, and many young people. Lovepreet Kaur, spoke about why it was important for her and her family to show up this day.

“I was asking my kids why we are supporting farmers, and I told them, if there are no farmers there is no food. It doesn’t matter if they live here in America or any other country, farmers feed the whole world.”

Satpal Purewal, an elder who was livestreaming the car caravan onto Facebook also stated why this day was important to him: “We all have to support each other when there is a human rights violation and when someone is grabbing the rights of hardworking people.”

At the end of the car protest route, people who participated gathered at the Bellevue Library to listen to speakers including community members and people from nonprofit organizations.

This was not the only solidarity protest in the U.S. A week ago in the Bay Area, a car caravan of hundreds protested outside the Indian Consulate in San Francisco. Roopkirat Kirat states, “If farmers in Dehli are still protesting, why aren’t we?”

More photos of the rally can be found on the UW SSA Linktree. UW SSA and Blacklisted plan to host another protest on December 13 at the Space Needle.