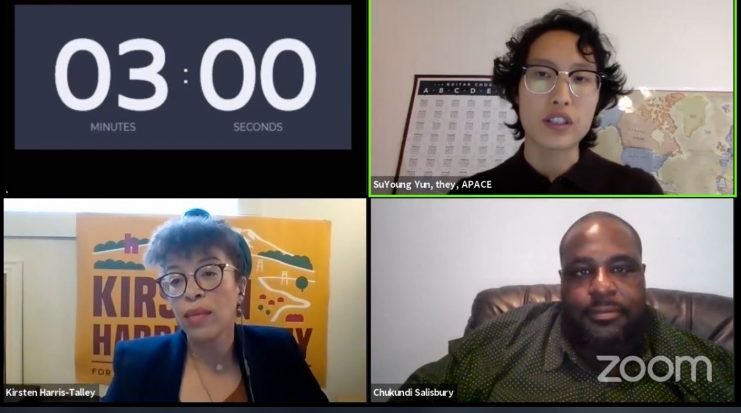 Candidates vying for two seats as Representatives in Washington’s 37th legislative district — which includes the Chinatown International District (CID), the Central District, north Beacon Hill, Rainier Valley, Columbia City, Renton, and Skyway — made their case before voters in the 8th annual AAPI Candidates Forum, hosted on Zoom this year due to the COVID-19 pandemic. A Facebook livestream of the forum can be viewed here.

Four candidates for the two seats, one of them a longtime incumbent, discussed how to address the state’s looming budget crisis, how to help renters and prevent evictions during the pandemic, and possible new taxes on corporations and the wealthy.

After Rep. Eric Pettigrew retired at the beginning of 2020, the contest for the 37th District’s Position 2 seat was without a long-time incumbent.

The two leading candidates are Chukundi Salisbury, a 21-year City employee, entrepreneur, and DJ; and Kirsten Harris-Tally, a reproductive justice advocate who works as executive director of NARAL Pro-Choice Washington and filled a vacancy on the Seattle City Council for 51 days in 2017. Both candidates are also long-time community activists.

In introducing themselves to voters in the virtual meeting, Salisbury, a project manager in the Parks Department and founding director of the Youth Green Corp, started with his extensive public service and volunteer activism, including work on police accountability.

Harris-Talley brought up her experience as a PTA mother in the 37th district, her work on reproductive justice, activism against King County’s youth jail, and her time on the Seattle City Council.

Salisbury and Harris-Talley called for further action to prevent evictions during the COVID-19 pandemic, agreeing that Gov. Inslee’s moratorium on evictions did not go far enough. Salisbury favored a stop to rent payments, and direct financial help for renters. Harris-Talley said the legislature needs to introduce more renters rights protections, especially in municipalities outside Seattle that have less protections, like Skyway and Renton, as well as create more affordable housing, prevent displacement, and introduce a wealth tax.

Both candidates said the legislature should introduce new progressive revenue sources. Salisbury proposed taking revenue from the marijuana industry, and defunding prisons, and putting money back into communities. Harris-Talley favors a capital gains tax to help fill the state budget deficit. “Anyone who has enough money that their money makes money is certainly not the folks who are most impacted with COVID-19 right now,” she said. Harris-Talley also noted that even with a new progressive revenue source, revenue would not flow in right away, and legislators would be facing tough decisions about cuts.

“Something has to go — there will be cuts,” Salisbury agreed. Harris-Talley and Salisbury both said they would prioritize protecting health and human services from cuts.

Harris-Talley it would be important to protect healthcare and dental programs designated for Washingtonians from Compact of Free Association (COFA) nations — Pacific island nations that were under U.S. control, the Marshall Islands, Palau, the Federated States of Micronesia (Chuuk, Kosrae, Yap, Pohnpei), and whose citizens can serve in the U.S. military, live and work in the U.S. She favored dedicated pools of funding for health and human services in general, so they would not be in danger of cuts. She also favors extending health insurance and looking at single payer healthcare models at the state level.

Rep. Sharon Tomiko Santos, who has held the district’s Position 1 seat since she was elected in 1998, defended her record against challenger John Stafford. Both candidates are Democrats.

Santos, who has represented the district for 20 years, said she is aligned with Stafford on progresisve revenue, but said her experience and deep knowledge of the district set her apart, as the daughter of an immigrant, a school child who qualified for reduced lunch and an anti-poverty program, and a community activist. “These and other formative experiences are the foundation of my passion for equity, for opportunity, and for justice.”

To prevent evictions and create more affordable housing, Santos has proposed creating a land bank requiring government bodies to set aside some surplus land for nonprofit developers, such as InterIm CDA. To address zoning and density, she favors inserting equity principles into Washington’s Growth Management Act (GMA), which she believes is out of date, and using the Housing Trust Fund to create a variety of housing units in every 37th District neighborhood. “Communities of color, historic communities, are increasingly targeted for displacement and gentrification,” she said.

Stafford said to keep housing affordable, the state should introduce regular minimum wage increases and jobs programs, such as accelerating the Sound Transit program. The state should push for zoning changes such as allowing Accessory Dwelling Units and Detached Accessory Dwelling Units, and an increase in the number of affordable housing units developers must build under the Housing Affordability and Livability Agenda (HALA) program. He believes the City and State government should provide public housing, and supports the City Council’s JumpStart Seattle big business tax. To address homelessness during the pandemic, he suggested the City could use unused stadiums to provide shelter.

Santos responded that she has sponsored progressive revenue proposals, including pushing for the last income tax ballot measure as a member of the finance committee and founding the Washington Tax Fairness Coalition. Santos favors an individual income tax, but also believes more progressive business taxes are necessary, rather than relying on the Business & Occupation tax, which is “grossly unfair” to small businesses in places like the CID. She would also seek a reduction in sales taxes if a progressive tax on individuals and businesses is implemented.

Santos said the state should reevaluate tax relief for big businesses and perhaps sunset some of this. Santos said she was proud to be the prime sponsor of the COFA healthcare bills in the House. “It’s important for us to remember that the peoples from the COFA communities were literally human sacrifices by the United States military,” she said. “We have a moral obligation to support the health of these people.”