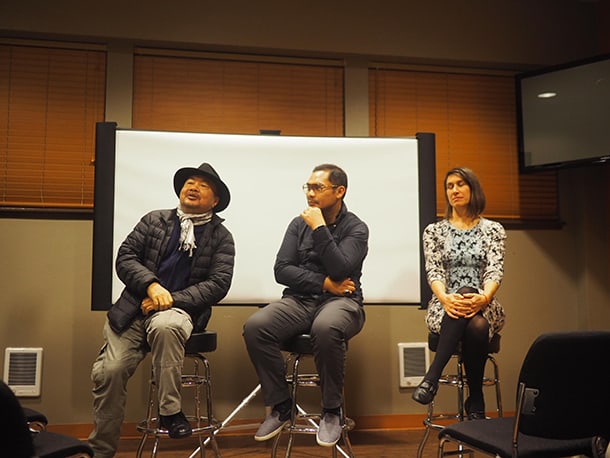 On Wednesday, December 6, Rajana Society, in conjunction with the UW Graduate School and the UW Southeast Asia Center, hosted a screening of First They Killed My Father, a movie co-written and directed by Angelina Jolie and produced by famed French Cambodian filmmaker Rithy Panh. The movie is based on the memoir of Luong Ung who wrote about her experience under the Cambodian Genocide. The screening was held at Mt. Baker Village, a 144-family apartment complex serving a diverse community, including a large population of residents with Cambodian descent.

Part of a larger program titled “Visiting Rithy Panh”, the screening was a companion piece to a video installation named The Age of Kampuchea, which uses archived footage donated to UW Libraries by journalist Elizabeth Becker. Becker was one of the last three western journalists who was invited to visit Cambodia during the reign of the Khmer Rouge. The footage and images for the video installation come from this visit. The screening of the movie The Missing Picture by Rithy Panh was also part of the program and was held at the Henry Art Gallery.

Rithy Panh, a Cambodian filmmaker whose works focus primarily on the effects and legacy of Khmer Rouge rule of Cambodia, also founded the Bophana Center, an organization dedicated to preserving Cambodian film, photo and audio history.

A diverse audience of different ethnicities and ages were present as filmmaker Rithy Panh arrived, accompanied by Professor Jenna Grant, one of the program organizers, who teaches Anthropology at the University of Washington. “I knew that I wanted to reach different communities, and I see him as Cambodia, diaspora, documentary, trauma… [there are] a lot of different conversations that he has participated in,” said Jenna Grant about Rithy Panh.

Unlike a traditional film screening, Jenna Grant envisioned doing a film screening “in the community that was more accessible to people,” some with lived experiences depicted in the movie.

Sameth Mell of Rajana Society, the principal organizer of the screening, recognized the power of this type of access. “[A] woman asked… ‘if survivors were ever able to find or relocate their families through the film screenings that has taken place?’ These examples are not something that can be produced when the film and producer are at a majority mainstream/white academic institution… it’s also important to understand that stories are understood in different capacities according to the audience that it reaches,” Mell said.

Following the show, Professor Grant and Panh offered to hold a Q & A about the film. But, when handed the microphone, elder Cambodian American community members who had personal connections to scenes depicted in the movie began sharing their memories and experiences during the war.

The Q & A also offered a powerful opportunity for survivors of the Cambodian Genocide to speak about their experiences for the first time. The Cambodian American community suffers one of the highest rates of PTSD, and many community members remain undiagnosed.

Discussing experiences during the genocide is still taboo to many in the community. At one point during the Q & A, a woman left abruptly and returned with a picture of her husband and talked about him and the last time she had seen him.

“It was a heartfelt moment. She shared with Rithy Panh and everyone else in the room, making the story that was just observed on film even more real,” said Evelyn Romero, a UW graduate student and audience member at the screening.

For younger Cambodian Americans, First They Killed My Father also provided a view into what their parents or grandparents may have went through. “In [a] way it is fulfilling…the film helped me understand my family better, I understand the silence,” said Sopheakvatey Chey, a Cambodian American student at the UW.

Aaron Meng, who lived through the Cambodian Genocide, saw this film as a way to connect a younger generation of Cambodian Americans to the legacy of their parents and grandparents, “It’s an important film… to remind the youngsters ‘what happened to my parents? Even in Cambodia, [young people] don’t know, even after all these years.”

First They Killed My Father is available now on Netflix.