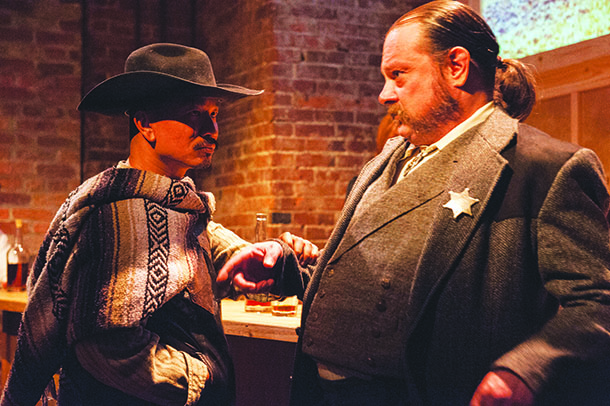 In the good ol’ days of American cowboy westerns, Asian Americans were never seen in the role of the cowboy. But Café Nordo’s Smoked! changes all that: in this local dinner theater show, local actor Ray Tagavilla plays the role of the prototypical cowboy, the Stranger.

Tagavilla describes the Stranger as deeply rooted in the American western tradition. “The Stranger is a character that Clint Eastwood made famous in spaghetti westerns and that’s who the character is modeled after,” Tagavilla said, “a mysterious anti-hero who walks into town seemingly just minding his own business but then gets caught up in the social hierarchy and politics of the area.”

But Tagavilla emphasizes that the Stranger is no mere passive bystander. “He’s a bit of a prankster and enjoys getting reactions out of people,” he said. “He’s an alpha male who has no problem dealing with the consequences of his actions if he’s pushed.”

Smoked! is Tagavilla’s sixth production with Café Nordo. “I keep going back to them because they’re willing to cast me,” he said. “Also, the archetypes are something I don’t come across too often like film noir detectives or gunslingers. In all honesty, it’s just a damn good time.”

Tagavilla says that despite the added pressure of performing as a dinner server as well as an actor. “I’ve never worked as a server in my life except anytime I’m doing a Nordo show,” he said. “I’m always anxious because of my stage fright but serving food to people without spilling an entire tray on them is a special kind of horror.”

But after so many roles with Café Nordo, Tagavilla is up for the challenge. “I come from the sketch comedy and improv school, so I’m always looking for new ways to connect physically and mentally with my scene partner,” he said.

Connecting means more to Tagavilla than speaking and projecting. “Listening is the absolute most important trait,” he said, “and without it, scenes look and feel lifeless. I try to always be attuned to nuances in the energy of the room and my scene partner and adapt accordingly.” And this is more important than ever, in a restaurant-styled venue in which performance and dinner coincide.
Smoked! runs from May 3 to July 1 at Café Nordo, 109 South Main Street, Seattle.