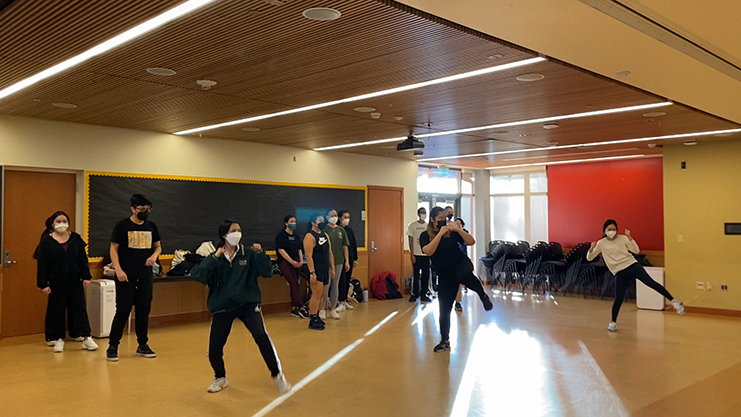 With the recent spike of anti-Asian hate crimes across the country and one-year anniversary of the Atlanta spa shootings coming up in March, some organizations are offering free bystander training and self-defense workshops for the AAPI community.

Anti-Asian hate crimes have risen 164%, in the first quarter of 2021 in comparison to the first quarter of 2020 in 16 of America’s largest cities and counties, according to a new study by the Center for the Study of Hate and Extremism at California State University San Bernardino. A national report by Stop AAPI Hate also said that the majority of these incidents happen in public, including streets and businesses. About 62% of all anti-Asian hate incidents are reported by women.

In King County, the majority of these crimes took place in public locations including highways, alleys, streets and sidewalks, with 11 out of a total of 29 crimes reported in 2020, according to data from the King County’s Sheriff’s Office.

The threat of anti-Asian violence since the start of the pandemic brings the local Seattle community together to come up with community-driven solutions to address how people can protect themselves and what actions to take as a bystander.

There are various ways that people can intervene as bystanders when witnessing a hate crime taking place against a person of a protected minority, according to Dax Valdes, one of the senior trainers at Hollaback!, an organization that provides bystander intervention training across the U.S.

In order to support the AAPI community during this time, Asian Americans Advancing Justice and Hollaback! have partnered to host free online bystander intervention training about ways that people can intervene to stop aggression towards Asian-Americans, including conflict de-escalation and how to respond to harassment.

“Bystander intervention is a proven methodology that we could argue is as old as time, and it’s the idea that people take care of people when bad things happen,” said Valdes. “But so often, when it comes to seeing those instances of harassment, we freeze because we may not know what to do.”

Whereas bystander training is often imagined as a way for people of privilege to intervene for people with less privilege, AAJC and Hollaback! hope that this training will empower AAPI people to intervene on behalf of each other.

“I want to recognize that many in our community may find themselves as a target in these situations, or be afraid that by intervening they can become the target,”said Amy Fry, Anti-Hate Program Associate for AAJC. “People experience public spaces differently, and that’s because of privilege. In some spaces, your privilege gives you more power than others, and that means you might be able to help in a way that others can’t.”

At the training, Valdes discussed the five D’s of bystander intervention: distract, delegate, document, delay and direct; strategies that bystanders can use depending on the incident.

Distraction is to take an indirect approach to create a distraction to de-escalate a situation; delegate is asking someone else for help; document is to create documentation of some kind by taking a video of the incident on your phone; delay is to check in with the person who was experiencing harm after the incident; and direct is to speak up about the harassment if it is safe to do so, according to Valdes.

The training sessions can prepare people with ideas and tips before they witness incidents of harassment either online or in-person. The training is being offered with translations and simultaneous interpretation in Chinese, Korean, Vietnamese, Tagalog, Thai and Hindi.

People who have faced hate crimes or hate incidents are encouraged to report their experiences to the StandAgainstHatred website, according toValdes.

While bystander training is about what you can do for other people, there is other training for protecting yourself.

Eckelberg, who said that there will be plans to have a free workshop at University of Washington this spring, said that whenever he teaches self-defense workshops, he always reiterates three main principles: physical and mental conditioning, situational awareness, and knowing our resources.

“‘Listen to yourself first’ is the main priority,” said Eckelberg. “Making sure you feel safe to act is number one.”

Eckelberg said that he hopes that after the free two-hour workshop, people will be inspired to pursue further self-defense training.

Mak Fai Kung Fu has partnered with multiple organizations in the past to hold these workshops. The most recent workshop was held this February in collaboration with UW’s Cultivating a Culture of Care Initiative, an event open to all students, employees and community members.

“I appreciated that there were a lot of other Asian folks in the workshop,” said Maeson Dewey, one of the participants at the workshop. “It’s good to see other Asian women being proactive and learning how to protect themselves. It felt like a safe space.”

At the self-defense class Dewey attended, attendees learned how to protect themselves with kick drills and stances and how to practice situational awareness through partner activities.

“Partner A would close their eyes and Partner B would walk around them, tap them and jump into a stance,” said Dewey. “The idea was putting us into a strange environment and trying to make sense of what’s happening to you.”

To find out when the next free workshop is, people can reach out to Mak Fai Kung Fu through Instagram or their website.

On AAJC’s website, there are links to other resources, including some from the Asian American Community on Anti-Blackness, and links to the local and national crowd-sourced AAPI Anti-Hate Community Resources.

While this effort focuses on Asian-American people, these resources are available for everyone, and it is important that people protect each other and work for social justice for all marginalized groups, according to Fry.